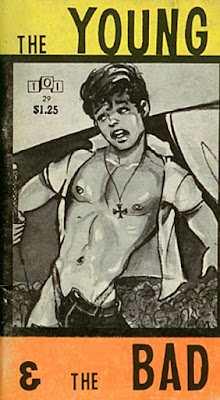 His is, of course, a non-traceable pseudonym. Censorship laws were strictly enforced, so writers frequently adopted non de plumes in order to escape prosecution.

101 Enterprises operated out of New York and published 48 books from 1967-69. The books were not bound and did not have a spine. Instead, they had a graphic wrap (a cover) and were held together with centered staples. The artwork varied greatly, though they typically relied on 'borrowed' images and illustrations. 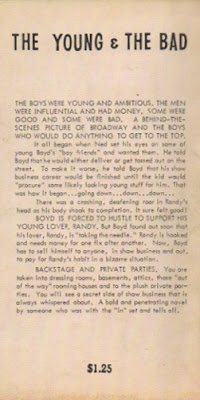 Back Cover:
"The boys were young and ambitious, the men were influential and had money. Some were good and some were bad. A behind the scenes picture of Broadway and the boys who would do anything to get to the top.

It all began when Ned set his eyes on some of young Boyd's 'boy friends' and wanted them. He told Boyd that he would deliver or get himself out on the street. To make it worse he told Boyd that his show business career would be finished until the kid would 'procure' some likely looking young stuff for him. That was how it began... going down... down... down...

Boyd is forced to hustle to support his young lover, Randy. But Boyd found out soon that his lover, Randy, 'is taking the needle.' Randy is hooked and needs money for one fix after another. Now, Boyd has to sell himself to anyone, in show business and out, to pay for Randy's habit in a bizarre situation.

Backstage and private parties. You are taken into dressing rooms, basements, attics, those 'out of the way' rooming houses and the plush private parties. You will see a secret side to show business that is always whispered about. A bold and penetrating novel by someone who was with the 'in' set and tells all."

Immediately brings to mind Valley of the Dolls - of which there should be a gay version. I am intrigued. Let's read...

Chapter 1
The tall, slim, blond man got off the bed, put on a quilted robe and started for the living room

“Yes,” the man said. His name was Ned and this was his apartment.

“Bring me back one, please.”

“Sure,” Ned said. He went into the living room, made two drinks, and returned with them. He sat on the bed and gave the boy his drink.

The boy sipped. His eyes, a clear blue, wandered over Ned’s face. He sensed something was wrong. “What is it?” he asked.

Ned looked into his drink. His blond hair was cut very short. He was close to forty. “It wasn’t any good,” he said.

“What do you mean?” the boy asked.

“That’s not so,” the boy defended himself. “You don’t know what you’re saying. You’re imagining things.”

“Ned, you know how I feel about you.” The boy sat up, thrust his hand inside Ned’s robe and started feeling his chest. He pinched each nipple in turn.

“Boyd, if I can only believe you.”

“You can, you can.” Boyd put away his glass, wrapped his arms around Ned’s neck. He pulled Ned down on top of him.

“Oh, to hell with it.” Boyd’s mouth brushed the side of Ned’s neck. “Let me show you how much I care for you.” He whipped open Ned’s robe and explored Ned’s breasts and nipples with his mouth. His lips found a rubbery nipple and concentrated on it.

Ned closed his eyes and felt the squirming body against his, felt the sweet sensations that rippled through him. “Take me,” Ned suddenly begged. “Take me. I want it now. Now. NOW.”

“Yes. Oh, yes.” Boyd kissed Ned’s mouth, then his neck and shoulders. His mouth wandered down the length of Ned’s body, kissing, nipping, biting. He fondled Ned’s manhood, which was rigid with throbbing passion. His mouth accepted the offering and Ned groaned at the sweet contact.

Ned dug his fingers in Boyd’s black hair and moaned deliciously. He heaved his hot body, driving his strength into that wet cavern of a hungry mouth. He felt teeth sink about him and he cried out as his passion sputtered away. He lay back, pleasantly exhausted.

—–
Mel James was having his early morning coffee when Ned arrived. “You look frozen,” Mel observed, pouring an extra cup of coffee.

Ned removed his coat. “It’s freezing outside. Close to zero, I’ll bet.” He sat down by the formica-topped table and sipped his coffee. “Just what the doctor ordered. Hot coffee to warm my frozen blood.” He grinned across the table at his closest friend.

Mel and Ned had much in common. They were both close to forty and they both liked boys. They had once experimented with each other and had found the affair distasteful. They realized then that they needed young boys and not hardened old queens like themselves. The short affair had left them a bit wiser and much closer. It was not on a friendship basis and that made it all the better.

“Mel,” Ned said, putting his coffee cup back in its saucer. “Did you ever get the feeling that something wasn’t quite right?”

“I had that feeling last night,” Ned said. “I had a go at Boyd and there was something missing. On Boyd’s part. When I told the kid that his heart wasn’t in it, he became very aggressive in his lovemaking. But I believe the whole thing was forced.”

Mel finished his coffee. “You think there’s someone else?”

Ned snorted. “You think he’d tell me? I pay the bills, remember?”

“I need proof. Besides I’m kind of attached to him if you know what I mean.”

“You should kick him out now,” Mel said with feeling. “Before you get the proof. You might get hurt otherwise.”

“I couldn’t be that unfair to anyone.”

“What do you mean?” Ned asked, puzzled.

“You’re too kind that thoughtful,” Mel explained. “We’re despised by the so-called normal type. We’re mocked, laughed at, and shunned. We’re social pariahs. All that makes us hard and uncompromising. And along you come, ready to break the mold. You, my angel, are kind, sincere, and thoughtful. Disgustingly so. You turn the other cheek. You have . . .”

“Hold it,” Ned laughed. “I believe I’m normal in most respects. And being normal means being kind and thoughtful. My sexual desires may not be healthy as far as society is concerned. But I can’t help that. I’m not worried about that, about what normal people think about me. I live my life the way I want to.”

“Well, the problem of Boyd is yours,” Mel said pointedly. “You aren’t going to listen to me so that’s that.”

“I’ll listen if you’ll tell me something constructive. But to kick the boy out without a shred of evidence–that’s too much.”

“Let’s drop the subject,” Mel said. “We aren’t getting any place, it seems. How about going shopping? I saw a beautiful plaid smoking jacket uptown in the window of . . .”

“Shopping? In this weather? You must be mad.”

“It couldn’t be that cold.”

“I can go to my shop but I don’t feel like it,” Mel said. “Besides, Peter can run things without me.”

“I always meant to ask you. About Peter.”

“I know the question, love. The answer is yes. Peter is charming. Maybe, perhaps, someday, I’ll let you taste his charms. His goodies.” Mel laughed.

“Is that why you hired him?”

“Of course. And listen, sweet, I’m having a party tonight. I’ll expect you. And do bring charming Boyd, won’t you?”

The writing is very, very stilted; like a high school freshman's attempt at writing a novel. You can tell the teacher returned it to the student with a note..."include more adjectives", and the student immediately complied, dropping one or two in front of each and every noun.

"Ned closed his eyes and felt the squirming body against his..." - THAT is not sexy. It makes it sound like he's being attacked by an electric eel.

"They realized then that they needed young boys and not hardened old queens like themselves." - Oh, that old trope. What are they? Vampires?

Mel is a bit of a bitter pill. And, when avoiding conflict, he employs one of the oldest tricks in the book: let's go shopping! (In the movie? I get to play him.)

And I like how the author wasted not a word letting us know who any of these people are, where they are, what they are... is that... a writing strategy to get you to read on?
If I hadn't read the back cover I would have had no idea what was going on.

The question is... would you read on?

I would because I love me a good laugh and I suspect this book is positively 'squirming' with unintentional ones.
--- ---
Well, those are my thoughts. Share yours in the comments section.

That's all for today, children.

Thanks for reading!
Valley Of The Dolls - Generation X
Posted by uptonking at 6:00 AM

Well, that was something.
The whole 'they got together but it was distasteful cause they liked boys' part... Phew!
And the formica table top and the smoking jacket! So of the time.