Who Did It Better? Alfie 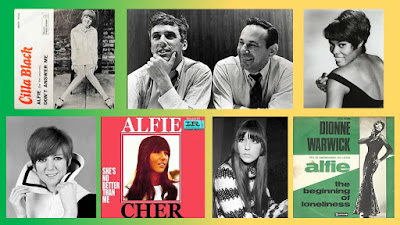 Legendary producer, Thom Bell would help The Delfonics record their version. It would end up as the B-side for their hit Break Your Promise in 1968. However, in 1973, it would be released as an A-side, generating some heat on the R&B chart with a peak at #88.

Now, THAT'S a story!
I could not believe that was Cher!! I should get some of her first records.
That Cilla Black version? Whoa. Demented rodent is right. I felt hyper just listening to it.
Dionne Warwick!!! I am totally committed to going out this weekend and getting the record where she's singing this. I have suddenly discovered I need more Dionne in my life.

P.S. of course Barbra did this, too.

Cilla Black is my favorite.
Cher promoted the song/movie with TV singing appearances.
Babs version to me was just a cover.

Holy crap! Who knew?
I love the opening flute on Cher's, but that's about as far as it goes. I do like her tone in the opening bars, though. Cilia's just doesn't do it for me - at all.
I may be a humongous Babs fan...and she can tell a story through song. But...
Even I have to give this one to Dionne Warwick. The arrangement, her clear-bell tones, and the powerful delivery of the story all make it the best version.

I will always love Barbra Streisand and whatever she does.

My drag background has me liking the Cilla Black version the best, with it's pep.

I love Cher and couldn't believe that was her.

And Dionne Warwick? Never, ever, have been a fan of her. She seems to be another popular singer with many, and I seem to always go against the grain with. I find her to mopey.

I’m enjoying these comparisons very much. Great job making this happen.
One has to agree that Dionne made this song her own. I always enjoy the “wall of sound” Specter etc. but Sonny really fucked that concept up big, kitchen sink indeed.
Sorry I respond latish, I hope it doesn’t cause too much trouble.