Who Did It Better? Private Life 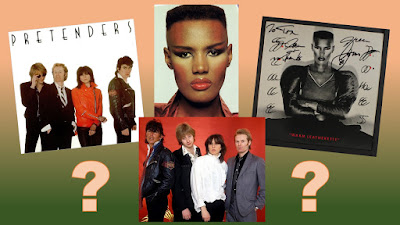 I adore my gin blossom Jon and his blogs!!!!!

As much as I love and enjoy Grace Jones, I'm an even bigger fan of the Pretenders....and I agree with you. I liked both but the Pretenders bring something to their music I just can't get enough of.

I love Grace Jones!
I had no idea that it was The Pretenders who actually recorded this song first! I think I agree with you when you say that Chrissie's vocals are much more up front than Grace's and that gives The Pretender's version the win.
Still, Grace Jones!

I prefer the lower tone of Grace's voice.

I love Grace Jones but you enjoyed her music more in live performances or video.

I will always love Grace Jones.

Wow, these two are carrying memories from the young man I was.
I loved both versions and still do, each for the ambiance they procure according to the mood one is in.

I remember that I would listen the one from The Pretenders preferably alone, like it fueled the narcissist side of a teen enjoying symbols and attitudes that made him 'obviously different' and therefore interesting in his bubble. So very posing, the cute simpleness of being 17.
Hynde's voice had that way of intimately confiding in me to tell her story, while provoking me and daring me to face new experiences. She arouses feelings for one can think she addresses us and us alone. I fully agree in this that she leads and masters the song. Her narrative comes first, and the players enjoy following her.

On the other hand, Jones' cover shines a (spot)light on what a carefree (and sometimes reckless) young guy loves to do: going out and having fun with friends. Grace Jones will forever be an icon of my nights out back in the days, both private parties and clubbing. Jones' version of Private Life was perfect material to dance to, her strong and trendy imagery being carried by the rhythm of that splendid arrangement. Both lascive and provocative, an appeal to let the body move freely and show off to seduce. At the very first notes most of us boys and girls would stand up and start to move.
Again I agree, her voice blends more than it leads the purpose. She kind of accompanies the song, as if she had been chosen for it, and not the other way around, and for a specific purpose: both a dance floor hit and a sensual moments background.

Curiously I cannot choose one over the other, for they are so apart that they seem to be two completely different songs, hence my two ballots in the box.
Thanks a lot for making me listen to them at breakfast time, I know my day will be a fine one with their voices in my head :-)

It's Grace Jones' version for me. It's the synths, the more exotic take, and the more atmospheric overall sound that does it.