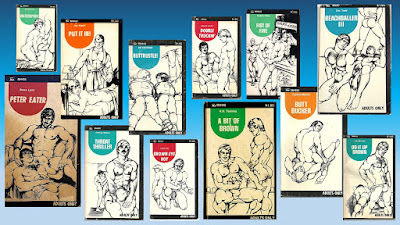 Acquired Tastes XLIII:
Gay Pulp Fiction, Part 69
Manhard Books, Part 4 of 6
Again, today, we'll be examining the Manhard imprint from Surrey House, Inc. / Surree Ltd, Inc. of San Diego and Santee, California. These books were distributed by the same company as Trojan Books and Gay Way Books; the Zorro Distribution Company, also operating out of San Diego.
At this point, I am not sure that all these imprints aren't related. I say this because I recently purchased a Gay Way book and when I looked in the back of the book, where they offer other titles to purchase, they'd listed titles from all the various imprints Zorro Distribution Company dealt with, including the HIS series, which we have yet to take a look at, but are tied to Surrey House, Inc.

The style of the cover art would only change once near the end of the imprint's life. All the black ink line drawings appear to have been done by a single artist, or a pair of artists with similar styles, whose name(s) remain(s) unknown. Sadly, there are also a number of covers I have been unable to locate.

Here are another dozen (or so) titles: 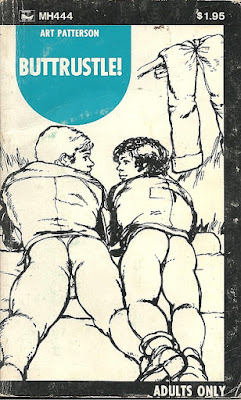 Buttrustle!
Author: Art Patterson
MH444
If this had been an extra curricular activity offered at my high school, I am sure to have made the team. I wonder if we would have been divided up by weight classes or if we'd get a shot at the big boys, too. Well, my fantasy, my rules. Everybody has to wear a singlet with a slit in the front and a slit in the back. I tell you Gay High School would have been so much fun!
--- ---
(Cover Not Found)
Beachballer II
Author: Eric Todd
M445
--- --- 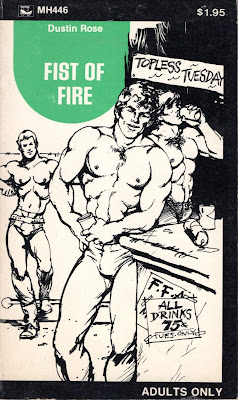 Fist Of Fire
Author: Dustin Rose
MH446
That title? If this is about boxing or martial arts - then that is appropriate. If this is about a certain activity that requires a fist and a tub of Crisco? Then fire is not what you be wantin' sugar. You want balm. You  want fists of calm. Let that Crisco work its magic and just relax. And you best pray he washed his filthy, filthy hands and has recently trimmed his nails. Should he be clutchin' anything in his other fist, let's pray it's a fresh bottle of poppers. Can I get a GAY-men?
--- --- 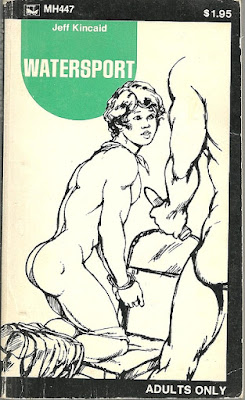 Watersport
Author: Jeff Kincaid
MH447
Not exactly the illustration I would have expected for this little opus based on its title, but whatever. Again... If this had been an extra curricular activity offered at my high school, I am sure to have made the team. And based on what appears to be the age of the kneeling soon-to-be recipient? I am thinking, yes... yes, we are indeed in high school. Let's just hope 'Coach' allows us to shower before that long bus ride home...
--- --- 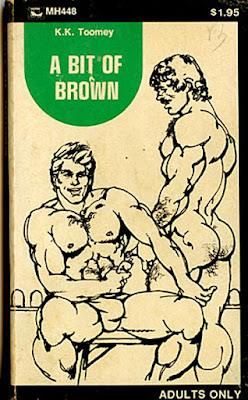 A Bit Of Brown
Author: K.K. Toomey
MH448
I think I may have hinted that this imprint has a thing about 'brown?' And we ain't talkin' the color used on the cover. No... see, I am more than comfortable with 'butt stuff.' But I do draw a line... and I mean, a big, thick, long line when it comes to 'brown.' Now, if you have no such aversion, more power to you. People have a right to enjoy what they enjoy, consenting adults, yadda, yadda, yadda. I certainly have my share of kinks and would never put anyone down because of theirs. However, when and if we ever get to that color in the crayon box? I'm out.
--- --- 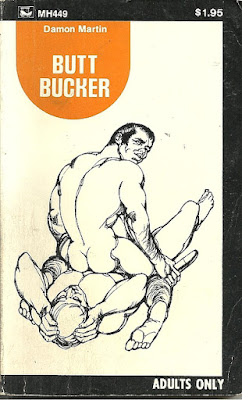 Butt Bucker
Author: Damon Martin
MH449
I like the idea of this. A butt bucker. It would be like a rodeo where bottoms wearing cowboy hats ride bucking broncos of a different sort. He who 'stays on' the longest wins. I volunteer to be the rodeo clown who distracts the riled up bronco as the injured bottom make his way off the mat. And should a butt bucker ride his beast until such a point that the beast is 'tamed?' I also volunteer to do clean up. Cuz I run a clean house!
--- ---
(Cover Not Found)
A Sucker For Boys
Author: Samuel West
MH450
--- --- 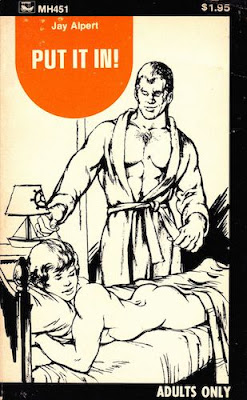 Put It In!
Author: Jay Alpert
MH451
Wasn't that the title of John Travolta's first single? Oh, no... that was Let Her In. That cover? It looks to be a possible case of some serious Daddy raping to me. No? Uncle? I don't know why... but 'uncle' seems a lot more acceptable to me than 'daddy.' It's all scary to me, but for those who get a thrill from the fantasy of it all? More power to 'em.
--- ---
(Cover Not Found)
Tonguing Tony's
Author: Loren Sanderson
MH452
--- --- 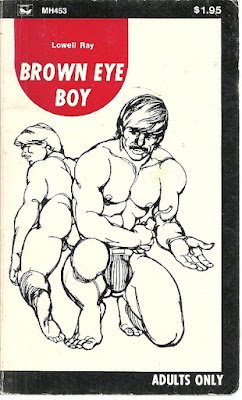 Brown Eye Boy
Author: Lowell Ray
MH453
More brown...  and I immediately thought of the old Van Morrison chestnut, Brown Eyed Girl, but that ain't it, babe. In this case we are talking the old brown eye, which is a vista of entirely different sort.
--- --- 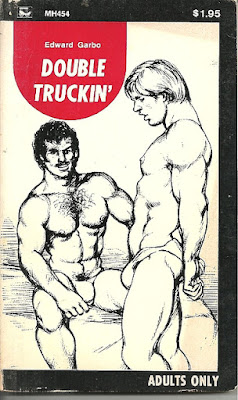 Double Truckin'
Author: Edward Garbo
MH54
Now, I have heard of pulling a train, but double truckin'? I do believe we are talking about a four-gy that takes place in the shower room of a truck stop. Oh, to be a fly on that wall! Especially if that hunky, dark-haired devil sitting on the bed is involved. Woof! Thank you, 'Mr.' Garbo.
--- --- 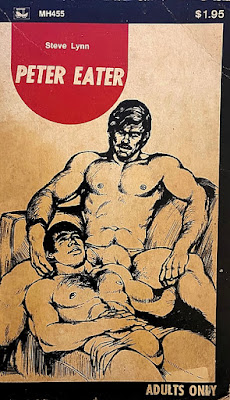 Peter Eater
Author: Steve Lynn
MH455
If Peter Piper, the man who picked a peck of pickled peppers met Peter Peter, the eater of pumpkins and fell in love? Something tells me the garden they share would be pretty neglected, though they could both claim this book was about them!
--- ---
(Cover Not Found)
Cocke Balls
Author: Damon Martin
MH456
--- --- 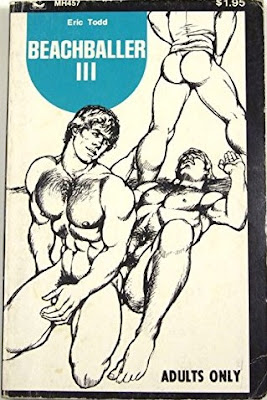 Beachballer III
Author: Eric Todd
MH457
This is the third and final installment of this mini series. It's a pity I couldn't  locate the second book. Funny thing is, it took me forever to catch on to exactly what that title was referring to. Yes, sometimes I am slow to catch on. But trust me... if there were such a beach? You know I would come prepared and be there every day.
--- --- 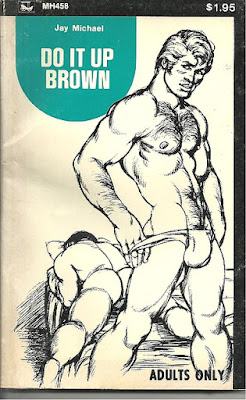 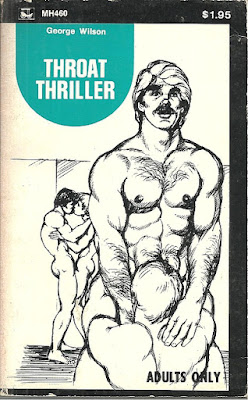 Throat Thriller
George Wilson
MN460
This is the story of when a skilled tool master meets a talented mouth. In the mid-seventies, CBS optioned this tiny opus as a vehicle for Paul Lynde and Tony Randall. However, when Lynde presented Randall with the opportunity, unsurprisingly (based on Hollywood gossip), he gagged.
--- ---
And that's all for today. Next week, another baker's dozen with a lot of missing covers. Hey, I do what I can... but apparently its not true when they say that everything can be found on the internet.
Until then...
Thanks for reading!
Brown Eyed Boy - The Hillbilly Moon Explosion
Posted by uptonking at 6:00 AM

Double Truckin and Throat Thriller got my attention. But, those titles wit"Brown" in them is a turn off.

Oh, I love the covers!
Totally in sync with the clone wars. Very Tom, too. And they got very daring. The whole 'Brown' thing, too. Whoa.

Brown doesn't interest me at all. But, I suppose if your publishing and distributing, I guess you have to satisfy all the fetishes.

Brown. Haha yes I am in agreement with you and Jimmy. What was Farley Granger's bio called? Include Me Out. Yes. Otherwise, this dizzyingly thorough arrangement of titles (do LOVE that cover art!) reminds me of what is called 'The Chicago Cluster'. I'm shifting to analogue camera nerd, but to shorten the story - it was one camera manufacturer and MANY brands. Sort of the same incest going on here, maybe? :)