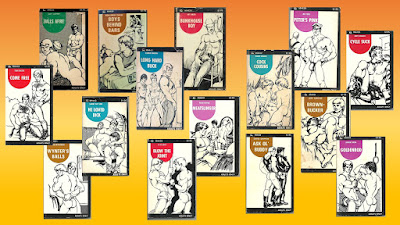 Acquired Tastes XLIII:
Gay Pulp Fiction, Part 68
Manhard Books, Part 3 of 6
Today, we'll continue to examine the Manhard imprint from Surrey House, Inc. / Surree Ltd, Inc. of San Diego and Santee, California. These books were distributed by the same company Trojan Books and Gay Way Books used; the Zorro Distribution Company, also operating out of San Diego. And, at this point, I am not sure that all these imprints aren't related. I say this because I recently purchased a Gay Way book and when I looked in the back of the book, where they offer other titles to purchase, they had listed titles from all the various imprints Zorro Distribution Company dealt with, including the HIS series, which we have yet to take a look at, but are tied to Surrey House, Inc.

The style of the cover art would only change once near the end of the imprint's life. All the black ink line drawings appear to have been done by a single artist, or a pair of artists with similar styles, whose name(s) remain(s) unknown. There are also a number of covers I have been unable to locate.

Here are another dozen (or so) titles: 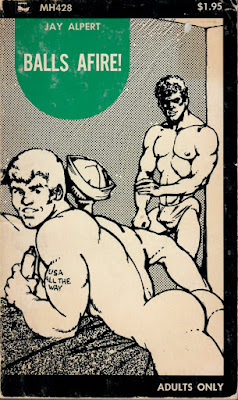 Balls Afire!
Author: Jay C. Albert
MH428
Found a copy of this for sale... $140! A little rich for my blood. So, based on what we've seen, for this imprint: bare ass is acceptable, but penises are not. I can live with that. This artist has a way of making every ass look spankable!
--- ---- 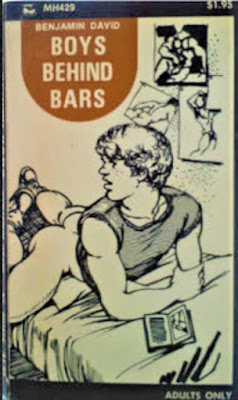 Boys Behind Bars
Author: Benjamin David
MH429
Oh, we lucked out with this one! We get treated to a detailed plot synopsis by 120 Days Books own Maitland McDonagh:

Sluts in the slammer stories are the sugar cookies of smut: Dependable, basic gratification. When you buy a book called Boys Behind Bars, you know what you're getting, even before the back-cover blurb spells it out: "Take one detention cell and fill it with horny boys and something is going to happen… fast! As quick as his faded uniform was stripped from his body, he was thrown face down, and held there… until every boy in the cell had it!" Except when you don't… Benjamin David's apparently formulaic adults-only pulp is something altogether stranger and more moving than you'd have any reason to expect.

Sweet-faced, 16-year-old Tod Custis, a math prodigy from Champaign, Illinois, wafts into Dorm 3-C of St. Elmo's Reformatory (named for the 3rd-century martyr associated with luminous electrical sparking) on a cloud of sleazy tabloid celebrity: The smart money says this slim, brainy newbie, convicted of killing his parents, is no match for eleven hardened delinquents aching for a piece of his famous and no-doubt cherry ass. The smart money, however, is wrong. Custis is tougher than he looks -- way tougher – along with more ruthless, disciplined, devious, sex savvy, manipulative and image conscious, which is where self-taught rocker Billy Joe Winslow, a handsome blond with violet eyes and a knack for tailoring prison rags so they show off a fellow's manly assets, comes into the picture.

Within weeks, Custis is in a position to do cushy time: He's got power, privileges and Winslow, a great lay, good time and kindred spirit. But staying isn't an option: Born into poverty, incest and abuse, Custis caught a once-in-a-lifetime break when a teacher spotted his gift for math and lost it to his degenerate biker dad, Rod. Rod caught his wife with her lover, beat them both to death and staged the crime scene to implicate Custis. Smart by nature and brutalized from birth, Custis has been plotting revenge for a long, long time, but Winslow has thrown him for a loop. Blindsided by something that seems an awful lot like love, he lays his cards on the table – he doesn't want to leave St. Elmo's without Winslow. Common sense says that small-time offender Winslow should stay put, serve his penny-ante time and walk away free and clear. But it's not about logic for him, either, so that's that.

The escape goes smoothly until their getaway car blows a tire, but fate is in a benevolent mood: A silver Mercedes materializes out of the two-lane darkness, with rich, horny, drug-addled hippie poet Yseult Homann-Potter at the wheel. She not only gives the lost boys she dubs her "lambs" a lift to Chicago, but installs them in the deluxe digs she shares with her twin brother, Tristram (how creepy is that?) and introduces them to life in the divinely decadent lane. And this is where Boys Behind Bars takes an unlikely detour, leaving the high-octane, couple-on-the-run highway for the thorny back roads of relationship work. It's going to take a whole lot of negotiating if the fairy tale romance that blossomed in the hothouse of St. Elmo's is going to survive in the real world. Who'd have seen that coming? 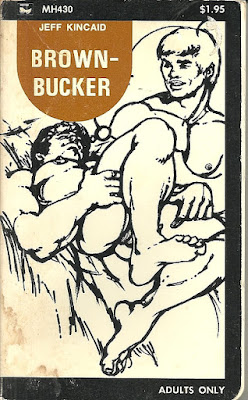 Brown-Bucker
Author: Jeff Kincaid
MH30
This is the first title in the series to use the term 'brown'. I don't think there's anything ambiguous about what they are referring to, but I could be wrong. In any case... count me out. I, personally, don't find it sexy. If I recall correctly, this will not be the last time this term is used in a title for this imprint.
--- --- 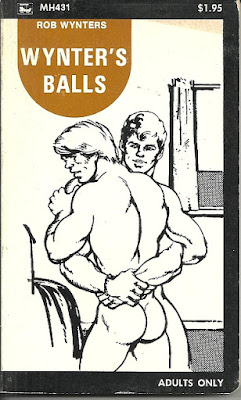 Wynter's Balls
Author: Rob Wynters
MH431
Third in the series. I wonder what the red carpet at these events looks like? Those two appear to be practicing their dancing.
--- --- 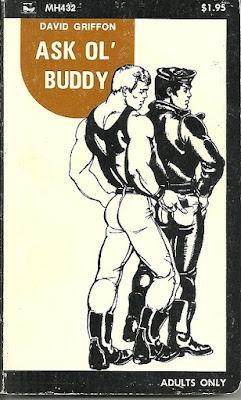 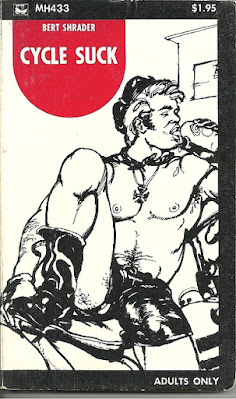 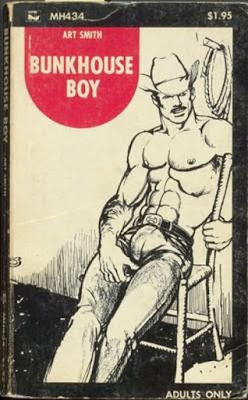 Bunkhouse Boy
Author: Art Smith
MH434
Some very striking cover art! I'm rather amazed that all of these illustrations, sans title, etc., are not collected in a coffee table book. Of course, it would be nice to know the illustrators name, so proper credit could be given. They certainly have a way with paper and ink.
--- ---- 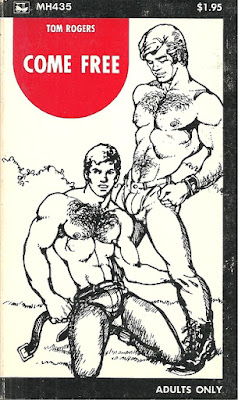 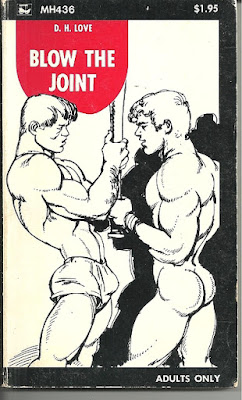 Blow The Joint
Author: D.H. Love
MH436
Oh, for the number of times I have walked into a bathhouse and exclaimed to my companion... "Come one! Let's blow this joint! Is that a baseball bat the two are holding? One would think they'd have better things to grasp.
--- --- 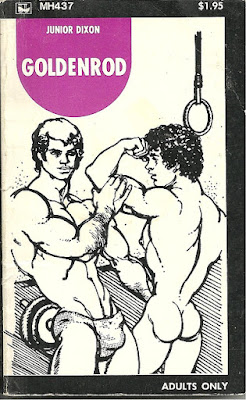 Goldenrod
Author: Junior Dixon
MH437
Sounds like the name of an X-rated James Bond film. Usually, I have an allergic reaction - to both goldenrod and James Bond films - but this little gym-inspired tome looks to be right up my alley. And from the looks of things on the cover, that's exactly where the dude on the left is looking to explore. That's my kind of workout!
--- ---
(Cover Not Found)
Black Meat
Author: Joseph Kirby
MH438
--- ---- 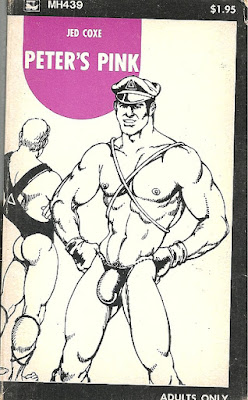 Peter's Pink
Author: Jed Coxe
MH439
Oh, it looks like a a fashion show to me! Work that catwalk! I wonder if Fashion Week includes fetish gear? It should. Personally, I would love to see who's sitting front row for that. Something tells me Anna Wintour would definitely be there! You know she's got a secret...
--- --- 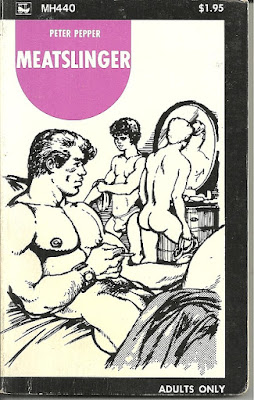 Meatslinger
Author: Peter Pepper
MH440
Huh. That one figure in the background appears to be fairly young. Apparently our meatslinger likes his meat a little underdone? As for the meatslinger? I for one would love to see what's hanging in his meat locker.
--- --- 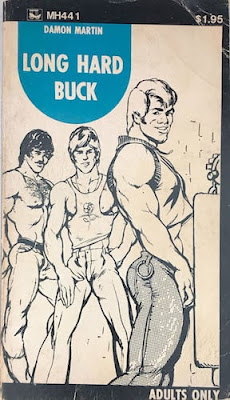 Long Hard Buck
Author: Damon Martin
MH441
Oh, another tea room romance! I have been fortunate enough to have had dozens and dozens such affairs. Granted, they only last ten minutes or so, but then when engaging in such activities?  Time is of the essence! Besides, just because it's brief, doesn't mean it didn't mean anything. I mean... quality counts for something! 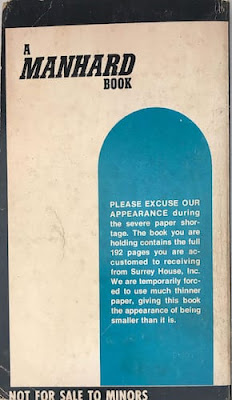 This message would appear on the back of the imprint for a period of time. Seems there was a paper shortage back in 1974? They appear concerned that readers would be upset that the books were not as thick as usual. That's probably based on market research. I'm sure it showed that, for their readers, thickness, indeed, mattered.
--- --- 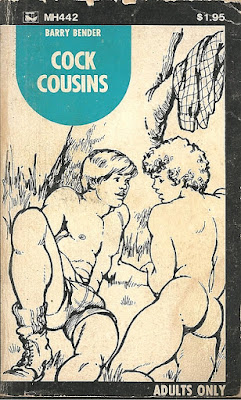 Cock Cousins
Author: Barry Bender
MH442
I must confess... I made an awkward pass at one of my cousins once. He was sort of the black sheep of the clan - which is saying a lot! I'd caught him jerking off with two of our other cousins, only he didn't see me. So, later I thought, why not? It did not go well. In fact, he ended up hiding under my bed so I would leave him alone. For years after, I would see him at family functions and die inside. But when I said hello to him at his Mom's funeral many, many years later... he was grateful and apparently didn't think anything of it.
--- --- 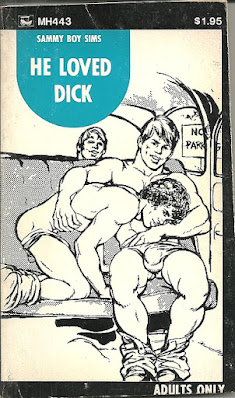 He Loved Dick
Author: Sammy Boy Sims
MH443
He'd do anything for Dick. That's how much he loved Dick.
I can relate. You have no idea what I've done for Dick... or Hairy... or Lance... or Shaft.
--- ---
And that's all for today. Next week, another dozen Manhard covers.
Until then...
Thanks for reading!
Great Balls Of Fire - Dolly Parton
Posted by uptonking at 6:00 AM

I really like these covers much better. Very beefcake-y.
And only 100 titles in six years! But it's understandable, being one-handed reading and all...
The whole cousins thing? I had one second-removed cousin jerk off in front of me once. I can still remember it clearly.

These are great. Barry Bender being my favorite author.

I love the covers and I love Dolly.

Interesting use of color to grab attantion.