Who Did It Better? We're All Alone 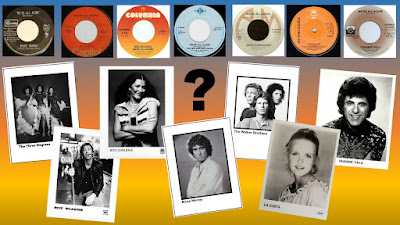 Who Did It Better?
We’re All Alone
Today, we're taking a look at a classic ballad from the mid-seventies; a song which got plenty of attention upon it's initial release, but was not released as a single by the artist who wrote it and first recorded it. Instead, it would wind its way through the careers of six other artists before landing in Billboard's Top Ten and becoming an international hit.

We're All Alone is a song written by Boz Scaggs. It initially appeared on what is considered his breakthrough album, Silk Degrees. Released on February 18, 1976, the album would produce a number of Top 40 hits, however, We're All Alone would not one of them, as it was relegated to the B-Side of his hit, Lido Shuffle. However, in Australia Scaggs issued the song with Lowdown as the flip to become a double A-side chart entry which reached #54 in 1977. This would mark the only time the song charted under Scaggs' moniker.
A bit of trivia: In a 1976 interview with Creem magazine, Scaggs mentioned that Michael Jackson had cut a version of We're All Alone. However, as of this writing, that recording has yet to see the light of day.
Frankie Valli recognized the hit potential of the song, recording it for his 1976 Valli album and releasing it as its lead single. In August of 1976, his version had peaked at #78 on Billboard's Hot 100, while reaching #27 on the Adult Contemporary Chart. It experienced similar success in Canada. In July of 1976, he released it as a single in the U.K.
In October of 1976, The Walker Brothers, a group  Scaggs' has cited as a formative influence, released the song as a single from their Lines album in the U.K., where it failed to chart. However, ten months later, in August 1977, it did manage to reach #22 in the Netherlands.

The Three Degrees recorded a version for their album Standing Up For Love. They released it as a single in the UK in March of 1977. That same month, stateside, country western singer La Costa (Tanya Tucker's sister) would release We're All Alone, reaching #75 on Billboard's Country chart. It would also be included as the B-Side on her cover of Smoky Robinson's chestnut, I Second That Emotion, which was released as a single in the U.K.
La Costa was not the only sibling of a famous singer to record the song and release it as a single. In Canada, Bruce Murray (Anne Murray's brother) managed to crack the Top 40 with his version of the song. However, it got knocked off the charts the moment Coolidge's version began its ascendency.
In 1977, it was suggested to Rita Coolidge that she record the song. Coolidge had worked with Scaggs on two of his prior albums, not only providing back-up vocals, but also directing and arranging all the backing vocals for both albums.
According to Coolidge, "When I was with A&M Records, it was like a family. I would visit Herb Alpert and Jerry Moss, and it was a very open, communicative group of people. One day I was in Jerry Moss' office and he said that the Boz Scaggs album, Silk Degrees, was in a million homes and there was a song on it that was perfect for a woman to sing. He said, 'It's called We're All Alone and as he's not doing it as a single, I think you ought to record it.'"
It was Coolidge's slow southern charm that did the trick, as hers would prove to be the bestselling version of them all.
Issued as the second single from her 1977 Anytime,.. Anywhere album, We're All Alone would hit #7 in the U.S. that September. It was the third time the song had been released as an A-Side in the U.S. In addition it managed to out perform La Costa's version on the Country chart, reaching #68, and grabbed the #1 spot on the adult contemporary chart.
In the U.K., where it was released as the lead single from the album, hers would be the fourth time the song had been released as an A-Side in that country. Even so, her version struck pay dirt, snagging the #6 spot in August 1977. It would also reach #6 in Ireland, #15 in the Netherlands, #32 in Australia and #34 in New Zealand. In Canada, it took the #5 spot on their pop chart and #1 on their adult contemporary chart.
And that's the whole story.

Now? On to the competition...
The Song: We're All Alone
The Competitors: Scaggs vs. Valli vs. The Walker Brothers vs. The Three Degrees vs. La Costa vs. Murray vs. Coolidge

Oh, there are so many artists I'd like to hear tackle this. The Walker Bros brought the best intro, but the vocals aren't much. I thought I would like Valli's, but he doesn't cut it for me either. Coolidge takes it for me.

I wasn't aware of the song, but I agree too I like the Rita Coolidge version the best.

Ok, I'm a romantic. I loved this song when it first appeared. I prefer a male voice, but Rita Cooledge, who could not love that version. But I'm stiking with Boz. His sound was true to the era.

This was a fun one, Upton.

Ohh
Never heard the song before, TBH.
It sounds very 80's in most versions and I actually liked the Walker Brothers' version? That tells you I know nothing about music.
Rita's version is cool, though.

I was always sure this was Ann Murray. I’m terrible at this name game. I have warm memories of this song but I guess it’s been Rita this whole time. Explains why I could never find it. Had the song title wrong as well. Ive got to stop worshiping the Goddess of Chaos. Great blog, enjoy you every day.