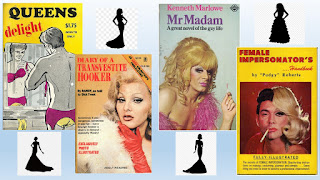 Acquired Tastes XLIII: Gay Pulp Fiction, Part 36 -
It's A Drag Edition / 1 of 2
I thought we'd take a little break from examining various gay pulp fiction publishers/imprints and take a look at a specific sub-genre I found rather intriguing.

It appears, back in the late 60's to early 70's, the terms female impersonator, female mimic,  drag queen and transvestite were considered somewhat interchangeable. And while I am sure there were personal preferences, defined nuances, and actual distinctions, there was also the matter of whether it was to be considered 'queer'. For there was and will always be a percentage of the cross-dressing population who identify as solely heterosexual, and for them, given the intolerance prevalent at the time, that was of great import.
An uneasy divide seemed to exist between the two camps, with heterosexuality (as per usual) being the less objectionable categorization. As for transgender folk? I am thinking that whole topic a bit too technical for what any of these practitioners, writers or publishers had in mind.
So, today, I would like to look at a couple of non-fiction entries dealing with female impersonators, female mimics,  drag queens and transvestites . We will also learn a bit about two pioneers in the field; female impersonators who utilized their skills in conjunction with print media in order to further build their brands.
As always, I thought this would be a lark, but instead? I fell down a rabbit hole while doing research. This is interesting, historically-significant stuff to which I want to do, at the very least, half-ass justice. So, yes, this is a little more involved than I initially wanted to get... but it is interesting.
So pay attention! Eyes forward, pencils down! And you... in the back? That better not be chewing gum in your mouth!
Wait... YOU! Pam Demic! What is that in your mouth? Tsk, tsk.

Anyway, I am intrigued and dying to take a peek. So, shall we? 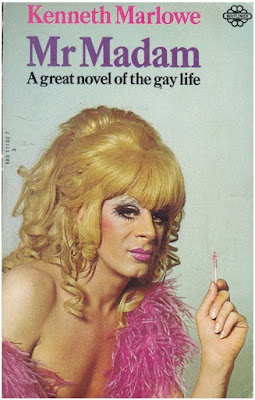 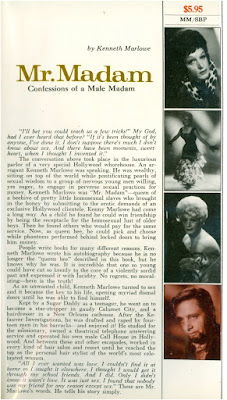 Shockingly, there is not a Wikipedia page dedicated to Mr. Marlowe, who may be the first female impersonator to market himself via print media. Well, there should be! He created a mini-empire with his how-to-books, confessionals, personal appearances, performances, beauty demonstrations and mentor services. Yes, he was a true queen's queen!

According to one of his memoirs, he was raised in a brothel which is where he learned all his beauty secrets. After establishing himself as an entertainer, he recognized that there was an unexplored market to tap; amateur, closeted, cross-dressing men who were in need of a little help. Marlowe provided it and made quite a respectable living for himself - during an era when such things were still considered 'perverse'. 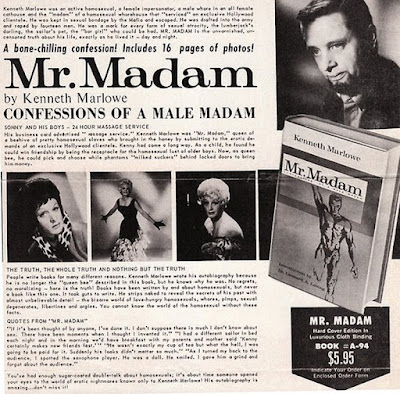 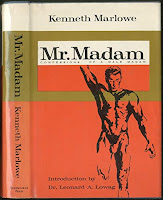 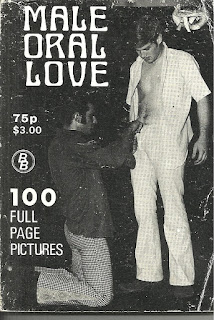 He was also the author of seven books, ranging from how-to books, memoirs, an exploration of what it means to be a homosexual and a pictorial depicting the do's and don'ts of oral sex.  My, my... something for everyone!
--- --- 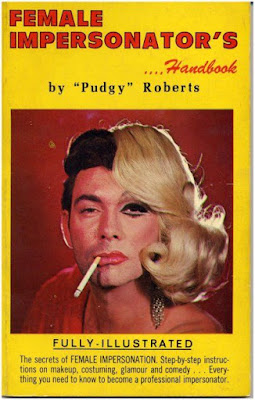 Female Impersonator's Handbook
Author: 'Pudgy' Roberts
Publisher: Capri Publishers
1967
"The secrets of Female Impersonation. Step-by-step instructions on makeup, costuming, glamour and comedy... Everything you need to know to become a professional impersonator."
Following Mr. Marlowe's footsteps, Pudgy Roberts was a female impersonator from New York City, most famous during the late 60's. To support his life in drag, he owned and operated a flyer distribution service. 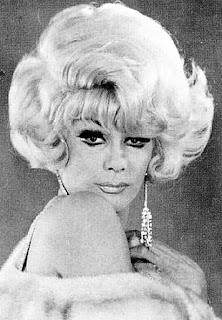 Besides the above how-to book, he also contributed two novels to the gay pulp genre: 1968's Dormitory Mates, and 1969's Seafood. Interestingly, he edited his own monthly magazine, Female Mimics which featured drag performers from coast to coast and wrote for Gay Power, New York's first gay newspaper, from 1969-70 (Robert Mapplethorpe's first published work graced the cover of a 1970 issue of Gay Power). 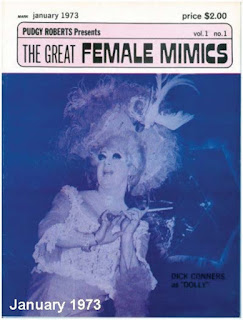 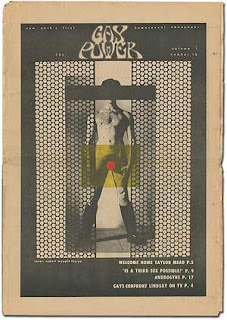 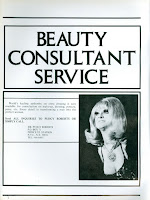 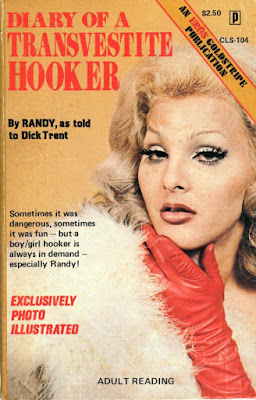 Diary Of A Transvestite Hooker
Author: 'Randy', as told to Dick Trent
Publisher: Eros Goldstripe/Connoisseur Library Series
1973
"Sometimes it was dangerous, sometimes it was fun, but a boy/girl hooker is always in demand... especially Randy!"
Described as "A telling of escapades in the life of a transvestite hooker, told in the pictorial style", Diary Of A Transvestite Hooker is credited to Dick Trent and Edward D. Wood, Jr. - yes, that Ed Wood, Jr. (Plan 9 of Outer Space, Glen or Glenda). Next week, when we take a peek at how drag was represented on the covers of gay pulp fiction, we'll be taking a look at a few of his novels. 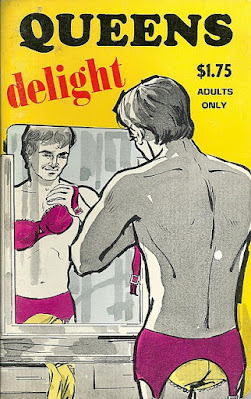 Queens Delight
Author: Pat Connors
Publisher: Lavender Publication
1970
Pat Connors only other credit is the gay pulp novel, Fire Island Frolics. I have seen Queens (or Queen's) Delight categorized as both a how-to manual and gay erotic literature, so I decided to cover my bases and include it here.
--- ---
Well, that's enough for today, class. (Pam, sit down.) Next week we'll take a look at how drag and feminine males were depicted on the covers of classic gay pulp novels. (Pam, put your skirt down, dear.) I hope you enjoyed this rather limited peek at these brave pioneers. (Pam, put that bottle of Hendricks away, unless, of course, you brought enough for everyone.)
Until next time.
Thanks for reading.
You Think You're A Man - Divine
Posted by uptonking at 6:00 AM

Ohhhh
This is fascinating! I love that Diary of a Transvestite Hooker cover! Mr. Madam was indeed multifaceted. I'm glad you pointed out that many cross-dressers are straight.
That Male Oral love booklet? yes!

These gals are quite cool & they simply slay! 🔥

It indeed was as you say...interchangeable in most minds. And that it was always - except for comedic purposes (think "Uncle Miltie," "Some Like It Hot"). Then along cam Jim Bailey. Then along came "Boylesque" in Las Vegas. Though both men were gay, the term female impersonator gained legitimate ground.

From the original, fully expected DRAG (or face imprisonment for allowing a female on stage), to thrown in prison for performing in Drag, to today: accepted more and more and more by middle America. Kisses.

Makes me wonder if any of these fellows ever did anything with the legendary Jewel Box Revue? They sure looked good enough to perform with them.