Who Did It Better? Jive Talkin' 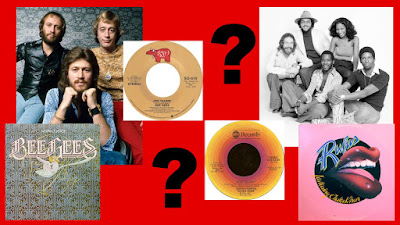 Who Did It Better?
Jive Talkin'
For today's Who Did It Better?, we head to the year 1975.
The other day, I was listening to a best of collection by Rufus and Chaka Khan, which got me  thinking about all their hits not on it, such as... their version of Jive Talkin'. That, of course made me think of The Bee Gees, which then got me to wondering how the recording and release dates lined-up for the two groups.
Well, while not competing versions by any means, timewise? Close enough. They were both recorded in 1975. It also lines up well with our recent dive into songs written by one recording artist, but made popular by a different recording artist. Of course, in this case, the songwriters beat the other recording artist to the punch, but it's still an interesting look.
Written in the studio by The Brothers Gibb and recorded on January 30th and February 2nd, Jive Talkin'  was released by The Bee Gees in May of 1975 as the lead single from their Main Course album.
The song, originally called Drive Talkin', possesses a rhythm track based on the sound the group's car made while crossing the Julia Tuttle Causeway as they traveled back and forth between Biscayne Bay to Criteria Studios in Miami. However, that title? It quickly changed.

As brother Maurice recalls, "Barry didn't notice that he's going 'J-J-J Jive Talkin' ', thinking of the dance. 'You dance with your eyes'. That's all he had. Exactly 35 mph, that's what we got. We played it for Arif, and he went 'Do you know what Jive Talkin' means?' And we said 'Well yeah, it's, ya know, you're dancing.' He says 'No! It's a black expression for bullshitting.' And we went, 'Oh, really? Jive talkin', you're telling me lies...' and we changed it." Producer Arif Mardin contributed mightily to the composition, according to Maurice, by providing "the groove, the tempo, everything."
Promotional copies of the single were sent to radios stations in a plain white wrapper, minus any identifying information. A similar approach had worked for the group back in 1967, when they had their first stateside hit, New York Mining Disaster 1941. Needless to say, lightning struck twice. Their version of the song went on to capture the #1 spot on Billboard's Hot 100 while also reaching #1 in Canada, #5 in Ireland, #5 in the UK, and #4 in New Zealand. Considered something of a comeback, Jive Talkin' was the group's first US Top Ten hit since 1971's How Can You Mend a Broken Heart.
Just as The Bee Gee's version of the song was being released to radio stations, into the studio walked Rufus with Chaka Khan to record their fourth album. Unlike their three previous albums, the group was planning on recording only one outside contribution, a recent composition by The Bee Gees, Jive Talkin'.
After putting their unique spin on the tune, the group was busy putting finishing touches on their new album Rufus featuring Chaka Khan when the Bee Gee's version hit #1 in August of 1975. Rufus and Chaka Khan's album, released on November 18, 1975, became the best-selling R&B album of the year, remaining at #1 on the R&B album chart for six consecutive weeks. It also reached #7 on the Pop album chart, spawned two Top 40 hits and three R&B Top 40 hits, the last of which was Jive Talkin'. Their version reached #35 on September 3rd of 1976.
So, a couple of trivia tidbits:
The 45 version of Jive Talkin' by Rufus and Chaka Khan is clearly stamped 1975, but was not released as a single until July of 1976.
Also the original studio version of Jive Talkin' by The Bee Gees was included on the Saturday Night Fever soundtrack because it was used during a scene which was cut from the final film. Later pressings of the soundtrack were forced to substitute a live version of the song (taken from the group's 1977 album, Here at Last... Bee Gees... Live) due to contractual distribution changes. When the soundtrack was released on CD, the original studio version was restored. And that qualifies those later issued albums with the live version of the song as collector's items.

I agree. The Bee Gees. I had no idea that Rufus and Chaka Khan had recorded it, to tell you the truth (Love Chaka! I'm Every Woman is the shit).
I had no idea that Barry had not used his falsetto all the time. I only know them from the SNF soundtrack, too, so that that's not strange. But their version is a bop.
I also didn't know what the expression meant. It's really not very current, no?

I had to compare the two. I guess when I hear the same song performed by two different artists it does spark my curiosity as to which I may enjoy better. But I was pleased with both versions. It is always hard to put two bands that you really enjoy in a competition. It’s like my friends trying to get me to choose between Michael Jackson and Prince. It’s just not going to happen. I have to say Rufus and Chaka Khan’s into was much more easier to digest than that long ass intro of The Bee Gees. And from the beginning of the drum beat going into the guitar and keyboards; that sound was evident that that was Rufus and Chaka Khan. No one has that slow sleezy funk like them. It’s a total cliche of anticipating the scene when the pizza guy with the 70s sideburns and mustache get’s jumped by the hot female customer. I could swear they were watching some bow chicka bow wow when they wrote their music. I love it.

Now The Bee Gees. Their version is the one I am most familiar with. It’s got a beat you can groove to and it’s universal. It was played on rock ‘ pop stations what were known as “White” stations and R and B stations that were know as “Black” stations. Because Rufus’s version is more funk oriented, I’m sure it wouldn’t have been received as well in the “white” stations. But honestly I don’t recall hearing Rufus’ version on the “Black” stations either. As a matter of fact until I visited your post I didn’t know it existed. I nearly pissed my pants when I saw this post! How can a music lover as myself go forty five and some change years without knowing this version existed?

Anyway I am quite pleased with both.

Nobody loves Chaka Khan more than me. I even have her Klassy Khan CD....EXCELLENT BTW....but no body does that song like the Bee Gees!!!!!!!

Chaka's is too thin... I gotta go with the Brothers Gibb.
BTW, have you seen the documentary? They cover the creation of this. Kisses!

As much as I love Chaka Khan, Bee Gees hands down. This song takes me back to the AM car radio days. People would be driving and hand jiving along to the song.