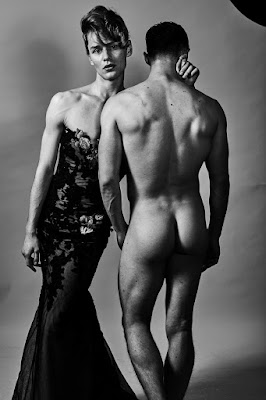 Our dear friend, Sixpence over at (LO) IMPRESCINDIBLE touched on something this week (FILLER QUEEN) that rang a bell in my head that I'd been ignoring for some time.

I remember when this whole gender blender thing got plugged in and set to liquefy. It was a generational movement and I was not part of it. As terms and labels began to flood social media, hook-up apps, and the media, I honestly had to take stock of how I felt about it.

At first I dismissed it as a fad. They'll get over it. They'll tire of it. But, very slowly it began to speak to me... their terms, my comprehension.

I mean, during the days of glam, we certainly toyed with crossing-dressing and crossing gender lines, but it was all viewed with a bit of a jaundiced eye, oddly confident that only certain ideals of men and certain ideals of women would ever be acceptable, and therefore, any deviation was tongue in cheek and never to be taken seriously.

Very well-defined parameters, for me, were set in place at an early age, during an age still under the toxic influence of the button-down, girdle tight 1950's. It's laughable, now, given how far we've come as a whole. And yet troubling how far I had still to go.

All through the 80's and 90's, I was aware, but wary - careful to leave a well-defined line, a taut rope, between myself, as I thought I presented myself to the world, and them. I couldn't remove that barrier for fear of ridicule, for fear of drawing the wrong kind of attention to myself.

Not that I ever passed as straight. Oh, gawd, no. I was always more than a little suspect. But I was careful to keep my feminine nature to myself. I allowed it to color my work in the theatre, somewhat on stage as an actor (my portrayals were often considered 'sensitive'), though it came in much handier as a director, or when coaching actors. But that sensibility remained trapped within those black boxes, never to leave the stage door for many, many years.

After I escaped, I didn't think about gender at all. At least, not in the restrictive terms imposed by the theatre. By that, I mean... if you wanted to be considered for certain roles, you had to project the attributes associated. And the more defined your style, the more likely you were to be considered for only a certain kind of role. I was never to be the male ingénue; those roles were reserved for the handsome, the virile. I was always the professor, the teacher, the fool, the hoodwinker, the sidekick, the villain. But I wouldn't have been considered for those roles had I not remained on a certain side of that rope.

I remember sitting through a painful production of Carousel, watching an actor I knew in the lead. He was blonde and handsome, and possessed wonderful posture and a truly beautiful tenor voice. Off-stage, he was gayer than gay (despite his frequent denials) and so feminine, if you put lipstick on him, you would have sworn he was a drag queen waiting to do a number. All this made him frequently testy and difficult to work with. So I didn't. I avoided him like the plague. But watching him that night, make something of a mockery of Billy Bigelow, pushed every fear button I had about my own masculinity as others perceived it.

And so, as long as I remained an actor, I knew I had to remain on a certain side of that rope. And I did, until one, fateful callback. I was up for one of the leads in A Funny Thing Happened on the Way to the Forum. The director had made no bones about who was to play Pseudolus, a tech director buddy of mine who'd once kindly subbed for me in The Inspector General while I was busy tackling George in Who's Afraid of Virginia Woolf?

At the cold audition, we had chemistry. I knew it, he felt it and the director recognized it. Typically, the part of Hysterium would have automatically been given to an actor, a favorite of the director's, who'd had the lead in every show the director had done in the past three years. But he was all wrong for Hysterium and I knew this was my shot to work more closely with this particular director.

He was good director. Created great stage business, bits cribbed from the classic movie comedies of The Marx Brothers, The Three Stooges, Laurel and Hardy and the like and he knew how to 'package' a show. But we had an on-going love/hate relationship. While he recognized my talent, he also resented it. I was younger and going places. He was stuck and a chronic alcoholic. While he always cast me in his shows, he also always found a means to punish me.

We were very jealous of each other.

And so, I came in for a callback, surprised, but hopeful. I could tell he was actually considering me for the role. And so we worked on a new scene, and in this one, my character, Hysterium is in drag, comically passing himself as the female ingénue. I and the actor playing Pseudolus worked our way through the scene a few times. I wanted to go very Danny Kaye and had some lovely bits of business.

But I overshot it.

I was too feminine.

We ran the scene three times. Each time the director would come down to the stage and wheel off a list of things I was doing wrong. I kept trying to incorporate what he wanted. I wanted to please.

Fourth time through, mid-scene, the director flew into a rage. He charged me, grabbing at me, physically manipulating my body. Yelling at me. I remember crumbling inside; everything crushed and going to powder. I was humiliated.

He cast the actor he always cast as his lead in the role. I was relegated to Marcus Lycus, keeper of the whorehouse. The show was a truly horrifying experience. During one rehearsal, the director, who was drinking heavily, asked for a rope, which he tied around me so I couldn't use my arms. Again... humiliated. But I was so brainwashed. I so wanted to belong. I so wanted to please. I so wanted for them to like me. I truly believed that there was nothing more important than being in a show and that a commitment in the theatre was to be kept all costs

It was a little one, at first. No one could see it. I didn't even notice it.

I began to act out within the character. And I can't even explain the process, suffice to say, that on opening night, my Marcus Lycus was an insane drag queen clown. I had outrageous make-up on, tons of jewelry, a giant fright wig with feathers and a witch-like cackle. I'd sold the costumer on the idea that Marcus over-identified with the courtesans he took care of, to the point that he saw himself as one of them, so my Grecian robe was basically a sparkly, brilliant orange evening gown. I even had a feather boa. Looking back, I realize that I was going to express my feminine side one way or another. I may not have been cast as Hysterium, but I sure as hell was going to do drag.

The director hated it. I'd listen to his complaints and then, do whatever the hell I wanted.

As the season wore on, I started to be afraid to leave my apartment. Part of this had to do with a woman with a butcher knife chasing me around naked, threatening to cut of my dick during this same time period. I've shared that story here before. But, it all affected me enough that I actually got fired from a show because I wouldn't come to rehearsals. It was a sad day. I packed my bags and left town in the middle of the night. No good-byes.

And I never went back.

After that, I continued to act, but I enjoyed it less. I started concentrating on coaching and directing. I wanted to be 'a women's director'. I did all sorts of female-centered shows. I had the kind of sensibilities necessary, and I achieved a certain amount of success.

And all the while, I was inching closer and closer toward the closet door.

When I started writing this post, I had no intention of telling this story. I was simply going to talk about how I evolved, finally, and let go of all those so-called gender 'norms'. Then exclaim how wonderful and freeing it all is. Rah-rah. Yay, team.

Instead, Alice fell down the rabbit hole.

Those who live an examined life, look in the mirror, and slowly peel back a layer of skin. They do so to identify what lies beneath. They then correlate what they find to the face they present to the world, the face they share with the world.

As we age, we place layer upon layer upon layer, covering up moments, thoughts, incidents, feelings, where they lie unexamined, until we peel back enough layers to rediscover them... sometimes by accident.

Be good to yourselves.

Cracked Actor - David Bowie
Posted by uptonking at 6:00 AM

you will share the face with which you are most comfortable, dear.

Things are slowly but surely changing in the world. 👏🏻 And yes, for the better. As you know, it's much better today than a decade ago, or two, or more. 🤷‍♂️

I love gender bending. Many, many (many), years ago the partner at the time and I enjoyed "dressing up" for Halloween. We loved shopping for outfits. But not the usual transformation kind of drag. We kept our beards, used no makeup, and wore our sensible men's sneakers. Skag Drag.

I look absolutely normal and I don't dress up, but I certainly don't blame anyone who does. As for my nature and my thoughts, my whole person, not just my sexual one, my point of view is that I no longer run after people trying to satisfy them. Better alone. I no longer have neither energy nor time to waste for those who don't deserve it.

Oh, Upton.
This post was... incredible?
We never know what motivations people have for their attitudes until we know them. I can't believe that post I wrote would produce something like this. I love your introspection. It's helped me understand why so many gay actors stay in the closet or do not take 'gay' roles.
You've lived a fascinating life.