Who Did It Better? Isn't She Lovely 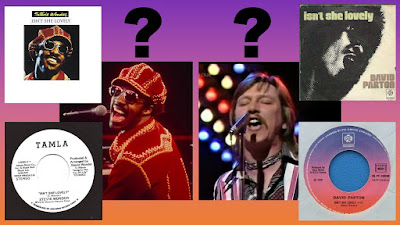 Who Did It Better?
Isn't She Lovely
Once again, we will continue to take a look at songs written by one recording artist, but made popular by a different recording artist.
This is a fun one that will have us jumping back and forth across the pond. And, really, this story is primarily about the British charts. Here in the U.S. of A.? If asked who David Parton is, we'd assume he was one of Dolly's brothers. Stevie Wonder, on the other hand? An American treasure.

However, in England, David Parton is considered a true one-hit wonder - a hit that a couple of circumstances conspired to make happen.

David Parton is an English singer-songwriter/music producer from Newcastle Under Lyme, Staffordshire, England. He is also known as Des Parton and Cyril Dagworth.

Parton began his career as the lead singer for a band called Strange Fox. The band was taken under the wing of Tony Hatch (David Bowie, Petula Clark, Sweet Sensations, et. al) in the early 1970's. Parton wrote a pair of songs for a British band called Sweet Sensation. One of them, Sad Sweet Dreamer, went to #1 in the UK. He also arranged and co-produced the track with Tony Hatch and Jackie Trent.

For me no contest: Stevie, always.

OMG I have Songs in the Key of Life! It's a great record.
As for the song, in my mind it's Stevie. He can almost do no bad (I just called...) and the song is such an inescapable staple that you can't help but go for it.
Parton's version sounds muffled to me. Like you say, less crisp. Stevie is genius.

I will say this, very few people dare to cover a Stevie Wonder song. Parson did a good job.

With this song, it would almost be sacrilegious to not pick Stevie Wonder. His version has always been such a feel good.

Too long for radio play. Hah! Well, Queen put that issue to rest, didn't they? And did nit damn well, I might add. I have to agree, this is Wonder's all the way. Kisses.