Who Did It Better? Jesse 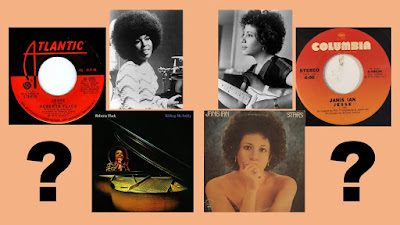 Who Did It Better?
Jesse
Today, we will continue to take a look at songs written by one recording artist, but made popular by a different recording artist.
In 1973, Janis Ian was an artist adrift without a record label. To say she'd peaked early would be an understatement; at the ripe old age of 15, she'd had a major hit with Society's Child, a song that dealt with an interracial relationship. The song seemed destined to expire uncelebrated, except it caught the ear of  Leonard Bernstein, who featured Ian on one of his television specials. The song set off bells and alarms, and quickly began to climb the charts. The public reaction? Divided to say the least. One radio station was actually burned to the ground for playing it. Ian became a cause célèbre, making numerous television appearances.
Until the day... she wasn't.
Her follow-up albums failed to catch fire. She was dropped by Verve and picked-up by Capitol, who issued a single, under-promoted album before saying good-bye.
Ian, who had given away most of her money to causes and friends, chose to concentrate on her songwriting.
And it paid off.
Jesse, a song Ian had been working on for some time, was chosen by Roberta Flack and producer Joel Dorn for Flack's 18 months in-the-making, Killing Me Softly album. The song was track two and chosen as the second single.
In Ian's own words:
"I was 14 or 15 when I started (writing) that song, Originally, Jesse was going to be about a Vietnam War vet coming home. But then that was limiting." And, given that she would later in life, come out as a lesbian, Ian clarified the intended gender of the song's subject, adding, "Jesse was always male. Jesse with an 'e' has traditionally been male. It's the 'ie' Jessies that are female."
Flack's album, Killing Me Softly, was finally released on August 1, 1973, with Jesse being released as a single on November 8th of that same year. It would reach #30 on Billboard's Hot 100, #19 R&B, and #3 A/C.
All this renewed attention got Ian a record deal. Signed to Columbia Records, she went into the studio in the summer of 1973 with producer Brooks Arthur (Carole Bayer-Sager, Bernadette Peters, Peter Allen) to record Stars, an album released in February of 1974.  Stars contained Ian's own version of Jesse, which would be released as the B-side of her single, The Man You Are In Me (Billboard #104, A/C #33).
On January 15th, 2020, Ann Powers of NPR featured the song on the stations' One Hit Wonders/Second-Best Songs segment.

Joan Baez
This version can be found on Baez's truly amazing Diamond's and Rust album. She double times the song before reverting back to an almost leaden 3/4. It's an interesting gamble. To my ears? It doesn't pay off. It's a shame. I hear her voice and had she done the song as a steady waltz, I think I would have liked her version best. The simplicity of the guitar works, as does her voice; this song suits it well. The keyboard is a bit overworked (sounds like Music Box Dancer). The double-timing rushes everything... lending a sense of urgency not warranted. Her instrumental break is my least favorite of the three and, surprisingly, she lets it play her out. I get that she felt the need to differentiate herself from Janis Ian's take on the song - the two used to get mixed up quite frequently. Hmmm. Not a fan of this version. Diamond and Rust, on the other hand, is a great album.
Thanks for reading!
Posted by uptonking at 6:00 AM

I would also go with Ian's version. I have not listened to a lot of her records, TBH. Roberta Flack's version (the album, not the live one) is not as impactful to me. This is the first time I hear the song, BTW, so it's pretty much gut feeling and nothing else.
I loved Shirley Bassey, of course. I did not even listen to Joan Baez' version. There's something about her that I just cannot take. Am I wrong?

Love Ian - but, I'm still giving this one to Flack. It's the tone of the voice that grabs me. It's a beautiful song. Didn't even know that Bassey and Baez covered it.

I couldn't decide after you had to feature Dame Shirley! That is the only woman who can sing certain show and get me teary eyed because she sings it so meaningful...except of Billie Holiday.

I was never a huge Roberta Flack fan, so I would go with you on Ian.