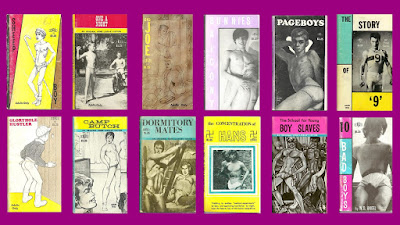 Acquired Tastes XLIII
Gay Pulp Fiction, Part 46
101 Enterprises, Part 2 of 4
Information regarding some publishers of classic gay pulp fiction is hard to come by. Given the censorship laws at the time and the subject material, many such publishers knew better than to leave much of a paper trail. 101 Enterprises is one such publisher.
Here's the little that is known about them:

101 Enterprises operated out of New York from 1967-69. During that time they published 48 books and I managed to find covers for all of them.

These books were not bound; they did not have a spine. Rather, they had a graphic wrap (a cover) and were held together with centered staples.

The artwork varied greatly, and included crude drawings, and 'borrowed' images and illustrations.

All the authors wrote under pseudonyms in order to avoid prosecution. Many of the pseudonyms were one-offs and untraceable.

At a later date, we'll be taking a look at the first chapter of one the titles published by this imprint. I've also read one book published by 101 Enterprises, and I'll be writing a review on that book for a future post.
--- --- 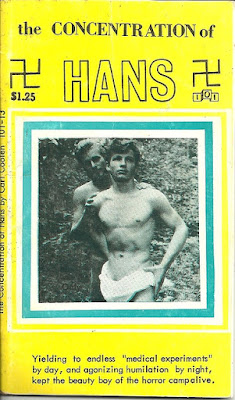 The Concentration of Hans
Author Carl Coolen
101-13
Yielding to endless 'medical experiments' by day, and agonizing humiliation by night, kept the beauty boy of the horror camp alive.
Oh. Dear. (Burying head in hands.)
Here's a recap by 120 Days Books founder and editor, Maitland McDonagh:
"Hans’ blonde, blue-eyed youth, of course, smacks of pedophiliac allure, but overall The Concentration of Hans strikes an appropriately appalled tone as it recounts his ordeal. Which isn't to say it's not one hot potato of a gay smut novel, reveling as it does in the teenager’s relentless torture and sexual humiliation.
Orphaned as an adolescent, Hans found refuge with brutish Dutch farmer Oskar, who taught him to pleasure other men and keep his needs and desires to himself. But when Oskar tried to rape him, Hans resisted and was caught midflight by Nazi invaders. Hans and fellow hot young thing Pieter are bought at a humiliating slave auction by decadent Lieutenant Haas, who gets off on pitting the boys against one another. The prize is never specified and “winner” Pieter gets nothing more than the privilege of being Haas’ girl for the night and a bullet in the head in the morning. Hans is soon shipped to Bergen Belsen, where he falls in love with swarthy, equally well-endowed Yugoslavian youth Joseph: Each gives the other a reason to endure the hunger, pain and mortification of their daily torment. Hans is flogged and raped, sucks and fucks uniformed men of all ages and watches the guards sic sex-crazed dogs on boys just like him. The nadir comes when he’s chosen for a potency experiment and, under the influence of libido-enhancing drugs, viciously rapes four boys as helpless and brutalized as himself. And “then the bombers came.”
The Concentration of Hans ends with Josef and Hans strolling on a Riviera beach, both still startlingly young and comely in their abbreviated swimsuits. Hans has reinvented himself as one Henri Maleaux (which, for what it’s worth, means “bad waters”) and is on the verge of achieving French citizenship. Both are haunted by things they’d rather forget – things so shameful that neither wants to share them even with one of the few others who would understand - but grateful that they survived when so many others died."
Needless to say, Maitland didn't republish this one as part of her efforts to preserve classic gay pulp fiction. Although I bet she wanted to...
--- --- 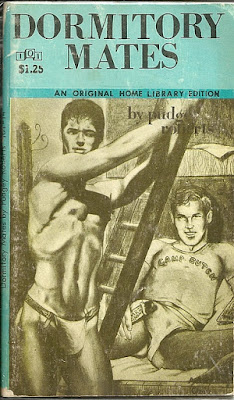 Dormitory Mates
Author: Pudgie Roberts
101-14
If you're a regular reader of my posts regarding classic gay pulp fiction, then you know all about dear Pudgie. Pudgie Roberts was a drag activist, not in the sense that Marsha P. Johnson was, but definitely broke down barriers and created new markets for drag queens, especially in terms of print media. 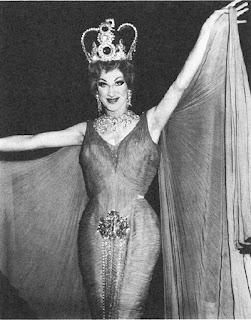 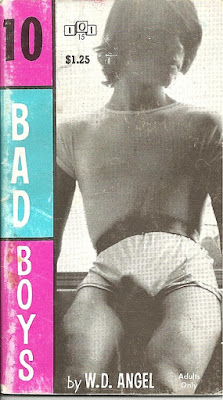 Bad Boys
Author: W. D. Angel
101-15
Well, this little underwear model certainly makes quite the impression. A tad young for my personal tastes, but not 101 Enterprises. Don't worry, boys... I have the Eek Police on speed dial. 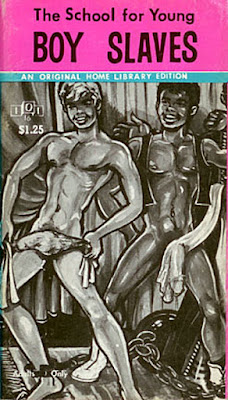 The School for Young Boy Slaves
Author: Carl Coolen
101-16
Huh. What do you suppose the editor at 101 Enterprises told Carl Coolen? "Carl? Write the most offensive stuff you can think of. Nazis, slavery, and keep it young... Sexualize things that should never be sexualized. Should sell big!" Well. At least they're smiling. 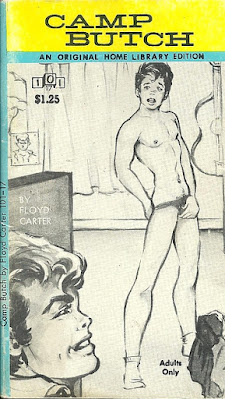 Camp Butch
Author: Floyd Carter
101-7
Dammit. I knew my mother was sending me to the wrong fucking camp each summer. I bet their whittling workshop involved a completely different kind of 'wood'. Sigh. I wonder if there was a merit badge you could earn for douching? Life skills, that's what it's all about. Cute cover. I don't know why... but I rather enjoy that distressed look on Beaver Cleaver, there. 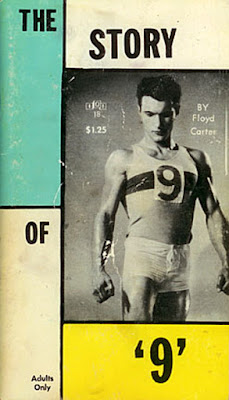 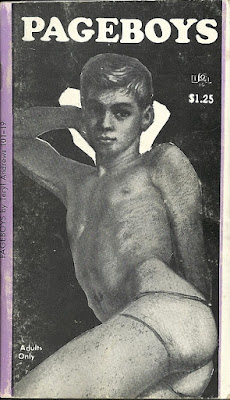 Pageboys
Author: Teryl Andrews
101-19
Our good friend Teryl, otherwise known as television writer Thom Racina. We learned all about his relationship with Brad Pitt last week. (No, it's not what you think.) Hit that link to see his other works. This one? That child is up way past his bedtime...
--- --- 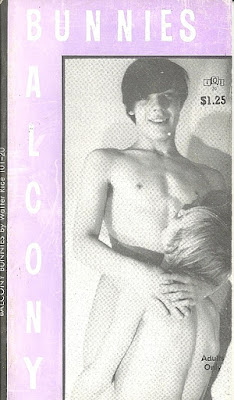 Balcony Bunnies
Author: Walter Rice
101-20
I must confess, when looking for this one I thought the title was Baloney Bunnies. I have no idea why I thought they would equate sex with America's favorite lunchmeat, but I did spend some time wrapping my little warped mind around it. Yeah, if I were you? I wouldn't think about it too hard. Balcony Bunnies, on the other hand... that I get. I visited a porn palace in St. Louis, MO. The gay films were shown in the balcony. Which is where you would think I would have spent most of my time, but... no. The back stairway proved to be much more productive. No ' balcony bunny', I.
--- --- 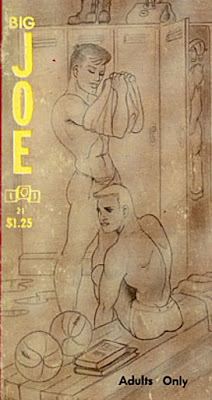 Big Joe
Author: Floyd Carter
101-21
All these covers strike me as a bit off, but this one is truly puzzling. The drawing, or tracing is actually very good, but why the weird smoky brown haze? Like it was done on some ancient parchment. That said, locker rooms are the stuff of my dreams and these two look age appropriate enough for me to get into this one.
--- -- 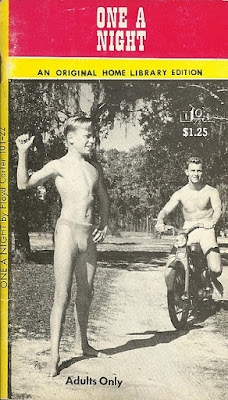 One A Night
Author: Floyd Carter
101-22
That pictorial storyline must be a scream. Check out the jailbait hitchhiking a ride wearing nothing but a jock. This looks like a 'very special' episode of Leave It To Beaver.  Perhaps a spin-off that never quite got spun? Is that one of Wally's friend's on the motorbike? PS. One A Night? That used to be my mantra! 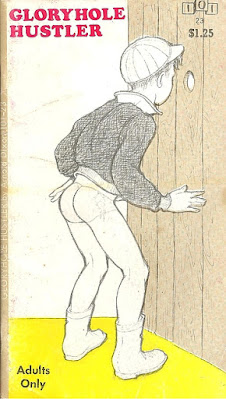 Gloryhole Hustler
Author: Arnold Dixon
101-23
This is a very nice piece of artwork, so I assume it is 'borrowed'. Now... either all the dudes on the other side of that gloryhole are giants, or that is a very small child is about to get the surprise of his life. Call the Eek Police! 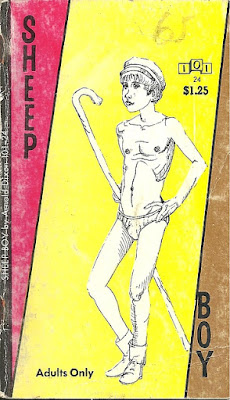 Sheep Boy
Author: Arnold Dixon
101-24
Oh, this is the same artist that gave us the cover for Young Tim - the chain-smoking, training pants-wearing young man who answers the door holding a teddy bear. I must say, the creep factor certainly carried over well. Eek Police? On their way.
--- ---
Well, folks we are exactly halfway through this imprint. Twenty-four more covers to go.
Leave your thoughts in the comments section. I love to hear from you.
Thanks for reading.
Bad Boy - Miami Sound Machine
Posted by uptonking at 6:00 AM

Yikes! It would appear the majority of the novels were about underage guys. No wonder they were cautious.

I loved the Miami Sound Machine.MSM, Hootie And The Blowfish, and KC And The Sunshine Band, are my home state groups that made it big.

Ohhh Miami Sound Machine! Yes.
Now, those boys in the covers... really. Whoa.
The only covers I like is The Story of 9 and Dormitory Mates. And they did print that one with the swastika, huh?