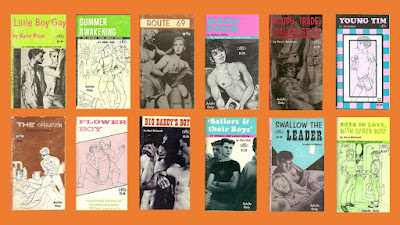 Acquired Tastes XLIII
Gay Pulp Fiction, Part 45
101 Enterprises, Part 1 of 4
Information regarding publishers of classic gay pulp fiction is hard to come by. Given the censorship laws at the time and the subject material, let's just say that many such publishers knew better than to leave much of a paper trail. 101 Enterprises is one such publisher.
Here's the little that is known about them:
101 Enterprises operated out of New York from 1967-69. During that time they published 48 books and I managed to find covers for all of  them.
These books were not bound; they did not have a spine. Rather, they had a graphic wrap (a cover) and were held together with centered staples.
The artwork varied greatly, and included crude drawings, and 'borrowed' images and illustrations.
All the authors wrote under pseudonyms in order to avoid prosecution. Many of the pseudonyms were one-offs and untraceable.

And, according to Somewhere Books:
"The writing is pretty atrocious. But no one was buying books like this for the writing; they were intended to be titillating and to be read one time. Given the stigma of owning books like this, it’s shocking that any of them still exist! One final note: the cover price is $1.25; for perspective, minimum hourly wage in 1968 was $1.00 in some states, and a gallon of gas cost 34 cents. Most paperback books were priced under a dollar and hardcovers were priced under $5.00. Apparently, there was a bit of a premium on hard-to-find (gay) erotica, however cheaply published and poorly written."

At a later date, we'll be taking a look at the first chapter of one the titles published by this imprint. I've also actually read one book published by 101 Enterprises, and, yes, it's true: the writing is unintentionally hilarious. I'll be writing a review on that book for a future post. 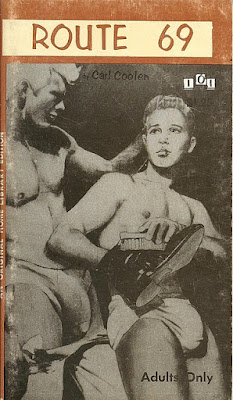 Route 69
Author: Carl Coolen
101-1
A favorite destination of many a gay, Route 69 is everybody's favorite Homo Highway! As illustrations go, this one is very good and very atypical for 101 Enterprises. Carl Coolen, like many of the other authors listed here is an untraceable pseudonym.
--- --- 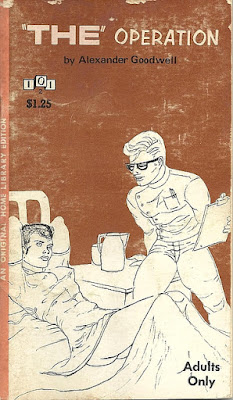 'The' Operation
Author: Alexander Goodwell
101-2
I'm not sure what is going on this cover. The patient is definitely well-defined, but his chest looks odd and the way his hospital gown falls - there's something clearly feminine being implied, even though he has a ken doll face. The doc, on the other hand appears to be oddly perched on the edge of that bedside stand. And, while his uniform fits him like a glove, his left leg appear oddly deformed. Since the word 'The' is emphasized in the title, I'll give you one guess what this is all about.
--- --- 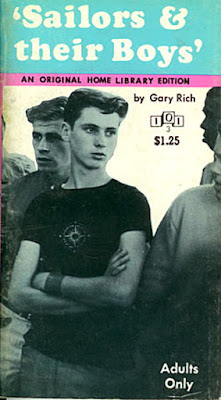 Sailors & Their Boys
Author: Gary Rich
101-3
Hmm. I don't see sailors, just 'boys'. Something tells me the young man featured prominently on the cover of this one possibly lived his entire life without ever realizing he was a gay pulp fiction cover boy.
--- --- 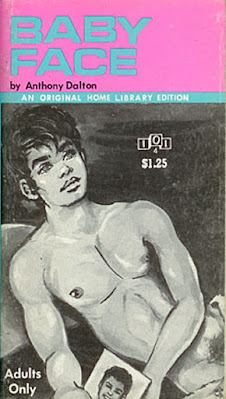 Baby Face
Author: Anthony Dalton
101-4
This illustrator is responsible for a few other covers for 101 Enterprises. Dreamy and suggestive, but not very well executed. As for the title... it would seem that incest and love of the very young are topics 101 Enterprises was rather enamored with. Or? Were they merely filling a niche in the market? Giving the people what they want?
--- --- 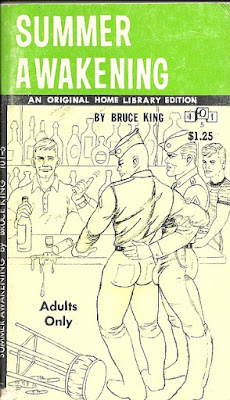 Summer Awakening
Author: Bruce King
101-5
This drawing strikes me as something that Tom of Finland would have created; the anatomy, the stances, the detail. But this appears to be a tracing of a Tom Finland original. True? Thoughts? 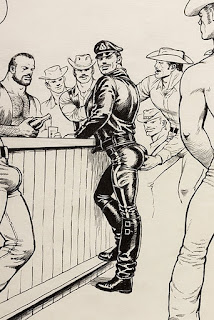 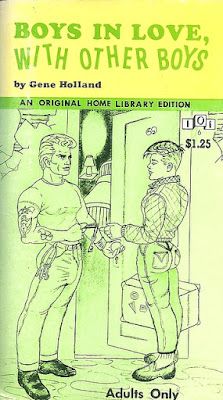 Boys In Love With Other Boys
Author: Gene Holland
101-6
This one would seem to be by the same illustrator as Summer Awakening. Check out the hair on the tenant; very five years ago, no? And that is one super Super. That man could come bang on my pipes with that big tool of his any old time of the day or night.
--- --- 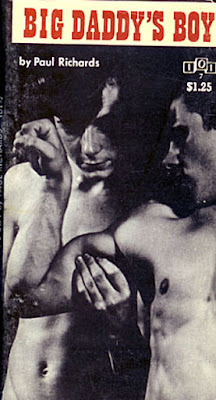 Big Daddy's Boy
Author: Paul Richards
101-7
So, how do we read that title? Is it a boy belonging to Big Daddy? Or is this a novel about a big daddy's boy, you know like a big mama's boy? Also... while 101 Enterprise occasionally shelled out for some original artwork, they more frequently lifted things from magazines and other sources. Case in point? How did they get away with it? Easy. The people taking those photos or creating those illustrations? They were dealing with the same censorship laws as 101 Enterprises. The likelihood of the artist or photographer coming forward and taking the publisher to court? Not unless they wanted to be slapped with an obscenity charge.
--- --- 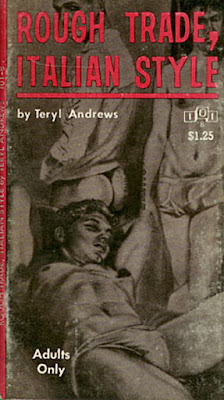 Rough Trade Italian Style
Author Teryl Andrews
101-8
Finally, a name I recognize. Teryl Andrews is none other than Thom Racina, who was/is a television writer (Days of Our Lives, General Hospital, Family) who just happened to hire a young Brad Pitt to be his personal assistant.
Racina was so impressed with young Brad, he tried to get the producers of Days of Our Lives to allow him to have a two year character arch on the show. However, everybody in charge thought Pitt was dreadful and said 'no'. On the upside? The audition got Pitt his SAG card, so Racina is really responsible for getting Pitt his start in the industry. 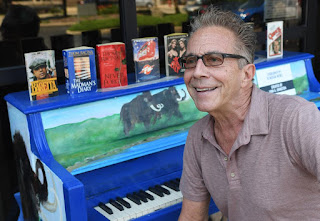 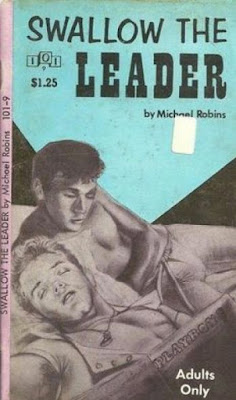 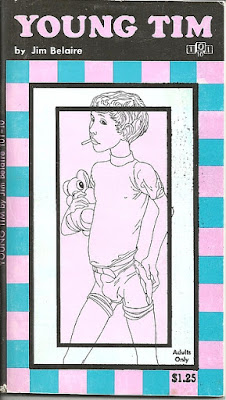 Young Tim
Author: Jim Belaire
101-10
Call the Eek Police! Man, if a dude I'm hooking up with answers the door holding a teddy bear, I am so pretending I have the wrong apartment. Also... is that a cigarette? And is he wearing training pants? Infantilism? It's a thing - a kink. Not mine. But somebody's.
--- --- 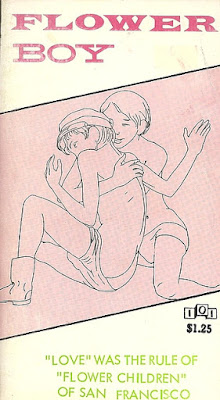 Flower Boy
Author: Teryl Andrews
101-11
"Love" was the rule of "Flower Children" of San Francisco
Another from Thom Racina. Did anybody proof read that tagline? The drawing is okay, kind of slight. It certainly does appear to put the 'children' in 'Flower Children'. Eek Police time?
--- --- 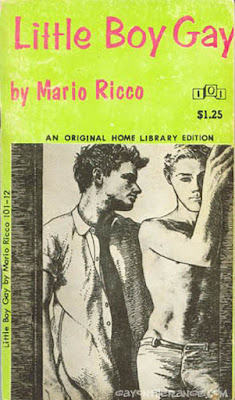 Little Boy Gay
Author: Mario Ricco
101-12
This was also published under the title $2 Trick for Homosexual Classics imprint.
Huh... are you sensing a theme here with 101 Enterprises offerings? Awk-ward.

--- ---
That's it for today. Next Monday we'll take a look at a dozen more Enterprise 101 titles.
In the meantime, leave your thoughts in the comments section. You know how I love hearing from you.
Thanks for reading.
Route 66 - Depeche Mode
Posted by uptonking at 6:00 AM

I love the title names of these books. We use to love to rush to the docks and bridges when 'Fleet Week' came to Ft. Lauderdale. The sailors would all be lined up dressed in whites on deck. Even the submarines! We called them seaweed.lol

Sheesh...I can see why they'd fear arrest and prosecution considering some of those titles and cover depictions. Yikes.

Yep, looks like a Tom of Finland trace job to me.

Yes!
I have a mix of that song. Love Depeche Mode. The boy in Sailors and their Boys looks like Dave Gaham, btw.
And I loved that first book cover. I cannot imagine what people had to do in those days to get their hands on some gay smut. They were NOT cheap!