Who Did It Better? Just An Old Fashioned Love Song 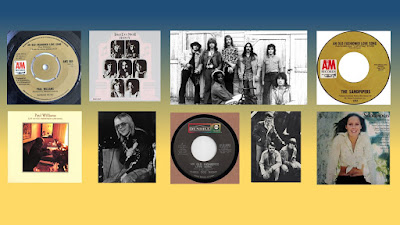 Three Dog Night wins this one - hands down.
I've always liked Williams as a writer. But also thought he never should've tried singing. Mush-mouth was the least of it for me. Even studio gadgets couldn't make his vocals sound better.

I haven't heard this song in forever. And I agree, that Three Dog Night was the best version.

Paul Williams had such a tragic life going to the highest of fame and fortune to total ruin in a short time from booze and cocaine. I remember a fight he had on the Carson Show when a guest referred to him as "Little Man".
Three Dog Night's version was first to be played and that is my #1 choice. Those guys were so musical. #2 is Paul Williams. But I love how it was half spoken and sung. Very common for the era.

Paul Williams certainly has a voice that is not everybody's cup of tea - so to speak. But as a song writer he has had amazing success from MOR Carpenters to the great late David Bowie and everybody in between.

He did have a limited acting career playing an ape in one of the Planet of the Ape movies [even appearing on The Tonight Show in full costume to the bemusement of Johnny Carson] to the cult classic Phantom of the Paradise. And who could forget his turn as Little Enos in the Smokey and the Bandit movies. LOL

OMG that was Paul Williams? I think I saw him in the Phantom of the Paradise!
And I like the Paul Williams music (to me, that sounds very seventies) but the voice of Negron is fantastic. Three Dog Night it is.

I hate this song no matter who sings it! That being said, Three Dog Night's version is the best of the bunch. I could be prejudiced since I love the band. Also, I couldn't get through Paul William's version. Mush mouth or not, my two little dogs started barking when he started to sing. And not in a good way. Had to turn it off to get a little peace around here.

Williams actually started out as an actor in 1965 The Loved One and 1966 The Chase. When that option dried up he turned to song writing. His wiki entry lists a pretty impressive career as an actor or voice actor in cartoons - mostly notable the Penguin in an animated Batman and Superman series. Not to mention all the movies he wrote the soundtracks for.

The 2011 doc Paul Williams Still Alive is informative for a man who never stops performing.