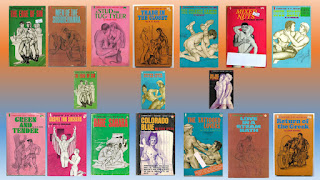 All GX titles have a mask of Zorro icon in the upper right. It's in reference to their distribution company.  The covers featured erotic black ink/pencil drawings on solid color backgrounds. This is true of all their various imprints.
Today, we are looking at Spartan Classics, which had a brief run from 1971 to 1973, publishing 21 titles in all - all dealing with gay male subject matter. In the left hand corner you will notice a tiny Spartan soldier icon, similar to the Trojan helmet icon on all the books under their Trojan imprint.
As per usual, authors used pseudonyms in order to escape prosecution.
I did my best to track down as many covers as I could. There are three catalog numbers I was able to identify, but could not find covers for, and there was one I could not identify. They are presented in order of publication, based on their sequential numbers. 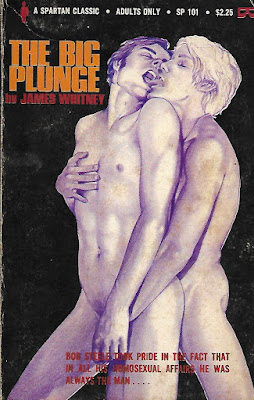 The Big Plunge
Author: James Whitney
SP 101
"Bob Steele took pride in the fact that in all his homosexual affairs, he was always the man..."
Implying that when he was with women, he was not 'the man?' Well then what was he? A eunuch?
Silly, Bob Steele. As Iliza Shlesinger says, any man who claims to be an Alpha? He's a beta.
And everybody knows that the bigger man is the one taking a dick up his azz!
So, Bob Steele? Eat me. 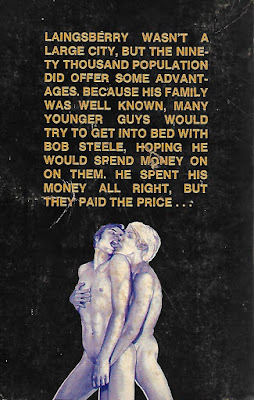 "Laingsberry wasn't a large city, but the ninety thousand population did offer some advantages. Because his family was well-known, many younger guys would try to get into bed with Bob Steele, hoping he would spend money on them. He spent his money all right, but they paid the price..."
They paid the price alright... they had to spend time with Bob Steele.
--- --- 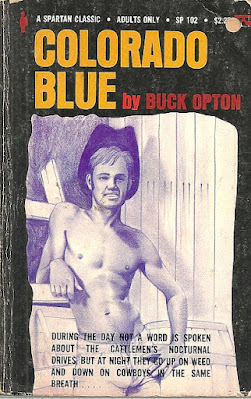 Colorado Blue
Author: Buck Opton
SP 102
"During the day not a word is spoken about the cattlemen's nocturnal drives, but at night they go up on weed and down on cowboys in the same breath."
I wasn't aware cowpokes smoked weed! News to me.
Now, let's talk about this drawing. Most of the artwork for these covers? Pretty good. A notch above what GX Inc. was putting on the covers of their Trojan titles. But this? Well, it's not that the actual drawing isn't done well, it's just... it's his face.
That cowpoke does not make me want to get poked.
--- --- 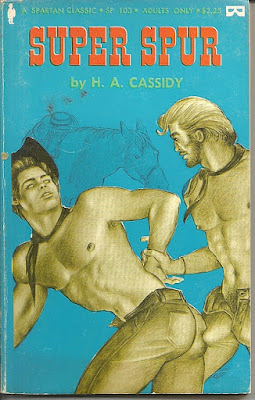 Super Spur
Author: H.A. Cassidy
SP 103
Ummm... that dude wouldn't have to twist my arm in order to get me to pay attention to that bulge riding the butt-crack of my dungarees. They're both hot. And well-drawn. 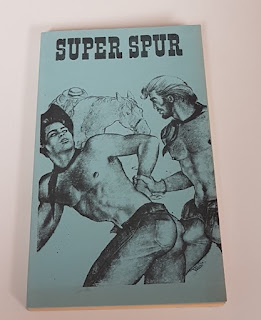 A Knock-Off Version
Hard to believe there were knock-off versions of these novels, but, yes. And what was to stop them? Due to censorship laws at the time, it's not as if the publishing company was in a position to take anyone to court to stop them. That would call attention themselves... something they couldn't legally afford to do, unless they wanted to face obscenity charges.
--- --- 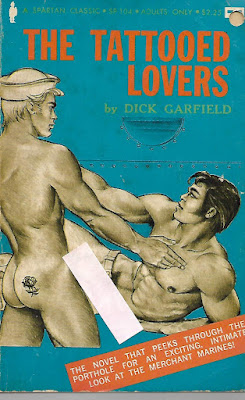 The Tattooed Lovers
Author: Dick Garfield
SP 104
"The novel that peeks through the porthole for an exciting, intimate look at the merchant marines!
I've taken many a peek through many a porthole! I would like to report that they are all pretty much the same, but the fact is... some were not as shipshape as others. Wear and tear, my dears... wear and tear. 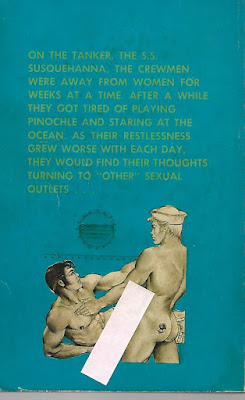 "On the tanker the S.S. Susquehanna, the crewmen were away from women for weeks at a time. After a while they got tired of playing pinochle and staring at the ocean. As their restlessness grew worse with each day, they would find their thoughts turning to 'other' sexual outlets."
Sorry about the censored covers. Apparently Amazon does not allow 'it' to all hang out, man. Again, I have to say... based on what we can see of it, this artwork is pretty top drawer.
--- --- 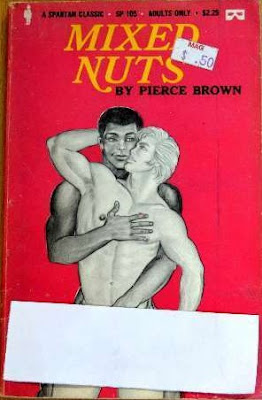 Mixed Nuts
Author: Pierce Brown
SP 105
This is not the novel that inspired Steve Martin's very odd holiday offering of the same name, featuring Madeline Khan. That was actually based on a French film.
The only thing French about this one are the kisses.
--- --- 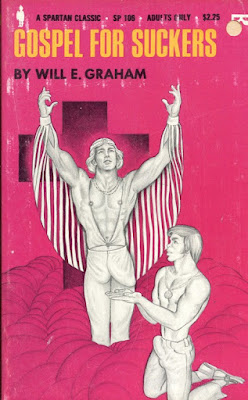 Gospel For Suckers
Author: Will E. Graham
SP 106
That's a great pseudonym. I love that the author chose to take on that pious evangelical cream puff, the Reverend Billy Graham. Graham played nice in front of the television cameras, but obviously must have been a total azzhat, based on that train wreck of son he so gave the world. Hate is a learned trait... not something you're born with.
Ummm... I would like to volunteer for some holy communion. That's quite the wafer dispenser he's got in those skintight pants. Yes, it would appear his crotch is loaded with the holy spirit.
--- --- 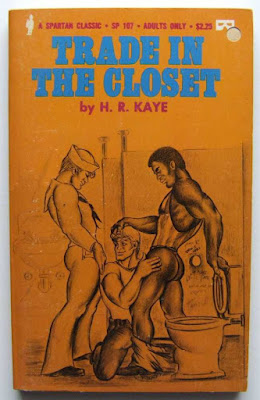 Trade In The Closet
Author: H.R. Kaye
SP 107
So, I assume this title is a play on the term 'water closet.' Also... now I know which one of these books interests me the most. This cover brings back such fond memories. Not that I ever had me a sailor in uniform... but other than that? Oh, yeah... been there, done that.
Now, you would think that that stinky open public restroom toilet would be a bit of deterrent. But let's just say... for the dude on his knees? That is not a priority or of concern. He's too busy doing the tearoom version of Sophie's Choice. A sucker can get whiplash that way.
--- --- 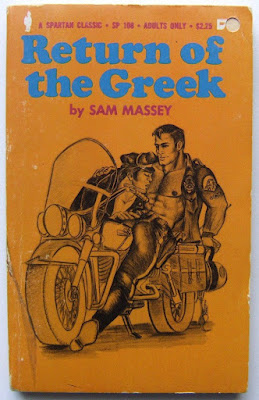 Return Of The Greek
Author: Sam Massey
SP 108
I had to look closely to be sure, but yes, that is a highway patrolman astride that bike - invoking that standard man with a badge protocol known as 'Lick it or ticket.'
That happened to me once when I was living in Iowa. Unfortunately, he got another call before we got to the 'lick it' part. But that's okay. Let's just say it was a small town and... he knew where I lived!
--- --- 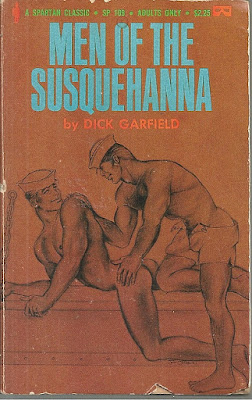 Men of the Susquehanna
Author: Dick Garfield
SP 109
This is a sequel to Garfield's The Tattooed Lovers. featuring some equally fetching artwork.
Sigh. I would love to sail those seven seas. Ride me like a wave!
That shade of brown, however? Not becoming.
--- --- 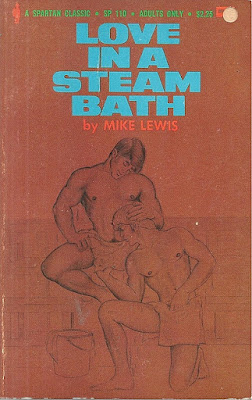 Love In A Steam Bath
Author: Mike Lewis
SP 110
Again, great artwork undone by that terrible brown.  Hard to see. Just like in a steam bath!
I love me a funky bathhouse. I know there are super nice ones... Steamworks in Chicago comes to mind.  But there's a beauty to those that are a bit decrepit. I was recently informed that Man's Country shut down some time ago. When I visited, it was well past it's glory days, but you could still feel the energy in the walls - sort of like walking through an abandoned haunted house.
--- --- 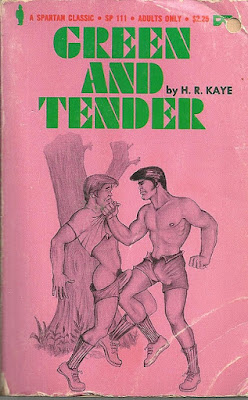 Green And Tender
Author: H.R. Kaye
SP 111
The perspective on this one is all wrong, but at least it's not brown. And that title? Is this about scouting?
--- --- 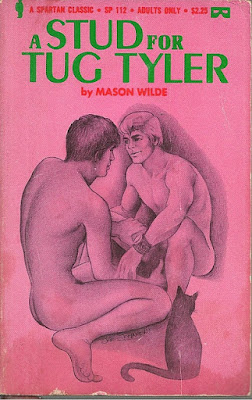 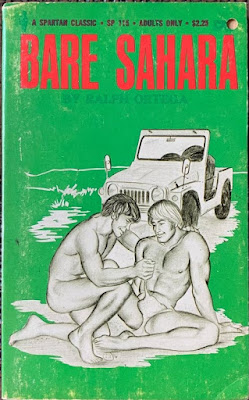 Bare Sahara
Author: Ralph Ortega
SP 115
The perspective is all wrong on that jeep, but otherwise, another nicely drawn cover. 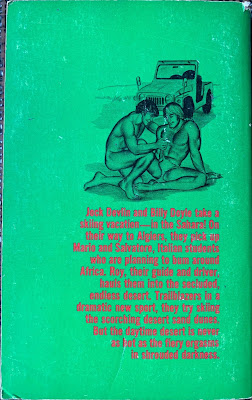 "Jack Devlin and Billy Doyle take a skiing vacation - in the Sahara! On their way to Algiers, they pick up Marlo and Salvatore, Italian students who are planning to bum around Africa. Roy, their guide and driver, hauls them into the secluded endless desert. Trailblazers in a dramatic new sport, they try skiing the scorching desert sand dunes. But the daytime desert is never as hot as the fiery orgasms in shrouded darkness. "
I can't imagine how much wax one would go through to ski on sand and, initially, when I read the back cover of this one, I thought the author was smoking some supremo weed, but nope - it's a thing.

From Wikipedia: "Sand skiing is a sport and form of skiing in which the skier rides down a sand dune on skis, using ski poles, as done with other types of skiing, which is practiced on either snow, dry ski slopes, or roller skis. It has origins mainly in Namibia, where board sport sandboarding can also be practiced."
--- --- 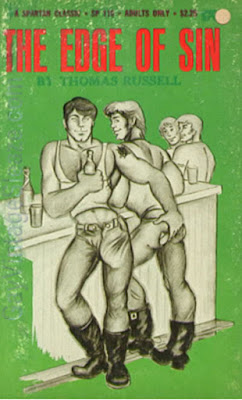 The Edge of Sin
Author: Thomas Russell
SP 116
Perfect title for a gay soap opera! Man, the dude who drew these covers sure had a thing for kielbasa.
It's been ages since I have been to a gay bar. I mean, yes, Covid prevented that for some time, but even before that - I never went. The other day someone at the prairie said that Grindr has ruined cruising. I'm not sure he's wrong.
There was a time when the art of cruising was practically an Olympic sport.
--- --- 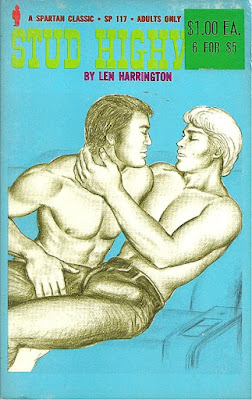 Stud Highway
Author: Len Harrington
SP 117
Another great title for a gay soap opera! And look, it's our old friend, Len Harrington. I don't believe I've written about a vintage gay pulp fiction publishing house that he didn't write for. Of course, it could be more that one writer using that name. That was a common practice in the genre.
--- --- 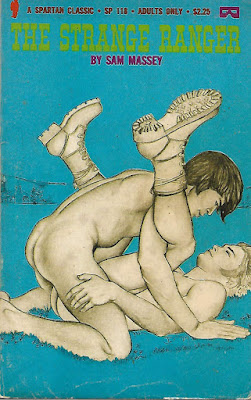 The Strange Ranger
Author: Sam Massey
SP 118
I like this cover. It's nicely drawn. But then I read the back of the book and wondered what it could possibly have to do with the story. It's about a ranger who goes to rescue a downed pilot, only to get stuck in a blizzard. So the two end up hunkering down in the cabin of the damaged plane and one thing (predatory?) leads to another. Splendor In The Grass, this is not. 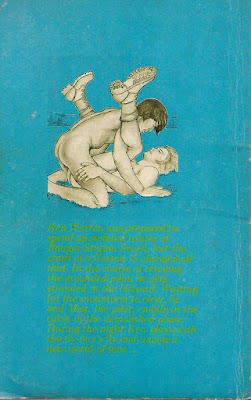 "Ken Warren was prepared to spend an isolated winter at Ranger Station Seven, but the crash of a Cessna 15 changed all that. In the course of rescuing the grounded pilot, he gets stranded in the blizzard. Waiting for the snowstorm to clear, he and Max, the pilot, cuddle in the cabin of the demolished plane. During the night, Ken plays with the flyboy's fly and unzips a new world of love..."
--- ---
The Nasty Gymnast
Author: Steve Clark
SP 119
(Cover Not Found)
--- ---
The Second Coming
Author: Dave Garrett
SP 120
(Cover Not Found)
--- ---
And that's all for today... and for Spartan Classics. We'll be exploring the other GX Inc. imprints in the near future.
Thanks for reading.
The Edge of Glory - Lady Gaga
Posted by uptonking at 6:09 AM

Was it illegal to publish gay erotica? I mean, is that why the imprints disappeared after a couple of years?

Oh the artwork definitely improved. Really liked the Strange Ranger one. Some are totally diminished by that horrible brown, I agree.
I never went to Man's Country but got awesome stories told by people who went regularly in its heyday. I would have loved to buy something from it when they tore it down. I actually walked by the site and saw they were packing the bricks to sell them. I should have bought some.