Who Did It Better? The Loco-motion 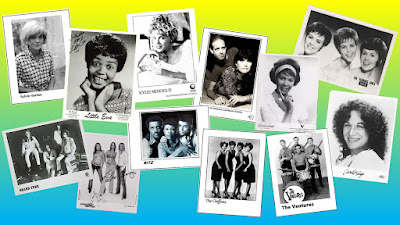 Who Did It Better?
The Loco-Motion
Today's entry is the last suggestion I have from our dear friend, Anne Marie in Philly. So, I plan on doing this one up big.

There are a dozen versions we will be taking a look at:
Little Eva
Dee Dee Sharp
The Ventures
The Chiffons
The Vernons Girls
Sylvie Vartan
Grand Funk Railroad
Ritz
Carole King
Dave Stewart and Barbara Gaskin
Kylie Minogue
Atomic Kitten
Due to the number of competitors, I will do my best to keep my comments brief (I promise.)

We have a lot to get through, so let's get started!

--- ---
The Loco-Motion is a song written by Gerry Goffin and Carole King in 1962. It would extend their long list of hit songs, which, at that time, included Will You Love Me Tomorrow, Some Kind of Wonderful, Up On The Roof, and Go Away Little Girl, to name but a few.
The song is an enduring example of the dance-song genre, with much of the lyric devoted to a description of the dance itself. However, in this case, and contrary to urban legend, the song came before the dance. The oft repeated story behind the song's origin is that King was playing the piano at home and Eva Boyd, her babysitter at the time, started dancing to it and... the dance The Loco-Motion was born!  But there's no truth to it.
The truth is, as told by King in her One to One concert video, there was no dance when the song was originally written, so once the song took off on the charts, Little Eva had to come up with something herself, which is the dance she can be seen doing in all live performances of the song.
Also true? The Loco-Motion is the second song to reach #1 in the US by two different musical acts. The first song to do so? Goffin and King's Go Away Little Girl.  The Loco-Motion is also notable for having appeared in the US Top 3 on three separate occasions.
Originally written for Dee Dee Sharp, who'd enjoyed a hit with Mashed Potato Time, the singer passed on the song. This created an opportunity for Eva Boyd, who had recorded the demo and at that time had been working as Carole King's babysitter. The two met thanks to The Cookies, a local girl group who recorded for the songwriters.
After a name change to Little Eva. the single was released on Dimension Records in two different versions; one with handclaps, one without. King would sing backup vocals on both versions.
The song quickly scaled the charts all the way to #1, becoming 1962's seventh most successful single in the US.
This prompted knock-off versions by The Chiffons (1963), The Ventures (1963), and - of all people - Dee Dee Sharp (1962) (who was probably kicking herself for not doing it when it was first offered.)
Overseas, a British girl group, The Vernons Girls recorded the song, hoping to score a hit. Their version was released in the UK the same week as Little Eva's. Fortunately for Little Eva, The Vernon Girls' version stalled at #47, while hers went all the way to #2 on the UK charts.
In 1962, a version by Sylvie Vartan was released in France. Singing in French, it was titled Le Loco-motion. Her version snagged the #1 spot in France on October 13, 1962.

In 1974, Grand Funk Railroad was busy recording their new album with Todd Rundgren on board as producer. Rundgren happened to hear guitarist Mark Farner whistling the song in the studio and decided the group should do a version of it. Initially, AM Radio was reticent to play the song due to the guitar solo. This was remedied by replacing the solo with a repeat of the bridge.
Released as a single in February of 1974, the song eventually hit #1 in the US, where it stayed for two weeks. It was also #1 in Canada, #5 in Australia, and #11 in Germany.
Ritz, a disco trio, released a version titled Locomotion in 1979. It would hit #1 in New Zealand and stay there for seven non-consecutive weeks in 1980, becoming the most successful record of the year in that country. Their version also went Top 20 in in Australia, Sweden, and Switzerland.

King would record a version of the song for her 1980 studio album Pearls, a collection of songs she'd written with her ex-husband, Goffin.

In  the UK in May of 1986, prog-rock keyboardist Dave Stewart (not the Eurythmics guitarist) and Barbara Gaskin would release a version titled The Locomotion as a single. The duo had scored a UK #1 back in 1981 with their cover of It's My Party and were hoping that lightning would strike twice. Despite a huge promo push, the single stalled, never rising higher than #70.

Locomotion - The Ritz
The Loco-Motion - Kylie Minogue
Posted by uptonking at 6:00 AM

The Ventures never had a lead vocalist - it was always guitar. They should've skipped this number.
I kind of like the intro with GFR and Ritz.
But nothing beats the original.

Oh how I miss Anne Marie. She was the most important cog in the wheel. I agree with Little Eva. I used to dance The Mash Potatoes to the song The Mashed Potatoes,(lol)sung by Dee Dee Sharp. I think she even did a song called Gravy. I don't remember the Grande Funk version. I was more into A Horse With No Name stuff. Kylie Monogue could "sing a phone book" and sound fabulous! (to quote Randy Jackson).

Little Eva all the way. I love the claps and the drums! I have to admit the first time I heard the song was by Kyle and I loved it. I didn't know it was a remake until much later.
I love how people danced in the sixties!!!

Anne Marie (my little carebear) being an original herself, probably would've went with Little Eva. I'm here to read your take on things. It's always informative without being tedious. I don't really care who does this song, since I hate it (always have) and won't listen.

I think Anne Marie would have chosen the Little Eva version, but she may done a shout out to home girl Dee Dee Sharp...just because.
Thank you for remembering my wonderful Warrior Queen. She was truly an original.

I agree with you! Although I like Kylie Minogue the a lot, since it was the version I heard first. I do think your also right about Anne Marie. She would like the Little Eva version best, and a few of the first three, although she did enjoy Kylie Minogue...and she most likely would have liked the Ritz too.