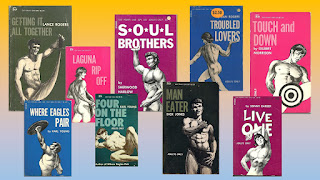 Acquired Tastes XLIII:
Gay Pulp Fiction, Part 61
Gay Way Books, Part 1 of 3
Today, we'll start to take a look at Gay Way books, which I erroneously credited as an imprint of Trojan Books' GX Incorporated of Chatsworth, CA. That said, I am not convinced they are unrelated. For one thing, they share a common distribution center, Zorro Distributing Company of San Diego, CA, as well as a similar cover art scheme - black and white pencil/ink drawings on a solid color background, changing the background color every two novels. They also, with the exception of the first four books, have a 'mask of Zorro' icon in the upper left corner on the cover.

But it gets a bit more complicated.

Gay Way began life under the umbrella of the F.S. Publishing Company as Gay Power Line. After four titles, GPL became GW, and after 12 titles in the series, the F.S. Publishing Company became XXX Inc. - both operating out of Pasadena, CA. The reason for all this cup and ball chicanery? It could be a number of things: a means of tax and/or debt evasion, or a means of avoiding prosecution; local law enforcement with the support of the feds were always working to shut these publishing houses down by any means necessary. Censorship laws during the Nixon administration were strictly enforced, the prosecution of those charged, seen as a priority. It was the beginning of the Republican Party's marriage to the fanatical Christian right.

As I researched this imprint, I discovered that many of the books were published without a date. Those that had a date, are from 1970 and 1971. I did my best to find all the covers (35 titles in all), failing five times. Utilizing the archive lists of various libraries, I was able to discover the titles, authors, and catalog numbers for all. 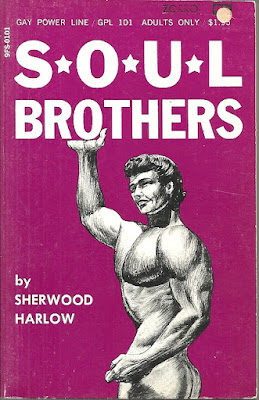 Soul Brothers
Author: Sherwood Harlow
GLP 101
An interracial love story! Exciting.
About actors. Oh, the horror!
"Hollywood Negro..." What a strange turn of phrase.
Given the imprint's name (Gay Power Line) and the topic tackled in its first offering, this could be seen as a bit of literary activism. I wonder if that's what caught the attention of the Feds, who were on the lookout for anything that screamed of extremism (which basically meant anything that didn't fit their 1950's 'perfect world' mindset.)
Funny how little things have changed. 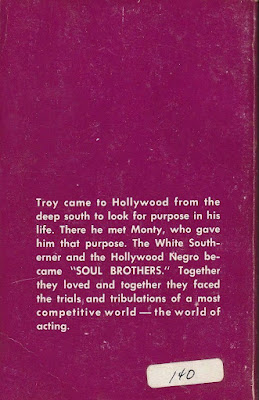 Back Cover
"Troy came to Hollywood from the deep south to look for purpose in his life. There he met Monty, who gave him that purpose. The White Southerner and the Hollywood Negro became 'Soul Brothers.' Together they loved and together they faced the trials and tribulations of a most competitive world - the world of acting."
--- --- 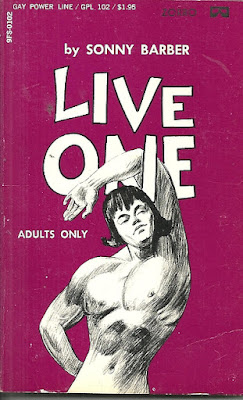 Live One
Author: Sonny Barber
GLP 102
Not the greatest drawing. And what's with the Marlo Thomas That Girl! flip?
Tell me we never-ever!
--- --- 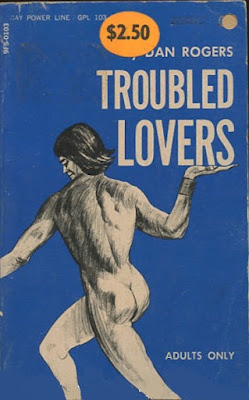 Troubled Lovers
Dan Rogers
GPL 103
I actually found a copy of this for sale for $18.50! So, I bought it. The cover and the subject matter? Not really my thing. But, I'm just getting my feet wet. Yes! I am actually buying books and starting an actual vintage gay pulp fiction collection. Super excited. I am thinking one or two per paycheck. I have a dollar limit in mind - so nothing crazy. And I've found one website I absolutely trust. More about them in a later post.
Back Cover
"Dave is seduced by Joel, a female impersonator who introduces him to the world of transvestism and encourages him to break up with his girl. Dave, a confused man who enjoys homosexual relationships, becomes deeply enmeshed." 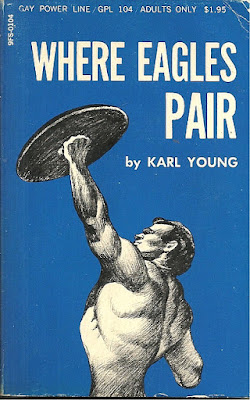 Where Eagles Pair
Author: Karl Young
GPL 104
There appears to be two artists at work here. This one is more classically trained. The other? A bit amateurish.
Karl Young would write a number of titles for this imprint.
And that does not strike me as the best way to carry a tray of cocktails.
--- ---
Turn On Turn Over
Author: Sherwood Harlow
GW 105
(Cover Not Found)
This is the switchover book - when Gay Power Line became Gay Way. It's a pity I couldn't locate this cover.
--- --- 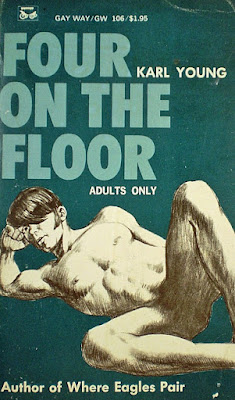 Four On The Floor
Author: Karl Young
GW 106
Karl Young's second title for the imprint.
My days of having sex on the floor are over. The idea of risking rug burns, no matter how good the sex? A deal killer.
--- --- 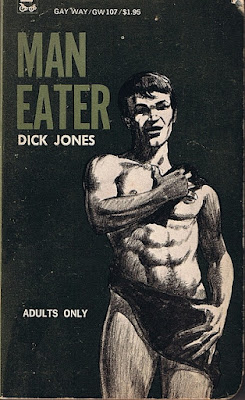 Man Eater
Author: Dick Jones
GW 107
I am going to let Maitland McDonagh from 120 Days Books do the heavy lifting on this one. Here's a bit of her review of this rather unusual tome:
"This is a bizarre tale, unusual in this kind of literature," warns the back cover, and yeah, fair enough: Though gay smut of the 1960s and ‘70s is more diverse than a neophyte might think, it rarely ventured into such outright libido-shriveling territory as genital mutilation, serial murder and cannibalism. Not without fair warning, anyway.

But 'Dick Jones' (if that's not a pseudonym I don't know what is) rushes in where tarnished angels fear to tread, and the result is a memorably nasty and psychologically astute thriller in which Vietnam veteran-turned-covert investigator Jake Gold is forced to hunt a bestial serial killer while still in the grips of post-traumatic shock syndrome. I venture to say that the vast majority of buyers who picked up Man Eater expecting a titillating one-handed read got an ugly surprise when they discovered just how literal the title was.  - Maitland McDonagh
To read the review in it's entirety click here.
This title, coupled with Paul Laurie's Night of the Sadist, has been republished by McDonagh's imprint 120 Days Books and is available as a download on Amazon.com.
--- --- 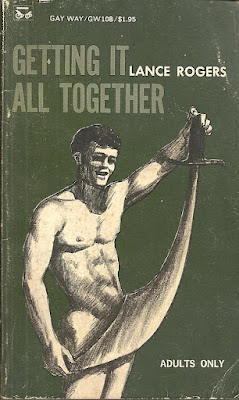 Getting It All Together
Author: Lance Rogers
GW108
It took me awhile to realize he was holding a oversized saber. I thought his toga had come undone when he removed his butt plug.
What?
Togas get stuck on butt plugs all the time.
It could happen. To someone. Probably.
--- --- 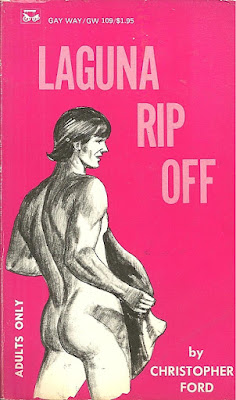 Laguna Rip Off
Author: Christopher Ford
GW 109
Rip off what? His towel?
This cover? Meh. In fact, I'm not feeling either of these artists. The covers don't seem to convey much.
And by 'much' I mean 'any fun'.
--- --- 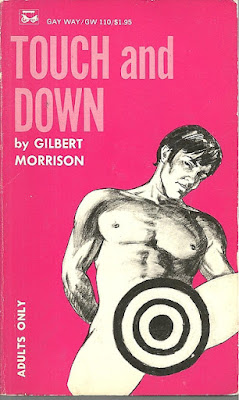 Touch and Down
Author: Gilbert Morrison
GW 110
Something tells me the artist had something different in mind for this cover. Too bad they didn't win out.
I assume this is about football players - so, I'm all in. I love me some locker room hijinks.
--- ---
And that's it for today. Next week, we'll take a look at the next dozen covers.
Until then...
Thanks for reading!
Maneater - Nelly Furtado
Posted by uptonking at 6:00 AM

I have to say that some of the drawings were not the best....

There was a complete shift in what concerns covers, no? The themes are still obviously lurid, but a little convoluted. I'm so glad you're starting a collection!
If I ever buy one of these books, I'll probably buy the ones with cool covers. After all, we all know it's not even good erotica sometimes...

Actually seems like some may be interesting reads. I’ll leave the serial killer one for someone else however. Definitely worth looking Into. Thanks!