Who Did It Better? Heart Of Mine 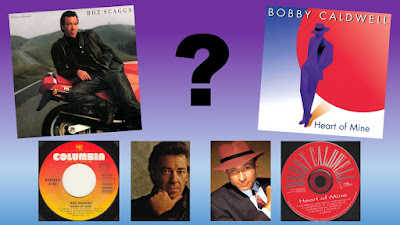 Who Did It Better?
Heart Of Mine
This is a simple story.

In 1978, Bobby Caldwell signed on at TK Records in Miami (KC & The Sunshine Band, Anita Ward, Peter Brown.) After completing work on his debut album, he handed it to the executives of the company who promptly handed it back, telling him that they didn't hear a hit single. Caldwell returned to the studio where, in two days time, he wrote and recorded his signature tune, What You Won't Do For Love. The song would prove to be incredibly influential and a timeless classic, reaching the Top Ten and providing Caldwell with a double platinum album.

TK Records target audience was the R&B crowd, who were primarily black. So they always hid the faces (Caldwell appeared as a black silhouette) of their white artists (KC & The Sunshine Band were represented by a logo, only) on the front of their album covers. So, when Caldwell, on the heels of his first success, went on tour with Natalie Cole, the audience was always a bit shocked to learn he was a white dude.

While Caldwell's follow-up album went gold, his fortunes began to dial down, as did those of his record label, TK. That's when Boz Scaggs suggested that he write songs for other artists. And Caldwell did just that - writing songs for Natalie Cole, Peter Cetera and Amy Grant, Chicago, Neil Diamond, Roberta Flack and Al Jarreau.

Heart Of Mine is a song written in 1988 by Bobby Caldwell, Jason Scheff and Dennis Matkosky

It was offered to Boz Scaggs, who was returning to the studio after an eight year hiatus. He recorded it as part of his 1988 Other Roads album.  Heart Of Mine was the lead single from the album and the only one to chart, peaking on Billboard's Hot 100 at #35, while faring much better on the Adult Contemporary chart, where it nabbed the #3 spot.

Caldwell would also record a version of Heart Of Mine as part of his 1989 album bearing the same name.

And that's the whole story.

Now? On to the competition.

The Song: Heart Of Mine

I have no idea.
They both sound good to me, but I do think the second one has more... emotion? I don't know.
BTW, that blue-eyed soul phenomena is nothing new, huh? I can imagine the surprise of people seeing a white dude show up when the voice had told them otherwise.

I couldn't get through either song. It's one of those songs that make my ears bleed. But that said I'd go with the Boz Scaggs. I did like his voice...had hints of Rick Astley for me.