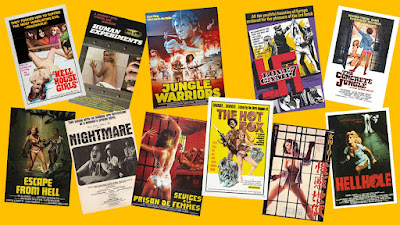 Yes, our ladies behind bars are indeed in peril, trapped in nightmares, hell holes and jungles, but nothing so treacherous that they need bother with clothing.

Their need to escape, eminent. Their safety, jeopardized Their desire to run about in panties an bras, a commercial necessity.
So, let's strip it down to the bare facts, and take a look at these scandalous, scanty-of-panties films.
--- --- 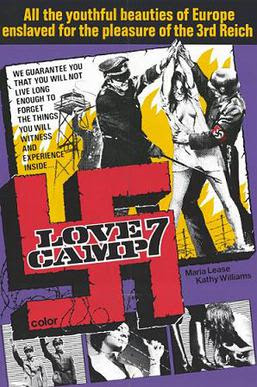 Love Camp 7
(1969)
"All the youthful beauties of Europe enslaved for the pleasure of the 3rd Reich."
"We guarantee you that you will not live long enough to forget the things you witness and experience inside."
(A Nazi prison camp holds a famous female Jewish scientist prisoner at a concentration camp, where the female inmates serve as sex slaves and are subjected to humiliating treatment, torture and rape. Two brave female Army agents, put their lives at risk, going undercover in order to infiltrate the camp and get needed information from the scientist.)
(Regarded as a cult classic, it represents the start of exploitation films about women in prison, popularized during the 1970's. It is also marks the beginning of the genre known as  Nazisploitation films.)
--- --- 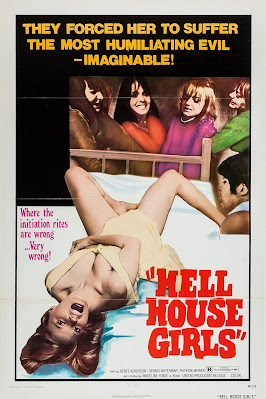 Hell House Girls
(1969)
AKA: The Smashing Bird I Used To Know/School For Unclaimed Girls
(While it contains bits of social commentary and psychological drama, the film is chiefly remembered as a sexploitation picture with lots of nudity augmented by an occasional attempted rape and bouts of lesbianism.) 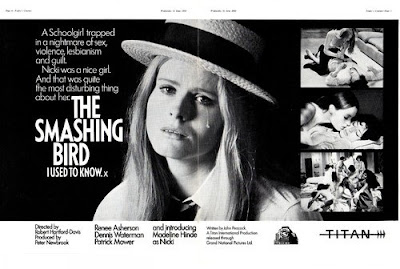 "A schoolgirl trapped in a nightmare of sex, violence, lesbianism and guilt."
"Nicki was a nice girl. And that was quite the most disturbing thing about her."
(Released in the US in 1973, it was initially retitled by American International Pictures as School for Unclaimed Girls. A year later they reissued it as as Hell House for Girls.) 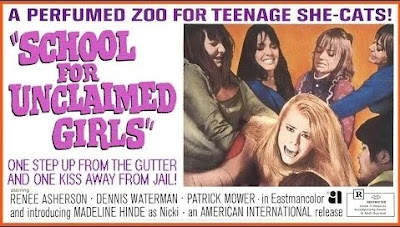 A perfumed zoo for teenage she-cats!
"One step up from the gutter and one kiss away from jail!"
(Features the screen debut of Lesley-Anne Down who was 15 years old at the time.)
--- --- 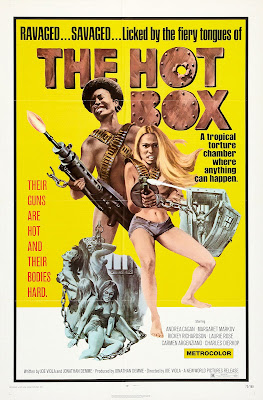 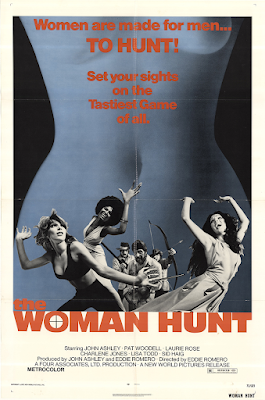 "Women are made for man... to hunt!"
"Set your sights on the tastiest game of all."
(Actress Andrea Cagan went on to become a popular ghostwriter, co-authoring and editing biographies and books for Diana Ross, Marianne Williamson, Joan Lunden, Victoria Jackson, Grace Slick. Three of her books hit the #1 slot on the New York Times Bestsellers list.)
--- --- 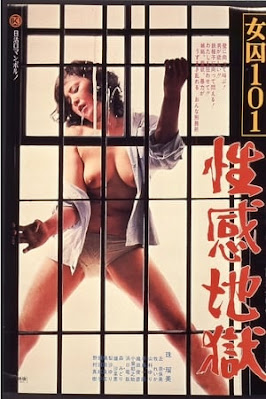 Female Prisoner 101: Hell Of Sexual Emotion
(1976)
(Explores the eccentricities and oddities of a group of female prisoners. A popular cult film in Japan.)
--- --- 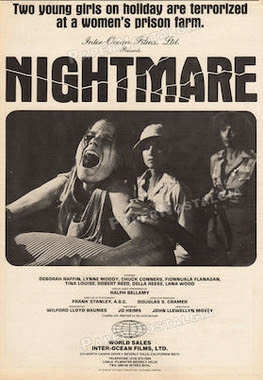 Nightmare In Badham County
(1976)
"Two young girls on holiday are terrorized at a women's prison farm."
(This is actually an American television movie which became so popular in China that actress Deborah Raffin was invited to tour the country. She went on to become a sort of Hollywood ambassador to China, helping to broker entertainment contracts between the US and China.)
--- --- 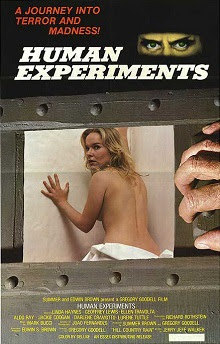 Human Experiments
(1979)
AKA: Beyond The Gate
"A journey into terror and madness!"
(Inmates at this women's prison are subjected to gruesome shock therapy experiments at the hands of a demented doctor. This features quite the cast: Geoffrey Lewis - father of Juliette Lewis - as the mad doctor, plus Ellen Travolta, Jackie Coogan, and Aldo Ray!)
--- --- 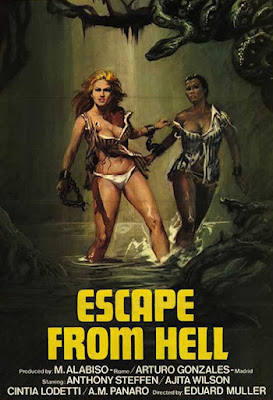 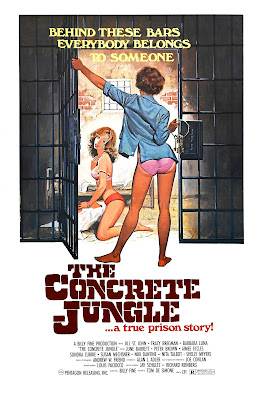 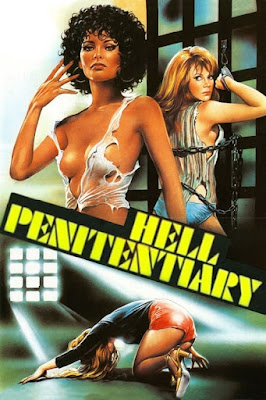 Hell Penitentiary
(1984)
(Her search for a witness to her sister's murder leads a medical student to a women's prison which she manages to infiltrate. Once inside, she begins asking questions - too many questions for the comfort of the warden and the guards. With violent inmates and corrupt official all around her, her life grows more at risk with each passing day.) 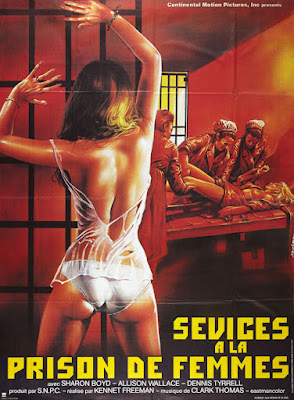 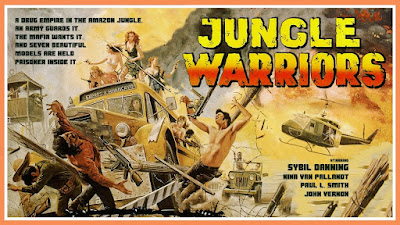 Jungle Warriors
(1984)
AKA: The Czar of Brazil
"A drug empire in the amazon jungle. An army guards it. The Mafia wants it. And seven beautiful models are held prisoner inside it."
(While scouting locations for a photo shoot, a group of models' plane is shot down in the jungles of South America. They're captured by a local drug baron's private army and kept prisoner. Then, a representative of the Mafia arrives to negotiate future business dealings with the drug baron... and all hell breaks loose.) 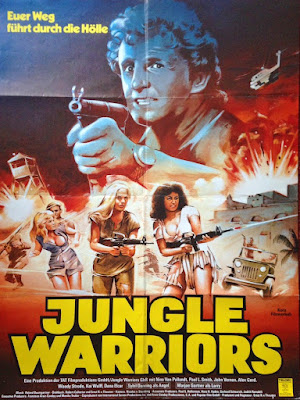 (Starring B-movie queen Sybil Danning, whose career came to an abrupt halt in 1990 when she injured her back while practicing a stunt for a film. She removed herself from the industry and stayed away until 2004, when she agreed to appear at a fan convention, where she was so overwhelmed by the public's desire that she return to acting that she did just that - appearing in a number of films and television shows before retiring again, in 2010.)
--- --- 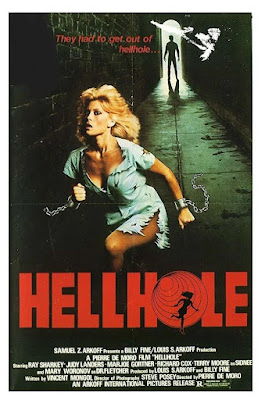 Hellhole
(1985)
"They had to get out of hellhole..."
(After being attacked by a hired killer, a young woman loses her memory. Admitted to a mental asylum, she finds herself at the mercy of a cruel female doctor who performs lobotomies on her patients. Circumstances grow even grimmer when the man who attacked her is hired as part of the staff.) 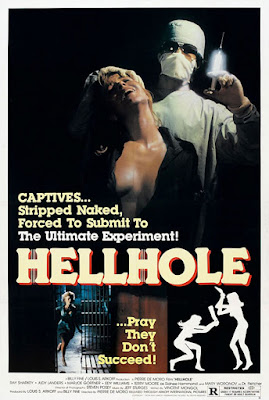 "Captives... stripped naked, forced to submit to the ultimate experiment!"
"Pray they don't succeed!"
(I must see this one. It stars one of my favorite personalities, Judy Landers. She and her sister, Audrey made quite the splash in the 1970's. It was hard to say which one was more talented. They even appeared on the cover of Playboy! The sisters remain one of my guiltiest pleasures from late 1970's to mid 1980's show biz.)
--- ---
And that's all for today!
Tune in next week.
Same time, same channel.
Hell Hole - Spinal Tap
Posted by uptonking at 6:00 AM

Holy.... The only one I recall is "The Concrete Jungle."