Who Did It Better? I Dream Of Wires 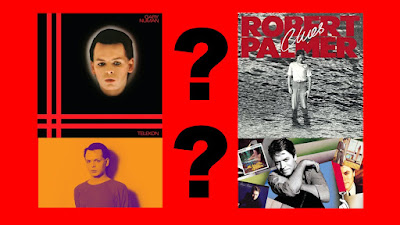 Who Did It Better?
I Dream Of Wires
A bit of a change of pace, today's Who Did It Better? selection highlights one of the more interesting collaborative relationships of 1980; that between blue-eyed soul singer Robert Palmer and, the then-red-hot synth innovator, Gary Numan.

Gary Numan was a British phenom. His futuristic, electronic musical bent captured the imaginations of young Brits as the world approached the dawn of the 1980's. He enjoyed three #1 albums and a host of successful singles during this time.
In the states, he's primarily remembered for his innovative, mechanically propulsive single, Cars (#4).
Telekon, released in September 1980, is Numan's second solo studio album. It debuted at the top of the UK Albums Chart making it his third consecutive #1 album. It was also the third and final studio release of what Numan retrospectively termed the 'machine' phase of his career, following 1979's Replicas (with The Tubeway Army) and The Pleasure Principle.
In the US, Remind Me to Smile, from the Telekon album, was released as a single with I Dream of Wires serving as its B-side.
As Numan was enjoying his runaway success, Robert Palmer was seeking new musical vistas. As part of this pursuit, he formed a brief collaborative relationship with Numan.
I Dream of Wires was covered by Palmer on his 1980's album Clues, with Numan playing keyboards and synthesizers. Numan also co-wrote the album's closing track, Found You Now, with Palmer. The pair would go on to co-write Style Kills, which would appear on Palmer's next album, 1981's Maybe It's Live.

Palmer's Clues, like Numan's Telekon, was released in September of 1980. His sixth studio album, it peaked at #59 on the Billboard 100 and #31 in the UK. It proved even more successful in Sweden, France and the Netherlands where it hit #1, #3 and #15, respectively.
And that's the whole story.
Now? On to the competition!

The Song: I Dream Of Wires
The Competitors: Numan vs. Palmer
I Dream Of Wires - Gary Numan
I Dream Of Wires - Robert Palmer
Gary Numan
Before we get down to it, a quick bit of gossip...
One wouldn't think of David Bowie as being the jealous type, but he took umbrage to Numan's runaway success in the UK. Not only did Bowie make snide swipes at the up and comer in several interviews at the time, he also wrote a poison pen song, Teenage Wildlife, which was included on his 1980 album, (also released in September) Scary Monsters (And Super Creeps.) In addition, he once got Numan - who was a big fan and was looking forward to meeting Bowie - kicked off a British talk show the pair was set to appear on, going so far as to have the object of his scorn escorted by security out of the building!
Bowie needn't have worried, though; Numan's success was relatively brief, though he, like Bowie, would retain a legion of diehard fans.
Now, back to the matter at hand.
Numan is an acquired taste. His early schtick - man as part of the machine - now comes off a bit amateurish, but, at the time, it was cutting edge stuff and he captured our collective sci-fi imaginations.
I've always been a big fan of electronic music, ever since the day I bought an 8-trak tape of Kraftwerk's masterpiece, Autobahn for 99 cents out of a bin at Woolworth's. And then there was side two of Bowie's Low album, which I got after selling magazines or something for a high school fund raiser. That album side lulled me to sleep many, many nights.
This is fun. Numan's work always possesses a cinematic quality, allowing the listener to use their imagination to fill in the void. Love the intro. Numan's vocals? Merely another piece of this electronic puzzle. Highly-treated, it's easy to dismiss him as a singer, but his sound is apt for the material, though more machine, than human. Love the trickle down synth accent.
Ah, yay. A big beat. And that odd guitar pluck. Adore. The melody? The lyrics? They serve the purpose. The army of synths are what keeps my ears glued. So much dissonance. Love that screeching synth entering at an angle.
That's the thing about electronic music: it's very easy to picture it in geometrical terms.
This is just propulsive enough to make me want to dance. It's that plucked guitar/bass line running through the whole thing (once the percussion starts.) It reminds me of Giorgio Moroder and Blondie's Heart Of Glass. Love the haunted whistling.
This runs five minutes, and I have to say, I was not looking forward to sitting still that long, but once that drum machine kicks in... I was good for the rest of the ride.
As Numan goes, this is a stellar track.
He's definitely erring on the side of being the ghost in the machine.
Robert Palmer
I suspect Palmer will be bringing more of a human element to the proceedings. His version is 30 seconds shorter, which also makes me think his will be a more focused effort. Let's see if I'm right.
I appreciate the little hi hat cymbal and the shorter intro. Palmer's vocals are over-treated and his tone is too similar to that main synth line. I'm not catching any sense of interpretation in this first verse, nor do I have any sense of, quite frankly, why he's singing this song.
Once we launch into the second verse, things are kicking. That's some very meaty guitar/bass work and I like the synth arrangement a lot. Now all I can hear is Low/Heroes-era Bowie. Palmer sounds more himself (and more interesting,) having popped up an octave. His whining howl brings an interesting texture to the piece.
The instrumental break is a lot busier than Numan's. In fact, this whole mix is much more dense and complicated... but it's also a bit claustrophobic.
Third verse we clear things out a bit. This definitely has drive.
I would be totally happy if this ended at the 3:36 mark.
I like the pulsing synth. I do not appreciate the vocal lag. If you go back to Numan's version, you'll find that Numan anticipates and is just a fraction ahead of the beat, while Palmer is doing this delay, which drags the song down.
This coda is nothing more than the first verse repeated. I'm not seeing why it's here. Perhaps Palmer was trying to demonstrate how the machine simply repeats itself after completing the task assigned?
The Verdict
Could be a tie.
It's a matter of preference.
I like the cleanliness and order of Numan's original. Yes, his vocals are mechanical and void of what is typically associated with singing, but he's man as part of the machine.
I dislike Palmer's first verse and the coda. It drags. I like his second and third verses, and his vocals on those, although it's also a bit cluttered and dense.
My pick? Numan.
But I can see a case for both.
Numan's is the purest form; the song's original intent. And I'm all about an artist supporting the song.
---- ---
And that's enough of me.
Okay, your turn. Leave your choice and thoughts in the comments section. I love to hear a differing point of view.
That's all for now.
Until next time...
Thanks for reading... and listening!
Down In The Park - Gary Numan
Posted by uptonking at 6:00 AM

As much as I love me some Robert Palmer, I too have to choose Gary Numan. I enjoyed his voice far more and the overall sound and vibe of the song. A new one for me.

For me, there's something more pleasing with Palmer's vocals.

I liked Robert Palmer - but Gary Numan was my God when I was a teenager! A hands-down winner. Jx

I love Cars! All I can see is skinny ties and mullets. Love!
I have to say I like Palmer's version better. I'm also a diehard Palmer fan. So sexy, too!