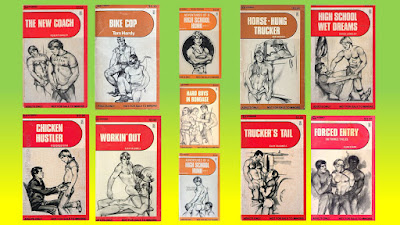 Acquired Tastes XLIII
Gay Pulp Fiction, Part 99
HIS69, Part 28 of 44
The HIS69 imprint was active from 1971 thru 1988, delivering an astounding 531 titles. Surrey House, Inc. / Surree Ltd, Inc. of San Diego and Santee, California are responsible for this imprint which was distributed by the same company as Trojan Books, Manhard Books, Gay Books and Gay Way Books; the Zorro Distribution Company, also operating out of San Diego.

The artwork for the HIS69 books would go through only two minor shifts with all the covers featuring ink drawings by various uncredited illustrators - artwork quite similar to what we saw with the Manhard imprint.
Here are the next dozen titles. This week, I came up short just once. 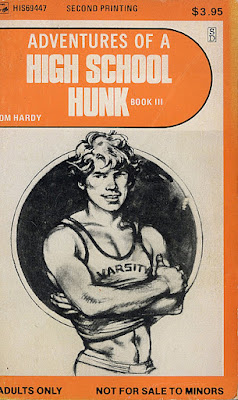 Adventures Of A High School Hunk
Book III
Author: Tom Harding
HIS69447
Third in the series, one that comes highly recommended by our friend over at Hommi Publishing. It's among his favorites and available for download as a PDF or e-book for only $2.95!
Oh, and did you notice the jump in price? When the imprint did its reboot, they raised the price to $3.95 - a dollar more than it used to be.
--- --- 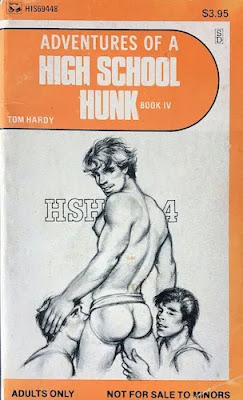 Adventures Of A High School Hunk
Book IV
Author: Tom Hardy
HIS69448
I am not sure what all these 'adventures' entail, but I assure you... there was nothing like that going on during my high school days. That I knew of....
--- --- 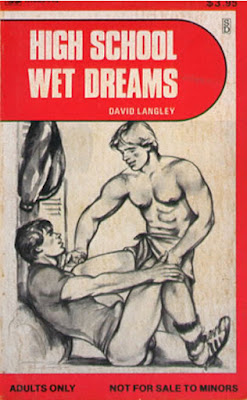 High School Wet Dreams
Author: David Langley
HIS69449
Now this illustration brings to mind an incident that did happen to me when I was in high school. I was in 10th grade and on the track team, running the two mile. After practice one day, it was just me and this one other dude in the locker room. I'd just gotten back from my road run and he was showering.
I went to my locker to strip down and hit the showers. He was one of those fringe guys, in 11th grade. He was on the track team, but had never really shown any interest in athletics before that point. He lived in a house that shared land with the city park across from the grade school. I didn't think he had any friends, but wasn't sure, as I didn't know him all that well.
When I came out of the shower, he was lying on one of the wooden benches near my locker, a towel wrapped around his waist. I stood by, toweling off. We greeted each other, but other than that said nothing. He just laid there. He wasn't unattractive; slim, tall, a dirty blonde - it's just I'd never considered him as sexual. I also didn't know what to make of the situation. Was this a test? Was this not a sexual situation? I kept making furtive, intermittent  glances at his prone body. His general state appeared to be one of ennui. So, I left him to it. Dressed, and bid him good-bye.
I couldn't really risk anything and, quite frankly, at that point I was a bit naïve and had no idea what to do anyway. But there was an energy in the air; a kind of anticipation, expectation lingering.
He quit the team shortly after that and I never saw him again.
--- --- 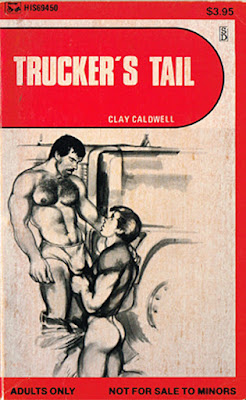 Trucker's Tail
Author: Clay Caldwell
HIS69450
Clay Caldwell with yet another trucker tale. My word, I sure would love to climb up into that big rig. I believe there would be something else 'big' waiting for me in there.
--- --- 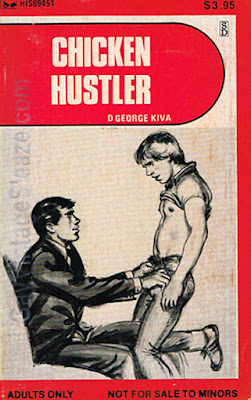 Chicken Hustler
Author: D. George Kiva
HIS69541
The term 'barely-legal prostitutes' is a bit of an oxymoron, no?
Another great illustration. I particularly like the detail of the pseudo-Adidas tennis shoe. I remember when the design with the white leather upper and three red stripes was all the rage. It was sexy in a preppy way. On the other hand, popped collared polo shirts have never been sexy, only begrudgingly tolerated.
--- --- 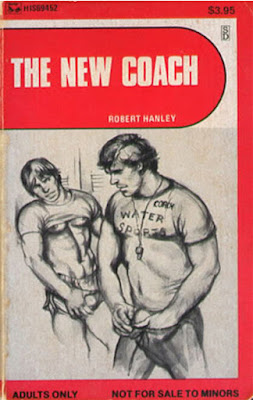 The New Coach
Author: Robert Hanley
HIS69452
Apparently, today is the day for high school stories; yes, I have another one.
The former Phys Ed/Football coach was a silver fox who acted and looked like Bud Grant. He had an office in the boys locker room with a private shower which I used to use and jerk off in when he was not around. Fast forward to 10th grade, Bud Grant had enough of earning bupkis as an educator, saved enough to buy a campground in northern Minnesota and was outta there.
He was replaced by a much younger model, who was 5'8", with blonde curly hair and wash board abs. He also had a thing about using the communal showers with his players/students. So I got to see his dick a couple of times. It was well worth the risk of staring; the man was gifted. And very friendly. One of those clueless types.
The thought of him fueled many a jerk off session during my junior and senior year. Mostly I pictured him hitting on the football quarterback. They were two of a kind.
--- --- 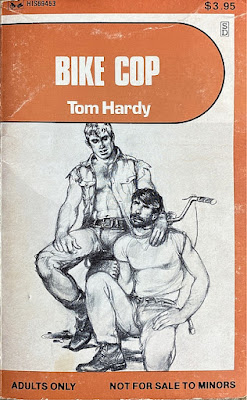 Bike Cop
Author: Tom Hardy
HIS69453
My first thought was those cops who patrol parks and ride bicycles, but apparently, this has to do with motorcycles. I base that on the tire size, Although those handlebars, do look like they belong to a bicycle? Then what is blondie sitting on? Also where is his other leg? That has to be a thick tire; that is not his other leg. And what is that near the wrist of our dark-haired hunk? Is that kickstand? Whatever that mode of transport is supposed to be, the perspective is striking me as all kinds of wrong.
--- ---
Runaway Kid
Author: Carl Williams
HIS69454
(Cover Not Found)
This week's missing piece.
I remember, as a teen, thinking that running away from home was something of a romantic nature. This was bolstered by the plethora of ABC-TV Movie of the Weeks starring bright young performers such as Eve Plumb and Sally Field as wayward adolescents making their way in the world on their own terms, eating partially eaten fast food burgers other more privileged people had left behind, or pulling on a pair of fishnet stockings and a tube top and strutting their stuff on the mean streets.
For some reason, I thought that might be better than living at home and going to high school. I also thought I could do a much better job of it than any of those depicted on the small screen...
At the age of 14, I looked incredible in a tube top and fishnet stockings!
--- --- 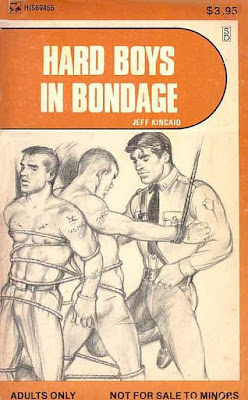 Hard Boys In Bondage
Author: Jeff Kincaid
HIS69455
Well, since this seems to be the day for it, how about yet another high school story?
When I was in 8th Grade, I had a reoccurring fantasy. I imagined that I would be able to kidnap all the boys in the high school. I'd bind them individually with ropes and gather them, making them lie naked on the gym floor. Some, I would tease and play with, while others, I would enact my revenge - although other than yelling at them, I never saw myself doing anything violent to them. I didn't have sex with them. I just liked the idea of being in control and having power over them.
Yes... a psychopath in the making? Or just a typical high school gay boy fantasy?
--- --- Horse-Hung Trucker
Author: Bob Hancock
HIS69456
Another great illustration. Sometimes the illustrator is able to communicate so much more by showing so much less. That lot lizard is a sexy young thing. And, again, I wish all drivers of big rigs looked like the shirtless hunk behind the wheel on this cover.
--- --- 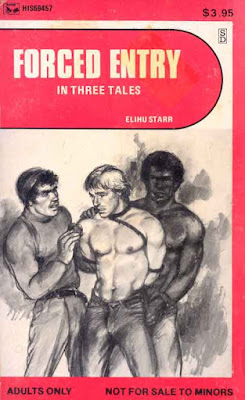 Forced Entry (In Three Tales)
Author: Elihu Starr
HIS69457
A short story collection! Although, I'm not exactly comfortable with the implied subject matter. As fantasy? I suppose between consenting adults, fully discussed, it might be okay. Rape equals violence is something that was drummed into my head somewhere along the way (those women studies courses may have had something to do with it,) so I don't find this subject matter 'sexy.'
--- --- 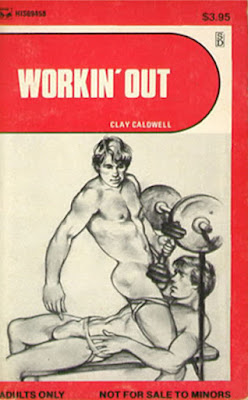 Workin' Out
Author: Clay Caldwell
HIS69458
Never under estimate the appeal of a well-placed dumbbell.
Sadly, I do not have a high school story about the weight room. I did not have an appreciation for working out until I came out at 27. Then? I made up for lost time. I've never stopped working out, except during that time period in L.A. when things got scary health-wise. As soon as I could safely resume working out, I did. It actually helped me recover faster. Now I work out to maintain what I can. It also helps boost my testosterone levels... and who doesn't like that?
Nothing as depicted has ever happened to me at a gym. Well, at least not in the actual gym.
The locker room? That's a whole 'nother story!
--- ---
And that's all for now. Hope you did not mind my rambling.
Until next time...
Thanks for reading!
Runaway - Loleatta Holloway
Posted by uptonking at 6:00 AM

Those are some interesting titles. They seem to be stories that most (if not all) publishers of gay erotica would take a hard pass on due to content.

Ok, Loleatta Holloway? Are you KIDDING ME? That voice!!! It was she and Martha who literally created Black Box, one of my fave albums.
And the high school shenanigans were real in my high school. I gained notoriety because I let a guy show me his dick in the Boy Scouts cabana.
And love the illustrations, of course. Especially the one of the hung trucker...

I was pleased to see the coach in 'The New Coach' had Watersports emblazoned on his tight tee-shirt!