Who Did It Better? It's All Over Now, Baby Blue 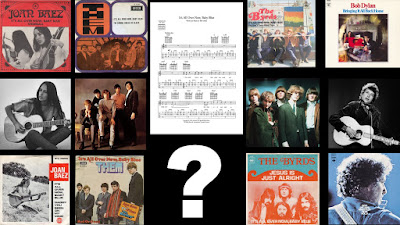 Who Did It Better?
It's All Over Now, Baby Blue
There was a time when if Bob Dylan wrote a song, everybody wanted to put their stamp on it. The first half of the 1960's found the world enthralled by the sound of folk music. It's earnest, forthright poetics a breath of fresh air and a welcome respite from the quaint, jingle/slogan-istic pop music of the time.
Bob Dylan  wrote It's All Over Now, Baby Blue in January 1965 and finished recording it on January 15, 1965, while working on his Bringing It All Back Home album. Recalling this period, Dylan said:

"I had carried that song around in my head for a long time and I remember that when I was writing it, I'd remembered a Gene Vincent song. It had always been one of my favorites, Baby Blue; 'When first I met my baby/she said how do you do/she looked into my eyes and said/my name is Baby Blue.' It was one of the songs I used to sing back in high school. Of course, I was singing about a different 'Baby Blue."

There are a number of theories, all pure conjecture, since Dylan has never named the subject. Given their relationship at the time, many assumed it was about Joan Baez. However, it should be noted that Baez has brown eyes. Other possible candidates include a couple of Dylan's inner circle. David Blue is a longtime friend of Dylan. He can be seen wearing a trench coat on the cover of The Band's The Basement Tapes album. Another possibility is folksinger, Paul Clayton, a Dylan devotee who may have gotten a little too close to the object of his devotion. Biographers have noted that Clayton's use of amphetamines' put a strain on the friendship. The most viable answer? Dylan himself. In Baez's beautiful opus, Diamonds and Rust, she refers to Dylan as having "eyes bluer than robin's eggs".
But whomever the song refers to, it was a hot ticket in the eyes of various record company executives, with a number of established acts wanting to parlay it into their next hit.
Joan Baez recorded a version in 1965, for her album Farewell, Angelina. It was released as a single in Austria, Denmark, Italy, Ireland, Norway, Sweden and the U.K.

The Byrds initially planned to release It's All Over Now, Baby Blue in 1965, as a follow-up to their previous Bob Dylan hits, Mr. Tambourine Man and All I Really Want to Do.  The band's first attempted to record the song was on June 28, 1965. However, the results - an irreverent, Mersey swing inspired take on the song, was deemed uncommercial and it remained in the vaults for 22 years,
A second attempt took place during August 1965. However, the band wasn't happy with this version either and quickly abandoned the idea of releasing the song as their third single. Instead, they threw their support behind Turn! Turn! Turn!. The Byrds' second version of the song has never seen the light of day. But that was not the end of the bands interest in the song.

joan baez. and a VERY young van morrison there with THEM.

I will go with the Byrds. Being a fan, there's not much they do I don't like.

I never cared for Dylan's voice...at all. His lyrics, though....

Yes. Them.
I have never heard of the band but I love the sound! It kinda reminds me a little of Kingsmen ( I love Louie Louie). I'm totally into the sound of that era.
I do have Dylan's two greatest hits records and I've listened to them, but yes, he's kinda nasal and whiny. Joan Baez? Have never really payed attention to her. She does sound like one of those singing nuns though (catholic boy here, too).
I thought The Byrds were going to sound different! They usually rock. And I love some stoner music, but not this one.
Them it is.

You're still in era. Joan Baez would be a nothing without Bob Dylan. BTW, it is said that 1965 was the year Bob Dylan died as he went to an electric guitar. He went silent after that due to outrage of the beatniks.

Perhaps, you could dissect early to commercial Judy Collins. That would be interesting to have your take on that.