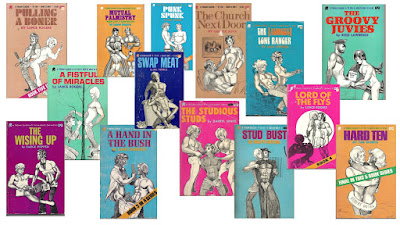 Acquired Tastes XLIII:
Gay Pulp Fiction, Part 41 -
Trojan Books / 3 of 5
Today's post is a continuation of our look at Trojan Books. Based on the little information I've found, these books date from 1971-1977.

Here, the covers are presented in order of publication, based on the company's sequential numbering system and a list published in the back of one of Trojan Classic's titles. Those lists in the back of the book were the primary way in which adult publishing companies were able to survive. The lists we accompanied by directions on how to order additional titles. These mail order sales helped keep the company afloat. And, yes, for discretion's sake, all deliveries were promised to arrive in plain brown packaging. 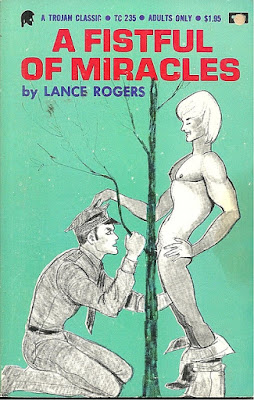 A Fistful of Miracles
Author: Lance Rogers
TC #235
A whorey old take on The Giving Tree, perhaps? Lots of sap in that there tree. Let's just hope what it 'gives' isn't an STI! 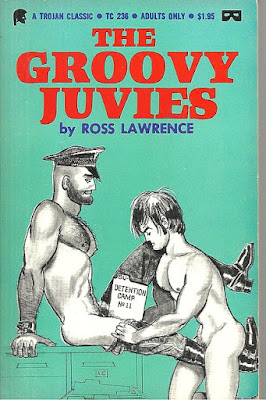 The Groovy Juvies
Author: Ross Lawrence
TC #236
Remember The Groovy Goolies? It was a Saturday morning cartoon that ran on CBS for two seasons. I remember they had segments that were like Laugh-In and also would feature made-up rock groups. All brought to you by the people who created The Archies.
Well, this book would appear to offer some under-age hijinks. I mean, once you hit 18 years of age you're no longer considered a juvenile, right? So... yeah. Hmmm. On the fence about stuff like this. 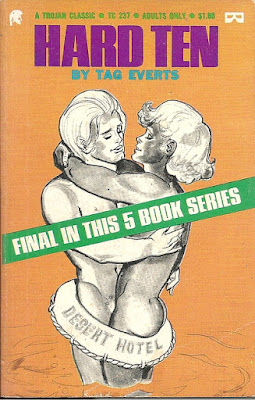 Hard Ten
Author: Tag Everts
TC #237
Aww, Tag Everts finishes up his 'quintology' with a spot-on title. I assume the books in this series all take place at a casino in Vegas. This cover art isn't bad... except, that does appear to be a lot of carefully coiffed hair. 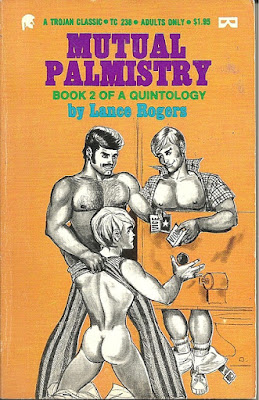 Mutual Palmistry
Author: Lance Rogers
TC #238
"Wanta get wiped out in juvenile detention? Then don't run up against Chance Kilgore - the wildest stud who ever graced a three-way shower head!! His brand of 'con' can only turn you on - and turn your pockets inside out! Beware of beautiful, seventeen year-old studs who have a million dollars stuffed in their jeans and it cost you many, many dollars to find it out, inch by inch!!" 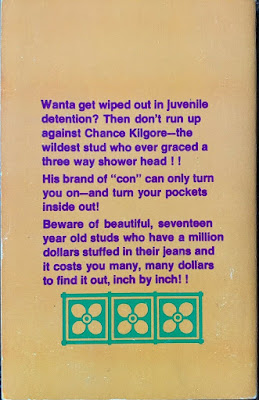 Seriously? Who wrote that back cover blurb? It's terrible. Makes no sense. If I was the author and saw that I would want blood. I mean, what appears on the back cover or any advertising is a reflection of the quality of the writing inside. Maybe proof reading wasn't something anyone bothered with back in the day? I mean, what is that last sentence? Such a shame.
Also... this is book two in a five part series. So, what is book one? Previous to this we have three books by Lance Rogers. Two can be found here. Or it could be the first book in this post, A Fistful of Miracles. Thing, I'm not seeing any correlation. Maybe it was unplanned?
The Midget's Giant
Author: Len Harrington
TC # 239
(not found) 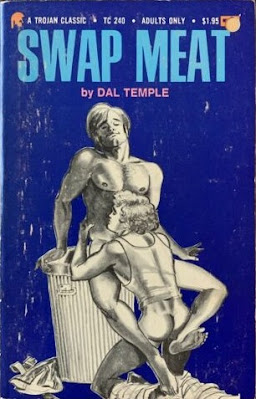 Swap Meat
Author: Dal Temple
TC #240
"A rock group really gets rolled in this blistering tale of underworld activities; swapping sex for drugs, jobs for sex, and sex just for the hell of it. You'll boost this book after it turns you on with the straight dope about border junk operations!" 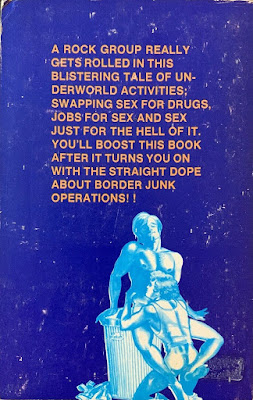 This back cover blurb is much better, though I have no idea what is meant by 'border junk operations'. I mean, they state that like it's something everybody should be familiar with. I looked it up and the only thing that came up was some right wing nut complaining about the amount of trash left behind by immigrants crossing the Mexican border. It is truly a problem, but I would think the trash that Fox News serves up on a daily basis should be of more concern. 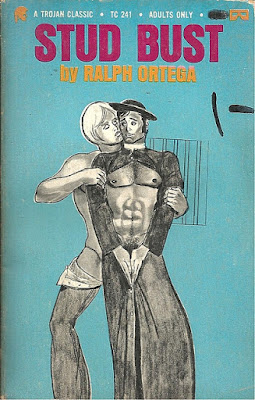 Stud Bust
Author: Ralph Ortega
TC #241
There are bars on that window. So, is this about taking advantage of a priest in prison? Oh, it could be one of those do-gooder chaplains! Oooo. Prison romance. I could get into that. I adored that series with Christopher Meloni... though I would stay out of the shower room, if I were you. Capiche? 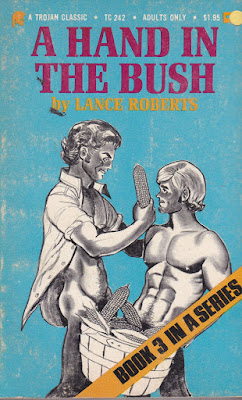 A Hand In The Bush
Author: Lance Roberts
TC #242
Okay, maybe this is a series about hand jobs? My word, those are some suggestive cobs in that bushel basket! Nice artwork. Though, from the look on that dude's face, I'm a bit concerned what he has planned for that poor ear of corn. 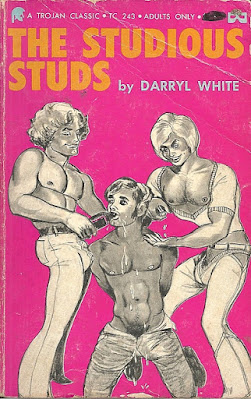 The Studious Studs
Author: Darryl White
TC #243
Oh, another 'let's defile the tutor' book. The first one we saw? Over Eighteen Over Eight by Rick Tulane. This is one gay trope I am unfamiliar with. But, provided they are college age students? I approve. Then again, if I'd known this sort of thing happened, perhaps I wouldn't have been such an over-achiever when it came to high school. 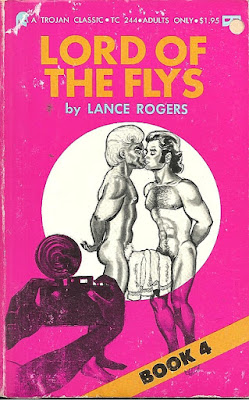 Lord Of The Flys
Author: Lance Rogers
TC #244
Book four? Huh. 'Flys'. Umm. Hmmm. Artistic license? Or a questionable spelling abuse? And, again, with the giant coif. It's a case of helmet hair. Who's he kissing? Doris Day? 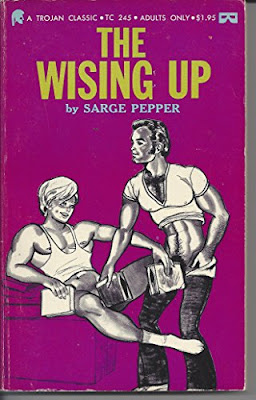 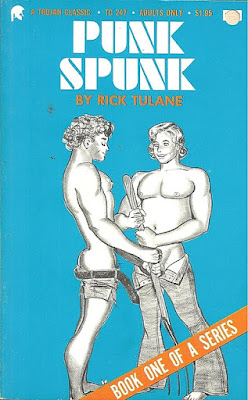 Punk Spunk
Author: Rick Tulane
TC #247
One of my favorite titles. Of course, the 'punk' I have in mind doesn't begin to appear on the scene until at least six years after this book was published, so a bit disappointed about that. I was hoping for a little CBGB action in the mens room (which must have looked like a subway toilet). Instead, we get these two kids who look wholesome enough to be extras from Mayberry R.F.D. 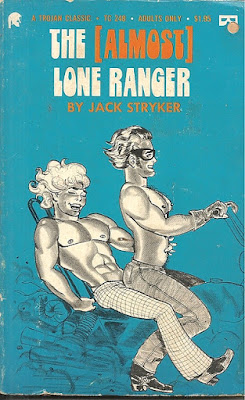 The (Almost) Lone Ranger
Author: Jack Stryker
TC #248
There were a lot of gay-takes on the Easy Rider film. Something about all that horsepower between a man's legs? Or riding pillion behind a many in a leather jacket? The boots? The chaps? The bugs in your teeth? Ah, yes... the stuff of romance. 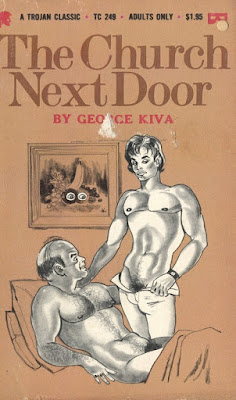 The Church Next Door
Author: George Kiva
TC #249
This cover kills me. I adore the eyes in the still-life on the wall. Could it be... Jerry Jr.? I love that it's a painting of fruit (get it???). The dude standing with the gherkin in his chinos does not look like he's into this whole scene. And then we have Pastor Pete, he of the terrible combover. Still.. nice pecs on Pastor Pete. I'd do him, bad combover and all. 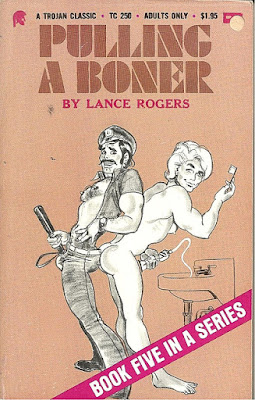 Pulling A Boner
Author: Lance Roberts
TC #250
This is one of my favorite covers. I like the expressive faces, the Tom of Finland bulge on that cop, the melding buttocks, the toothpaste - held just so - shooting forth... it's sexy fun. My only issue is the blow-dried helmet hair on The Tooth Fairy. But why quibble.

--- ---
That's it for this week. Next time, part four of five. Hey, given Trojan Books penchant for quintologies (not a real word), how appropriate that we're covering their covers in five installments!

Thanks for reading!
The Lone Ranger - Quantum Jump

Originally released as a single in 1976, the BBC banned Quantum Jump's The Lone Ranger due to the drug and homosexual references. However, thanks to Kenny Everett, the song received a lot of airplay on his TV & radio shows, and was re-released in 1979.
Posted by uptonking at 6:00 AM

I guess back in the day there wasn't so much angst about high school students getting it on. Some interesting cover art, though. And I agree the coiffure seems too overdone. Kisses.

I am always fascinated by the artwork. It's between lurid and amateur and no publication would get away with it today. Not to mention those back blurbs!!