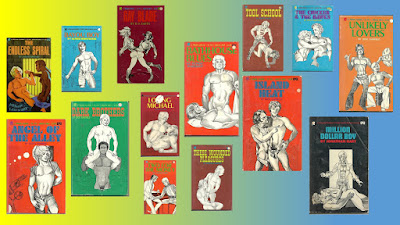 Acquired Tastes XLIII:
Gay Pulp Fiction, Part 43
Trojan Classics, 5 of 5
Today, we take a final look at Trojan Classics. Very little information is available, which is surprising, given the breadth of their output. The earliest book I could verify is 1971 and the latest 1977. They had a number of imprints: Trojan Classics, Locker Room Library, Golden Helmet Classics, Spartan Classics, Gay Way, Svensk Series and Zorro Books.

Trojan Classics all have a small Trojan Helmet in the upper left corner of the cover. They also have a mask of Zorro in the upper right, in reference to their distribution company. As imprints go, this one is dedicated strictly to gay male subject matter.

GX, Inc. had a penchant for black ink/pencil drawings presented on solid color backgrounds for their covers. This is true of all their various imprints.

I did my best to track down as many covers as I could. They are presented in order of publication. I am basing the order on their sequential numbers. 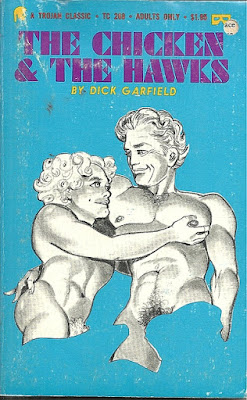 The Chicken & The Hawks
Author: Dick Garfield
TC #268
I've never understood the whole chicken hawk thing. It creeps me out, feels predatory. I know it can result in a mutually rewarding  relationship, but the implied power imbalance remains questionable. Through the years, this relationship dynamic, in my opinion, has given gay men a bad reputation. It's where that whole 'recruitment' argument comes into play from the conservative right. It's a bullshit argument, but the fact that this type of relationship exists and is celebrated adds fuel to that fire. It's not for me, not who I am... but, to each their own? 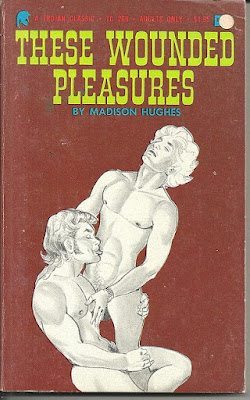 These Wounded Pleasures
Author: Madison Hughes
TC #269
What a terrible title. The artwork here, for once, isn't that bad, but what is with the naval licking? I've noticed this in the classic gay pulp novels from this period that I've read... someone is always licking out someone's naval. I don't know that I, who have done a great deal, have ever done that. Not on purpose. I think all you would find is dryer lint. But... to each their own. 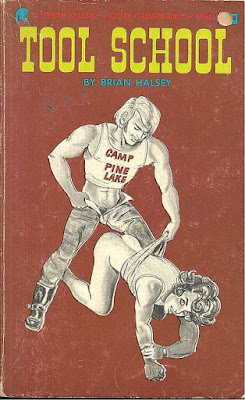 Tool School
Author: Brian Halsey
TC #270
Hee hee. Tool School. I love it when it rhymes. The artwork, again, not bad. The 'Camp Pine Lake' intrigues me. Maybe it's one of those trade school camps bad boys are sent to in the summer? Did such a thing really exist? Well, maybe in our wettest of dreams. 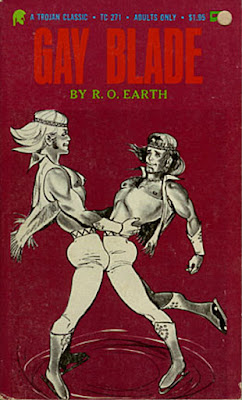 The Gay Blade
Author: R. O. Earth
TC #271
I always wondered where the term 'gay blade' originated. According to Wiktionary it refers to a swashbuckler, a dashing swordsman, a dashing youth, or a man displaying homosexual qualities. Here? It refers to gay hippies on ice! An interesting concept for sure, but not a touring show that will be appearing at your local ice arena any time soon.
Night Hawk
Author: Gordon Moore
TC #272
(Not Found) 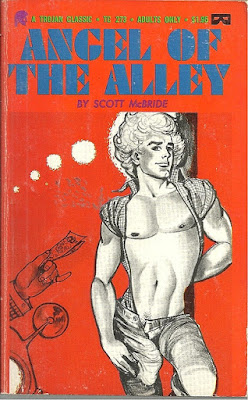 Angel Of The Alley
Author: Scott McBride
TC #273
"Ricky Carson had the blinding golden good looks of an angel and the dark bitter past of a poor, slum background. His ten inches kept that poverty at bay . Then he met Barry Ashton, millionaire businessman and social leader whose secret passion and tight purse changed Ricky's life abruptly... and for the worse...." 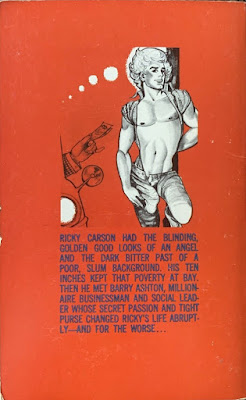 Back Cover
Hmm. I do like the line 'His ten inches kept that poverty at bay." Always use what the universe gives you! Again, artwork, not bad. I can't imagine how an influx of cash could make things worse? But then... influxes of cash and me? Not well acquainted. 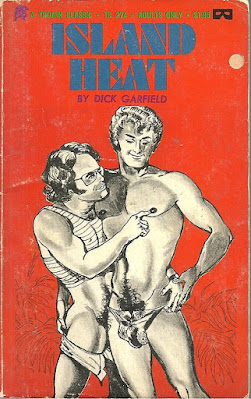 Island Heat
Author: Dick Garfield
TC #274
Dick Garfield wrote a lot of books for Trojan Classics. Thing is, it's hard to know whether that pseudonym represents a single individual or a number of people. Reading the books credited to that name would be a good way of discerning that. An author's 'voice' is always telling and can typically be detected, no matter the subject. 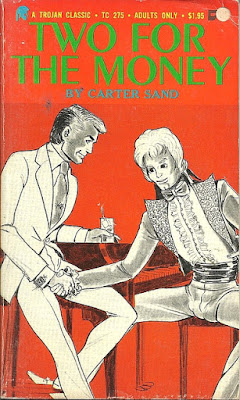 Two For The Money
Author: Carter Sand
TC #275
Check out that tux! Las Vegas worthy. Like something one would buy at a Siegfried and Roy garage sale. That cumberband is so tight it looks like it could cut off one's blood supply. Although, from the looks of it... all of that dude's blood is flowing southward, if you know what I mean. 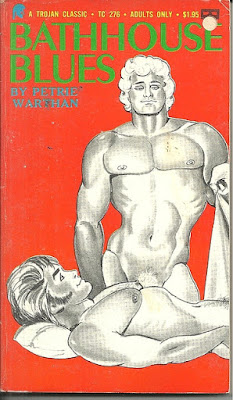 Bathhouse Blues
Author: Petrie Warthan
TC #276
Based on the expression on the face of the man doing the unveiling, it's hard to tell if he's impressed or not. I guess we can assume he is, because a book about an unimpressive appendage wouldn't exactly 'get the job' done.. I miss bathhouses. I learned recently that the under-the-table one that operates here in Minneapolis has been open throughout the Covid-19 pandemic. (I know, I know... could he please get through one post without mentioning Covid? Jeesh.) That is messed up. The part about them being open. I typically only visit once a year... but this? This may not be the year. 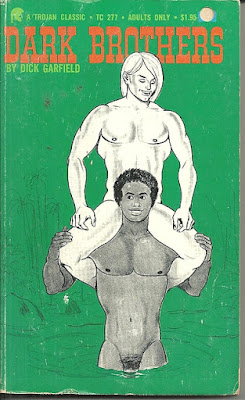 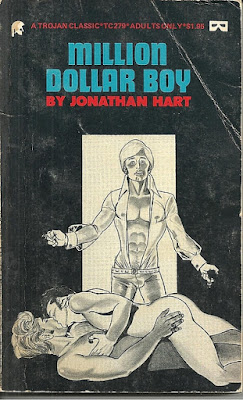 Million Dollar Boy
Author: Jonathan Hart
TC #279
Check out that shirt! Puffed sleeves in a sheer material tucked, but not buttoned - in fact there are no buttons. Set off with a tight pair of hip huggers and a wide, studded belt, this swinging sister is set for a night on the town... but, oh, no! When she opens the door to her partner's bedroom... what does she discover?
My advice? Don't make a scene and you might get invited in, my dear. 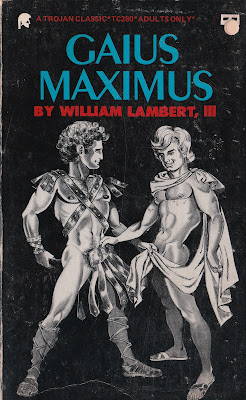 Gaius Maximus
W. J. Lambert III
TC #280
W. J. Lambert III is a pseudonym for the prolific William Maltese. I don't think there is a gay pulp fiction publisher he didn't write something for; the man's work is everywhere. The artwork on this one? Very nice. 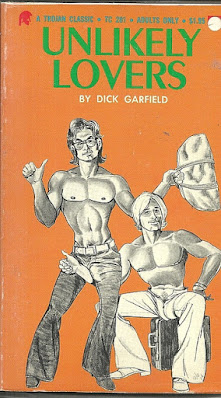 Unlikely Lovers
Author: Dick Garfield
TC #281
Awww. Hitchhikers. Fun in theory. Hella scary in reality. Dangerous for both parties, I am surprised anyone in their right mind would attempt this today, but on occasion, I do see someone with their thumb out. Guess it's no more dangerous than hooking up with a complete stranger you met on-line, but still. At least with the hook-up you know you're going to get a little. Hitchhikers? You're more likely to get lice than laid. Just saying... 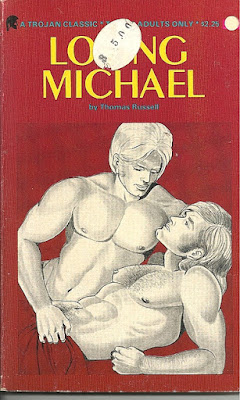 Loving Michael
Author: Thomas Russell
TC #282
The title sounds like a 1973 ABC-TV Movie of the Week. I can imagine the theme song, all tinkly piano runs and haunting, sweeping strings. Ah, it was a golden age... Not for gay-themed movies. No. Treacle? Yes. Very much, yes. 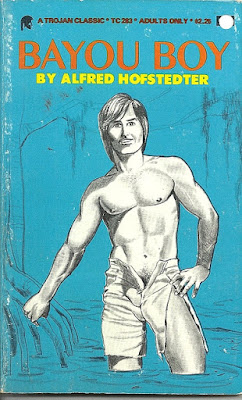 Bayou Boy
Author: Alfred Hofstedter
TC #283
This one has me thinking Creedence Clearwater Revival for the soundtrack. That swamp boy is sure all cleaned up. And he appears to have all his teeth, too. I do like the rip in the leg of his cut-offs. Very sexy. And my, my, my... that's quite the 'swamp monster' he's got packed in those shorts. 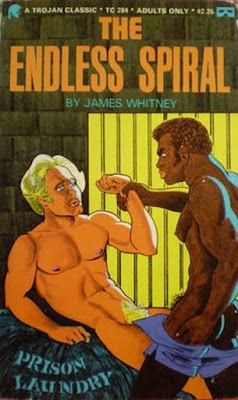 The Endless Spiral
Author: James Whitney
TC #284
So, this cover is a bit of a surprise, huh? It is the last in this numbered series. Maybe they decided to blow the remaining budget on a full color cover. It's very comic book, but very effective. I wish they would have called this one 'Prison Laundry'... you know, because they all have a load or two to do?
--- ---
And that does it for Trojan Classics. We have other imprints to cover from GX, Inc. - but, since the artwork is very similar, I think I will circle back to it later. Instead, I think I will try to find something a little more colorful.
That's all for now.
Thanks for reading...
Hitchin' A Ride - Vanity Fair
Posted by uptonking at 6:00 AM

How many books, total - across the imprints, did they publish?

I'm constantly amazed by the covers.
They're lurid but strangely coy with all the hand placement and whatnot. I wanna read Angel of the Alley and Loving Michael!
I think that the advent of Betamax and new technology really made a dent in their sales.
I tried to get a pair of books like this in a shop and they wanted way too much morney for them!

Some of the titles are a hoot.