Who Did It Better? Baby It's You 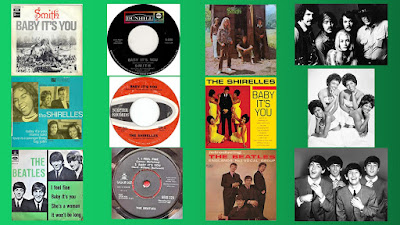 Who Did It Better?
Baby It's You
This week, we're taking a look at a song suggested by our beloved Anne Marie of Philly; two competing versions and the version that topped them both on the charts!

Baby It's You is a song written by Burt Bacharach, Luther Dixon, and Mack David. Dixon worked closely with the Shirelles, while Bacharach would go on to form one of the all-time great songwriting partnerships with Mack David's brother, Hal, writing numerous hits for Dionne Warwick. One notable feature of this song is its minor-to-major key chord changes on the verses, a technique Bacharach made a fortune playing with throughout the 1960's and early 70's.
Recorded by the Shirelles and the Beatles, it was a hit for both. However, the highest-charting version of the song belongs to someone else; a band named Smith, featuring blonde siren, Gayle McCormick. They took it all the way to the #5 spot on the US charts in 1969.

Luther Dixon actually handled production for the Shirelles' version. When released as a single in 1961, it became an instant hit, reaching #3 on the R&B chart and #8 on Billboard's Hot 100. It later appeared on the album, Baby It's You, which also featured the group's next smash hit, Soldier Boy.
The Beatles had performed Baby It's You as part of their stage act for years, finally recording it on February 11, 1963 for their first album, Please Please Me. Their American label, Vee-Jay Records, would include it on their release, Introducing... The Beatles. The song was recorded in just three takes with John Lennon taking the lead vocal. While The Beatles' version differs from the Shirelles' version by repeating the second verse instead of the first, the vocal arrangements are lifted directly from the girls' 1961 original. Interestingly, The Beatle's studio version was never issued as a single.
That changed in 1994, when a live version, performed by the Beatles, would be released on Live at the BBC. This version adheres even closer to the Shirelles' version than the studio recording. It was issued as a CD single and a vinyl single (actually an EP) in 1995 in both the UK and the US - a Beatles' first in nearly a decade. The single/EP reached #7 in the UK and #67, state side on Billboard 's Hot 100.
Smith was little more than a bluesy covers band, toiling away in hotel bars, nightclubs, and roadhouses. They'd issued a previous single, with one of the guys in the group on vocals and it went nowhere. Then they added a bit of visual appeal in the form of Gayle McCormick.
McCormick had spent years carving out a solo career singing the songs of Tina Turner and Etta James.
The group caught a big break when they were 'discovered' by Del Shannon, who got them signed to ABC-Dunhill Records.
Baby It's You was released as a single on Dunhill Records in 1969. It would also appear on their debut album, A Group Called Smith. Their take on the song is a definite departure from that of The Shirelles and The Beatles and it paid off big time. The only hit the group ever managed snagged the #5 spot on the Billboard Hot 100.
Well, there's the whole story.
Now, on to the competition.
The Song: Baby It's You
The Competition: The Shirelles vs. The Beatles vs. Smith

Baby It's You - The Shirelles
Baby It's You - The Beatles
Baby It's You - Smith
The Shirelles
Big wall of sound beats. It was the times, baby. Hollow, but it's the biggest and the best they could capture. Weird that the male voice takes the pole position with the back-up vocals. Ah, those lead vocals (Shirley Owens). So sly and quirky. So knowing. Her tone is rich and throaty, a nice crackle in her voice. It's deceptive because you know she's coming from a place of strength. And that phrasing. I love the way she clips words (...any old way). This is such a down track. And her performance is rather coy until she hits the 1:30 mark with those shouted "I don't want nobody..."
Oh, dear. That weird keyboard comes out of nowhere and it is not pretty. And what exactly does she sing when she reenters? Sort of a whoa ho ho-o-o? But that is odd stuff. She sure knows herself, though; one sure vocalist. Man, that is some confident phrasing, holding back the beat like that. And this mix; such a great showcase. With her vocals popping over the top like that every once in awhile. The backing vocals simply lulling the listener. Adore. Weird that they had that dude's voice in the beginning and nowhere else. Man, I love this song.
The Beatles
Huh. Jangly I expected. The harmonies aren't as interesting or full as I'd hoped. And, after listening to all the nuance The Shirelles brought to the table, Lennon's interp feels rather rushed and flat-footed. He's downright flat in places and his singing is not very musical. I do like it when he goes into his head voice for the oh-oh's. I do not like it when he starts shouting in the chorus. No, no. Given the depth Shirley Owens brings to her reading, this is nothing but white boy whining.
Huh. I expected more from them. I like the jangly guitars. The feel is fine, as is the mix. Perhaps Lennon sang this song one time too many. This lacks depth. It's tossed off and not even remotely introspective.
Smith
What a difference eight years makes! That rhythm track. This, by the way, is an arrangement created by Del Shannon (Runaway, Sea Of Love, Little Town Flirt). Wow. This is a completely different song. The Hammond organ? Rudimentary for any track laid down during this time period. I love her vocals and the mix. Very sensuous. I see why this was a hit. Hmmm... but then the chorus.
She loses me. She pushes too hard too fast and it comes off a bit shrill. There's still a nice hood on her overall sound, but the shouting doesn't work for me. I like the subtlety of the horn section. Very restrained. The verses remind me of what Linda Ronstadt would do with certain songs as her solo career finally started taking off. McCormick always goes screechy on the chorus. Bummer. I know everybody wanted to ape Janis Joplin during this time period, so I get that. But shouting is not McCormick's strong suit. Her interp on the verses, slight, is breathtaking.
Okay... this instrumental break sounds like so much 1970's soundtrack fare, it's almost cliché. It's the crazy build up, bluesy, but a tad psychedelic. And by that third chorus? Know what? I like it. I like her vocals there. Yes, over the top with the scream, but after that build up, that now feels way more appropriate. Hmmm. A tad shrill on the play out, though. I like the horns. I like the mix. This is a lot of fun.
The Verdict
The Shirelles.
Makes me want to run out and buy a bunch of their music.
Owen's lead vocals are so nuanced, so intricate... I have no idea how you would duplicate all that as a vocalist. She is just amazing. Her phrasing is one for the ages. And such a full-bodied, lived-in sound. I believe her. Hers is the winning story, here. She tells it the best.
I love the feel of Smith's version. That is an incredible arrangement, with the horns and a great mix. Spooky. McCormick has an amazing gift... but aping Janis Joplin? Not it. Those verses though? Absolutely seductive.
The Beatles? Huh. Go figure. They don't. Not when it comes this contest. But then it was for their first album. Apparently they still had a lot to learn. Well, everything they touched was not perfect, but any means.
--- ---
Okay, that's my take on things. Your turn. Leave your thoughts in the comments section. I love to hear from you.
Thank you for reading. And thank you, Anne Marie, for the suggestion.
If anyone else has something they would like us to take a look at, leave it in the comments section. This one? It has certainly been a game changer as far as the criteria for this series. So... fire away.
Posted by uptonking at 6:00 AM

I remember when the Shirelles came out with this song. It was the same time as "Leader Of The Pack" and "My Boyfriend's Back" were also popular.

SMOOCHES for the shout-out!

I actually like all 3 versions. that being said, the smiths version tries too hard, as you mentioned. sometimes simple and uncomplicated is better.

Personally? I love "that old time rock and roll." I'll stick with the Shirelles. 😀

I never heard of the song. Listening to it, I didn't like any.

If strong held and had to pick, I would have went with Smith. I found all of them hard to listen too. None of them held my attention.

The Shirelles.
One more to add to my list of 'wants' when looking for vinyl.
I did not like The Beatles' version much. And I like the fab four. But not here.
The Smith version was very 'soundtrack' from the seventies as you said. And she seemed to scream? IDK.

Girl groups from the sixties were the ish.

I have been a fab'four fan since I paid a visit to my mother's womb, but it seems to me that their version of this song is of minor interest among their production..
I did not know of The Smith's version. I liked it very much until it came to the "what-about-sounding-like-Janis-Live?" thingy. Quite in the mood of the time when set back in the context, but not that memorable.
I was not born yet when The Shirelles recorded that song (anyway it took years to LP's to cross the ocean and reach Europe back in those days), but to my ears - and guts - they remain those who were blessed with feeling what they were singing and how to sing it.