Who Did It Better? Could It Be Magic 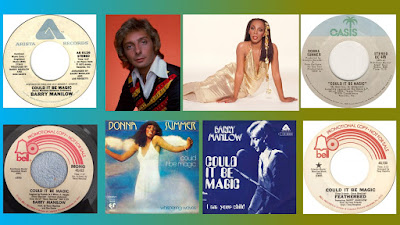 Who Did It Better?
Could It Be Magic
This one is going to require some patience kids. First off, we have a very unique situation here, where the same artist took three (actually four) different swings at this particular ball. Then there is a matter of length... this is a long ass song. But couple that with a disco version? And you know it's going be a matter of time and patience. Fortunately, we are mostly dealing with edited versions, trimmed to fit the 45 format.

Hahaha
Your story with the piano teacher? I loved it. I can imagine you smiling slyly as you slipped that section in. As for the song, I have that Donna album! Hers is the only version I'd heard, so listening to Barry's was illuminating.
I love how you tear apart these songs. The first version did sound like the beginning of the Love Boat, TBH. I agree with you the '73 version could be the best.
But I like Donna's so there's that.

Well, I like Manilow's versions - all of them. In my mind, the arrangements fit the lyrics as a love song. But there's something about Summers' that feels...good; hopeful. The duet does that, too.

I would love to say Donna Summer. Nope

But not a fan of the song and didn't even listen to Barry Manilow's. I can't not take him.

I'm definitely not a "Fanilow". There's a certain formula that starts with over-production of vocals and always seems to end in a big overwrought crescendo. Predictable and boring.

I like the Donna Summer version but hadn't heard it for so long I had forgotten about the organism which seems to be her "Love to Love You Baby" moment in the song.

Manilow '73 by far. Keeping in mind John Denver was doing 'dreamy' type tunes then too. Donna Summer was club music and could have been sung by anyone as long as the beat was there.

My favorite Donna Summer song was actually her cover of "MacArthur's Park". Another over produced original but she could do no wrong with that amazing voice!!