Who Did It Better? Woodstock 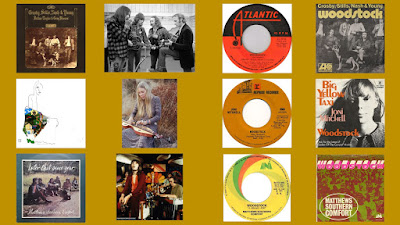 Who Did It Better?
Woodstock
For today's installment, we climb aboard our musical way-back machine to take another look at a song written by one performer, but made popular by another. This is Joni Mitchell's second appearance as a songwriter, here, at WDIB. Her first was a look at her classic Both Sides Now, made popular by Judy Collins.
This week, we also revisit the story of a little-remembered band: Matthews Southern Comfort; a band that would come to learn firsthand exactly what a double-edged sword success can be.
Now, on to the story...

I had never heard Joni sing that. It's very RenFair, like you say, very medieval. It's a trip, though. I wonder what listening to her music while being stoned would be.
I think my fav is MSC, too. That song sounds to me like I imagine the seventies sounded like to people listening to music then. It's groovy but it rocks. And I like his voice.

CSN&Y had the rock version, MSC had the soft version.

CSNY and MSC are the tie for me. Mitchell was never my favorite vocalist; something a bit too....thin?....too high?....too....something. I know the singer/songwriter was all the rage then what with Carol King and Carly Simon, et al...but I always thought Mitchell should've stayed un-hyphenated.
Kisses.

I like the CSN&Y version because it was the first I heard and I was fourteen in 1970. I don't like Joni Mitchell's voice at all and never heard her version. Never will. I did try here. Anyway, MSC version I also liked. It sounds different here than when I first heard it. Flatter. I will always be grateful to them for clearing up the words. Thanks to them I discovered, years later, that CSN&Y were singing "this he told me". For years I sang "Mister Toby."