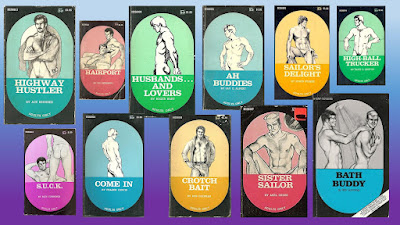 Acquired Tastes XLIII
Gay Pulp Fiction, Part 72
HIS69, Part 1 of 20
Oh, this is a bit of an undertaking.
Welcome to the beginning of a very lengthy look at the HIS69 imprint.
It remained active from 1971 thru 1988, delivering an astounding 240 titles. Their numbering system was a bit odd, though. The first batch was numbered 6901-69281. Then, for reasons one cannot fathom, they started up at 69401, popping out titles until number 69650  Why? We may never know, as information on these imprints remains quite elusive.
The source of all this lovely porn? Why, Surrey House, Inc. / Surree Ltd, Inc. of San Diego and Santee, California, of course. This imprint was distributed by the same company as Trojan Books, Manhard Books, Gay Books and Gay Way Books; the Zorro Distribution Company, also operating out of San Diego.

Yes, it seems these imprints and several others are all related. Frequently, in the back of the book, where they offer other titles to purchase, they have listed titles from all the various imprints Zorro Distribution Company dealt with. Also, many of these titles, with original artwork, were simultaneously republished under the Gay Books imprint and then, later, also republished under the ManPower imprint.
That said, it gets a bit confusing, especially from the viewpoint of a collector. Me? I just collect for the covers, although the completist in me is eying the Trojan, Spartan, and Gay Way imprints. I do like all my ducks in row... and numbered sequentially.
The artwork for the HIS69 books would go through only two minor shifts with all featuring ink drawings by various uncredited illustrators - artwork quite similar to what we saw with the Manhard imprint.
We'll be tackling a dozen titles each week, which means we'll be stuck on this one for a full 20 weeks! A long haul, for sure, but I'm sure there'll be plenty to catch your eye.
Let's dive in! Here are the first dozen titles. 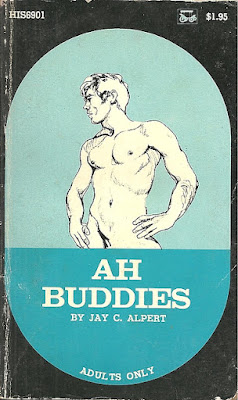 Ah Buddies
Author: Jay C. Alpert
HIS6901
I'm not sure I understand this title. Does 'AH' stand for something? Or is it like an orgasmic 'ahhhh?' Or is it a statement of confirmation upon discovery, as in "Ah, buddies!" If the latter, shouldn't there have been a comma after ah? No? Well, I'm no English major (can't you tell?) My main beef about this one? Someone erased that dude's genitals! Really? Yes, it was 1971, but these books were only sold in dirty book stores and the only people seeking these out were gay ones, so... why hide the sausage? Seems a terrible waste, but it's something that takes place throughout the series, although they do get a tiny bit more clever about doing it. This dude? They just took the eraser end of a #2 and neutered him. He's a eunuch... a sexy eunuch, but still a eunuch. Peens are made to be seen!
--- --- 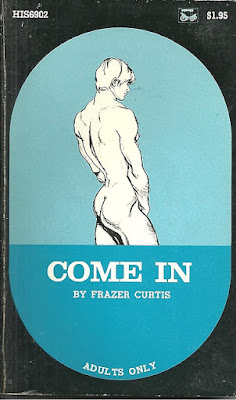 Come In
Author: Frazer Curtis
HIS6902
Same lad, different view. So, peens are out, but asses are in! Which is a good thing, because a number of these illustrators have a way with pencil and ink when it comes to creating a lovely looking bum. You may have noticed that I've stopped researching and commenting on the authors. By this point, it's pretty clear they are all hiding behind untraceable pseudonyms.
--- --- 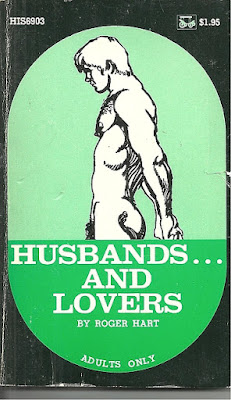 Husbands and Lovers
Author: Roger Hart
HIS6903
Husbands And Lovers is the title of a 1991 Italian film about a woman in an open relationship who discovers S&M in the arms of her lover, a pianist. It sounds like a theme song written by Burt Bachrach for a movie from 1971.
--- --- 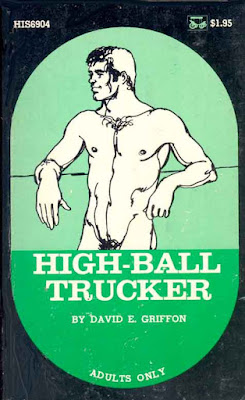 High-Ball Trucker
Author: David E. Griffon
HIS6904
Is this referring to a trucker who drinks high-balls on the road or a trucker whose balls recede back into his body cavity while engaging in adult rest stop activities? I might have to track this one down in order to find out. As for the cover? Pity about that editing...
--- --- 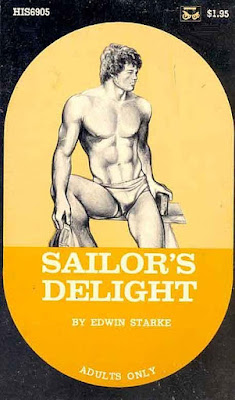 Sailor's Delight
Author: Edwin Starke
HIS6905
Lots of depth and warmth in this artwork. Of the three or four artists on display here, this one's work is my favorite. As for sailor's delight, that is actually an item on the menu of my favorite Asian take-out place.
--- --- 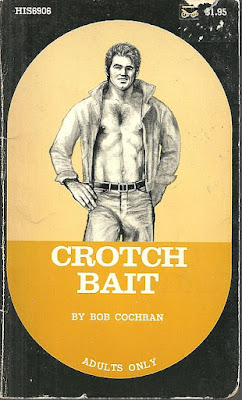 Crotch Bait
Author: Bob Cochran
HIS6906
Why, yes... this hunk makes quite the impression and is sure to raise a lot of interest. Subtle and nicely done. Bob Cochran is credited with a number of titles for this imprint, so you'll be seeing his name a lot.
--- --- 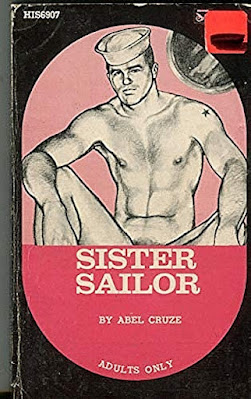 Sister Sailor
Author: Abel Cruze
HIS6907
I have never heard this term... 'sister sailor.' And I don't think it actually means anything. When I Google it, all that comes up is Sailor Moon crap. That said, I rather like it when besties call each other 'sister.' My bestie and I were referred to as 'the scissor sisters' before they were a pop group. We had a habit of walking up to men with ponytails, mullets and the like and mimicking cutting their hair, as in... get rid of that crap, it looks like hell. I also had a bestie with whom I used to sing Sisters from the film White Christmas. Yes... I used to have me some friends...
--- --- 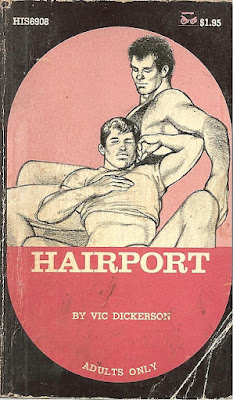 Hairport
Author: Vic Dickerson
HIS6908
So, I take it this is a disaster film that takes place in a hair salon? Imagine the drag queen that gets to dress up like cock-eyed Karen Black for the sequel! Such fun!
--- ---
(Cover Not Found)
Easy Come
Author: Bob Cochran
HIS6909
Look for this same title credited to a different author later in this imprint's history.
--- --- 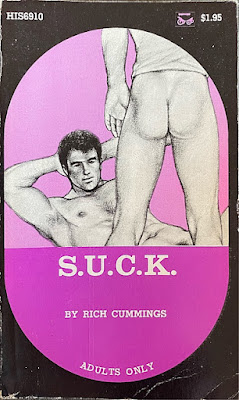 S.U.C.K.
Author: Rich Cummings
HIS6910
Is this like M.A.S.H.? I know people who were gaga for that series and I remember how it won or was nominated for awards constantly during its lengthy run... but it was never my cup of tea. I appreciated Loretta Swit, for a bit... she seemed to be the Cruella De Vil of the camp. But Alan Alda could get awful whiney and it struck me as a bunch of comedy stereotypes running around. In fact, Jamie Farr always struck me as an actual Muppet.
--- --- 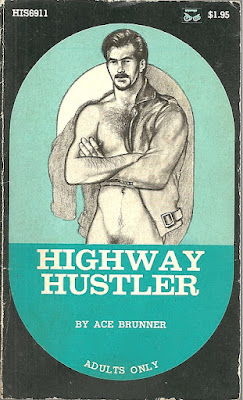 Highway Hustler
Author: Ace Brunner
HIS6911
Cue up Bette Midler's Daytime Hustler. I find the concept rather romantic, in a tainted, 1970's way. Probably due to Jon Voight in Midnight Cowboy, a film I can no longer bring myself to watch because Voight has turned out to be on the wrong side of everything.
--- --- 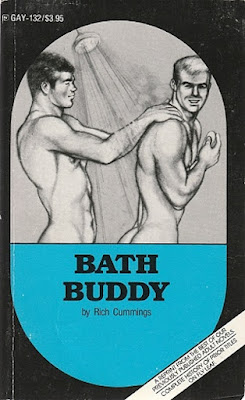 Bath Buddy
Author: Rich Cummings
HIS6912
Oh, I adore the concept on display, here... although that visual editing has, again, ruined the moment. Note: This is not the HIS69 cover, but the Gay Books one - one of the republished versions with the original artwork.  Why they did this? Who knows. Rich Cummings is another name you'll be seeing a lot of, by the way. Great pseudonym.
--- ---
Well, that's the first of 20 posts, dears. Yes, 20 groups of twelve for just one imprint. You'll have to be patient and forgive the completist in me... but I want to share all of them - it's simply my nature.
That's all for now.
Until next time...
Thanks for reading.
Wives & Lovers - Dionne Warwick
Posted by uptonking at 6:00 AM

Who knows about those numbers? I think they kept the numbering by inertia, probably. Or maybe it had to do with accounting? Who knows!
But I do love the artwork, even the covers that they so haphazardly tried to fix. Love me some one-handed reading.