Who Did It Better? I’m Coming Home Again 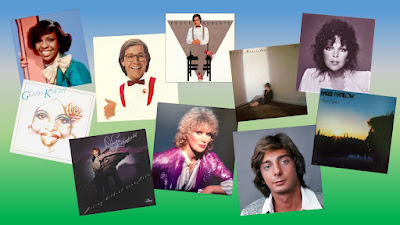 Who Did It Better?
I’m Coming Home Again
Today we take a look at one of my all-time favorite songs (I can say that about so many!) A real gem written by a pair of my favorite MOR songwriters. Despite interest from a number of well-established recording artists, the song never realized it's true potential.

Was it circumstances or changing tastes which prevented this one from becoming a part of the American Songbook? Let's dive in and find out...

Roberts was the first to record it in 1977, as part of his self-named debut album on Elektra Records.

Interestingly, the song pricked up the ears of Clive Davis and Barry Manilow. Manilow, who was in the midst of sessions for his fifth album, Even Now, recorded a version of the song in 1977 at A&M Studios. Sadly, the song didn't make the cut and the recording remained buried in the vaults, unfinished until May 9th, 2006, when it was included as a bonus track (still unfinished) for the 2006 Remastered CD version of the album. I've included it as part of this competition as a kind of 'what if' scenario.

The song's other co-writer, Caroled Bayer Sager, would include her take on it as part of her second album on Elektra in 1978, entitled Too.

Buddha Records, who'd enjoyed a string of hits with Gladys Knight and The Pips throughout the early and mid-seventies, were eager to launch Knight as a solo artist in 1978. Her solo debut, Miss Gladys Knight would include a version of I'm Coming Home Again and it would receive a big push as the album's lead single. However, the single failed to catch fire, with its only chart showing being #54 on the R&B chart.

Another artist who gave the song the big push? Dusty Springfield. She included a version on her 1979  United Artists/Mercury album, Living Without Your Love. Recorded in the summer of 1978 and released in January of 1979, the album, a big no-expense-spared Los Angeles production, was meant to be a sort of comeback for the veteran singer who had been living in the United States for a number of years. She was especially eager to reignite her fan base in the UK.
The track chosen to promote the album in the UK was the ballad I'm Coming Home Again, a choice that seemed most apt. The single was released simultaneously with the announcement that Springfield was going to embark on a month-long tour of the UK - her first live dates in Britain in more than six years.

When she arrived in the UK, however, she was met with news that the single had failed to chart and all her concerts in the provinces had been cancelled due to poor ticket sales. Springfield subsequently made an appearance on UK TV's Saturday Night At The Mill wearing a black veil, jokingly saying she was "in mourning because all my dates have been cancelled." She then proceeded to perform the song I'm Coming Home Again, with the comment that the lyrics perhaps weren't as relevant any longer.

After a performance at Albert Hall that resulted in a royal apology, Springfield returned to Los Angeles, where she would remain for the next ten years.
The reason for her failure in the UK at this time? It could have had something to do with her gradual coming out as a lesbian. The controversy which erupted due to the Albert Hall performance had to do with a joke Springfield made to acknowledge the number of drag queens in the audience. The UK's indifference may also have had to do with a sense of nationalism; some felt that Springfield had turned her back on the country which had help make her a star. No matter the reason, Springfield's association with I'm Coming Home remains a bittersweet moment in her canon.

In addition, the song was recorded for albums by Florence Henderson and Joey Travolta (1979) and jazz vocalist, Carmen McRae (1980,) I would have included all three in the competition, but neither Henderson or Travolta have the song on YouTube and McRae's version, stylistically, simply didn't work for this competition.

In the end? The song would never become a hit, although it has become something of a staple on the cabaret circuit.

And that's the whole story.

Never heard the song before, but after listening to snippets, Dusty is always going to win with me. There is just something about her voice so soothing for me..I swear she could sing a menu and it would be lovely.

I have never been a Manilow fan for some reason.

Dusty gets it for me.

Ohhh
It's very torch-y, no? I have never heard it before. I like Dusty's version. The story behind the song is heartbreaking. Her coming out probably had to do with the poor tix sales, tbh. I need to find out more about the Albert Hall controversy.