Weekend Onesie: Back When This Was Shocking... 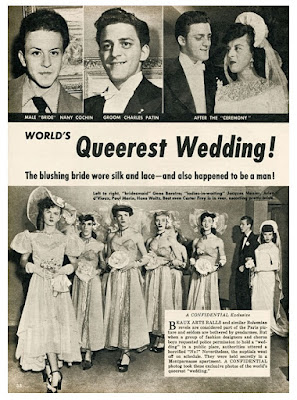 Weekend Onesie:
Back When This Was Shocking...
From inset:
Beaux Arts Balls and similar Bohemian revels are considered a part of the Paris picture and are seldom bothered by gendarmes. But when a group of fashion designers and chorus boys requested police permission to hold a 'wedding' in a public place, authorities uttered a horrified "No!" Nevertheless, the nuptials went off on schedule. They were held secretly in a Montparnasse apartment. A CONFIDENTIAL photographer took these photos of the world's 'queerest' wedding.
Strange how times change... or not.

I don't know about you, but I'm waiting for the day that the conservative right gets their act together and takes on gay marriage again.
Once they stacked SCOTUS in their favor, they wasted no time tackling a few of their favorite punching bags. Yes, it seems, while they don't want anyone telling them what to do (mask mandates, vaccinations) they definitely want to be able to tell YOU what to do (abortion, prayer in school.)
Oh, don't kid yourselves, they're coming for us.
Yes, it seems conservatives keep spinning in place like a child with one shoe nailed to the floor: looking over there, eyeing that, focusing on those people, throwing all their energy behind this or that or the other thing - but by doing so, they will eventually...
Wait.
Wait a minute...
While were at it.
Why do we allow them to wear the banner 'conservatives' - why don't we call them what they really are: bigots, homophobes, racists, hatemongers? Bullies. In a way, it's a good thing there are so many flavors of hate under that umbrella. See, I actually think its a rather long list of fragmented fringe groups - each with a different set of criteria and goals, which is why, perhaps, they can't seem to get their poop in a group long enough to actually accomplish any of their evil goals.
So many targets, so little... what? Money? Manpower? Logic?
Is this really the kind of people the GOP want under their tent?
Yes. Yes, it is.
That's how the GOP insures that they will vote for whatever unqualified convicted liar / con man / thief / charlatan they put up for office. You see, like intelligence, integrity is in short supply at the GOP, so it's no longer considered essential - which sort of undermines that whole 'conservatives' banner, huh?
Anyway, I am just waiting for them to spin back around and focus their Village of The Damned eyes on the LGBTQ+ community. I mean, currently they do have the Transgender Community in their sights (and have for a while - remember when public bathrooms were scary?) - because gender identity is a hot topic - but eventually they will swivel back to the war they lost...
And I don't mean that 'Civil' one.
Thing is... thanks to people like Pete and Chasten, they can't make us all out to be the monsters they tried to convince everybody we were back in the day. As gay folk go, we've come a long way, baby. Far enough, that we're not going back without a fight. And since our focus is clearly defined and we've already proven that we're better organized and more articulate by beating them once... we can do it again.
Which brings to mind another issue... have we, the gay community, become a bit too politically complacent? A bit too comfortable? Shouldn't we be out there, fighting fights that are not necessarily ours, but continue the erosion of individual rights that we've somehow, against the odds, managed to secure for ourselves?
If it's happening, I'm not seeing it. I'm not hearing about it.
I know we're all concerned about the apathetic law enforcement response to the on-going epidemic of transgender homicides. But shouldn't we be doing more? Shouldn't there be a national movement bringing visibility to this issue - the same that we created in the early days of the AIDS pandemic and the drive to secure gay marriage?
I don't have the answer. I don't know how such a movement builds momentum to the point that one day you're seeing posters at your bus stop.
I guess my point is... we don't have the luxury of being complacent. When it comes to gay marriage, we've sat on the beach in our lounge chairs enjoying our pina coladas, savoring our victory long enough.
Because we're a targeted group, we need to ALWAYS be politically active. We need to shine that spotlight. We need to have that discussion. We need to push for action.
It's a new year: 2022, and conservatives think they've figured out ways to seize control, destroy our democracy and turn back the clock to 1952.
Don't let them.
We've got skin in this game...
So let's get back in the game.
Stay strong, stay safe, stay healthy...
-uptonking from Wonderland Burlesque
Please leave any suggestions for what we can do, as individuals, to fight the good fight in the comments section.
Thank you.
Thank You - Alanis Morissette
Posted by uptonking at 6:00 AM

I say thanks to every single out LGBTQ+ American because every time one of us comes out it increases our visibility and makes us seem less "other."
I have faith we will prevail.


We are making progress, just look at the current long term winner on Jeopardy - won over a million dollars, and transgender! So far the people at Jeopardy call "her" the largest woman winner on the show!